If you need more evidence that the mainstream media are corrupt political whores, here it is.
After 7+ years of Obama’s ruinous rule and his spouse’s countless vacations that cost already severely indebted America countless millions of dollars that we don’t have, Time magazine can still publish a fawning article with this nauseating title, “Everyone Is in Love With Michelle Obama’s Amazing Vera Wang Dress.”
The butt-kissing article is all about Mooch wearing a gown designed by Vera Wang for White House’s state dinner for Chinese Communist president Xi Jinping on Sept. 25, 2015. Most of the article consists of picture after picture of M.O., like this one:

If Time magazine actually reported the truth, the headline instead should read:

Everyone Is Agog At Michael Obama’s New Wig That Only Half-Conceals His Massive Trapezius Muscles.

Here’s a close-up of Michael. His massive Trapezius muscle is circled in white:

Here’s a pic of Mooch’s back Trapezius muscles (on her left is Peng Liyuan, wife of Chinese commie prez):

Venus and Serena Williams are professional athletes with strong shoulders and arms, but they don’t have Mooch’s Trapezius muscles.
Michelle Obama is not a professional athlete, but “she” has shoulders wider than the Williams’ and bulky Trapezius muscles typical of males.
It doesn’t take a logician to arrive at the logical conclusion.
I also have this question: How can Mooch go from being flat as a pancake to sporting bodacious boobs? Did he get breast implants?

Thank you very much.

Should the question be asked whether Mrs Barack Obama and Mr Michael Obama are actually human beings?

“Neither shall he regard the God of his fathers, nor the desire of women, nor regard any god: for he shall magnify himself above all.” Daniel 11:37
According to scripture the Antichrist is homosexual

Or, at least, nasty and bi… 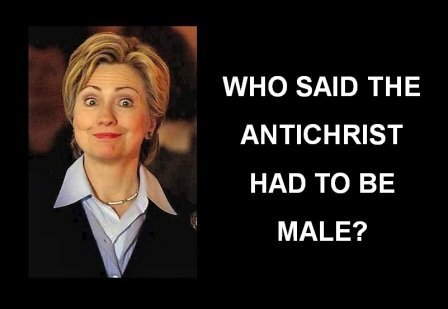 You naughty, naughty people! I’m in with you – Oh – did you see a hint of Adam’s Apple in this? And I think she’s had a “little” work done.

she’s had a “little” work done.
Where?

I’m guessing her’s is bigger than Barry’s…..trapezius, that is.

That is a gorgeous dress . . . if only we could have seen it on a feminine creature. Who pays for these designer dresses? Are they donated by the designer as a PR gimmick? Do the Obama’s pay from their personal funds? Or, do We the People foot the bill? I am almost afraid of what the answer might be.

The dress is gorgeous—FOR SATAN!

When have THEY ever paid for extravagances while they’ve occupied the White House?

Heck, her million dollar dress is pocket change compared to the expen$es racked up by them for all their jetsetting around Hawaii etc for years and years.

The only thing that makes me think she may be a woman is the voice. Compare it to Brucie Jenners. Hard to change that voice.

I dunno-I’ve met several males whose voices SOUNDED female…..True,you can’t change the voice appreciably,but if the voice already sounds softer,higher pitched,it’s not such a change.

If gay men can affect speaking with a lisp, then Mooch too can affect a woman’s voice. From https://www.speech-language-therapy.com/index.php?option=com_content&view=article&id=62:code&catid=11:admin&Itemid=108:
Many gay men are effectively bilingual, and can elect whether to sound gay or straight, depending where they are or who they are with. Just as an African-American individual may switch from Ebonics to standard English, or the other way around, gay people can switch from ‘straight’ to ‘gay’. This is an example of code-switching.”

There are several media photos and stills showing an almost unmistakable “cup” under his dress at his crotch. And have you seen the media clip video of BHO calling him “Michael and I…” ?

Thanks for the reminder. It’s all here:
https://fellowshipoftheminds.com/2014/03/14/michelle-obama-is-a-transexual/

Thanks, I saw that, too, and knew someone would eventually mention it!

For this black dress, it looks as if she learned to keep her clasped hands in front of a potentially revealing area.

Well in all fairness to Mooch, my old lady has trapeziuses to shame hers and still managed to bear me a couple of very fine sons!

Great Dress though – and the hairpiece down the right side of its head compliments it rather charmingly – the turqoise one it wore to greet the pope at AAFB was also nice, although, the skirt on it was a bit too much (I am a seamstress) – too long as it were – perhaps it it had to “cover up” stuff ? Just guessin’ 😉

There’s one way to settle this, once and for all: Obtain DNA samples from the specimen. Not to worry: Progressives can argue with THAT, too!

There’s probably some Executive Order that bars any “outsiders” retaining anything that could provide DNA evidence-Can’t be having some Foreign Government Cloning the First “Family”,can we?

The sudden growth in a bosom is confusing, when she wore a similar dress, she was flatter than a pancake. Miracle bras I guess.

How can a miracle bra create boobs where there aren’t any? I’m confused.
Maybe the Obamas are both shape-shifters! 😀

Apparently, there really are miracle bras because some cross-dressing men manage to squish what they DO have into a reasonable facsimile of cleavage.

Then I dug again to find a photo of Michelle pregnant and I found one of those too.
Then you succeeded in finding one when all others had failed. URL of the photo, please.

Unless Mooch drops the drawers and gives us a looksee we will always be skeptical of its gender. I don’t consider Mooch at all but I will say that I have seen tons of black women and whatever Mooch is, it’s not a pretty sight.

Just look to his hands, his ring finger is way too long to be a females’. Can’t fool mother nature. Proof enough for me.

I don’t know if Michelle is trans-sexual or not…don’t care….but just on the basis of the 2 photos provided…I’d say she/he had some cosmetic surgery…maybe even not some…..maybe….substantial….to the face and breasts and so on……so…..maybe , thus….all those “vacations?”

It can be argued that Venus & Serena are also trannys.

You can also tell by the knees and hands too. “Manly” hands and large knee caps also can give it away.

Oh, hey for you or anyone who’s interested, check out the possible ‘real’ father of Bill Clinton who may be- Nelson Rockefeller. There is also a picture somewhere of young Billy hanging out with H.W. Bush at a Disney opening. Not sure if it’s true, but it would explain a LOT….https://cliffordshack-article-archive-storage.blogspot.com/2012/01/bill-clinton-was-born-on-august-19-1946.html

Here’s a picture of “Bruce” Jenner after his transformation, he’s got a huge trapezius muscle just like “Michelle” Obama: https://www.yahoo.com/celebrity/caitlyn-jenner-studying-womanhood-more-192100481.html

I typically do not add comments to blogs; however, this entire site is extremely racist and ignorant. Never in my life would I have imagined that our country in this day and age has people who are such bigots, racists, and completely uncultured and classless. I believe in freedom of speech, but the things I have read here are completely absurd. People have a right to like or dislike anyone based on their own personal preference, but to degrade someone because of physical features speaks to the level of class and grace of the person speaking/writing. I grew up in… Read more »

“this entire site is extremely racist and ignorant.”
1. You are equating criticism with racism. If Obama were not half-black, I would still criticize him — for his policies and ideology.
2. Ignorant? Point to just ONE thing that is untrue in this post. I dare you.
It is commenters like you that make me ashamed of and despairing about this country.