Obviously Merkel’s fourth re-election is looming on her mind.
From Daily Mail: Angela Merkel will offer cash handouts worth millions of pounds for migrants to leave Germany in an effort to silence criticism of her ‘open-door’ border policy. In a highly-embarrassing U-turn over the ill-fated plan, which saw 1.2million migrants flock to the country, Mrs. Merkel has now vowed to send many of them home.
The German chancellor agreed a package of measures to speed up the deportation process for an estimated 450,000 migrants who have been rejected asylum. The controversial plan, which marks a significant toughening of previous proposals, includes a £76million scheme that will offer migrants cash incentives to leave Germany voluntarily.
Many will see the move as a desperate attempt for Miss Merkel to claw back support ahead of her challenging re-election bid in September.
Criticism of her decision to leave Germany’s borders open and welcome all refugees during Europe’s migration crisis in 2015 has led to a surge in support for anti-immigrant parties.
Flaws in the open borders system were highlighted in the aftermath of last year’s Christmas market attack in Berlin when it was revealed that Tunisian terrorist Anis Amri had been denied asylum months earlier.
The plans agreed by Miss Merkel will allow officials to analyse asylum seekers’ telephones in an attempt to verify their identity, while rules for detaining migrants will be widened. The proposed crackdown, which has been criticised by human rights groups, will also include the creation of a department in Berlin to co-ordinate mass deportations.
As part of the 16-point plan, a number of ‘federal departure centres’ will also be established near airports to hold migrants before they are deported.
Miss Merkel admitted that relying solely on migrants putting themselves forward for deportation would fail to tackle the huge backlog of rejected requests. ‘We rely heavily on voluntary departures, but we know that voluntary departures will not take place if people know that there is never a mandatory return to their home country,’ she said.
The deal was agreed with Germany’s 16 regional governors, who are largely responsible for orchestrating deportations.
Current measures have left officials struggling to deport those whose asylum requests are rejected, largely because they come from areas deemed to be safe, unlike war-torn countries such as Syria.
Of the 170,000 applications that were rejected last year, 55,000 decided to leave voluntarily and a further 26,000 were repatriated.
Read the rest of the story here.
DCG

All too little, too late. Germany altogether let in ONE MILLION Muslims “refugees/migrants”. 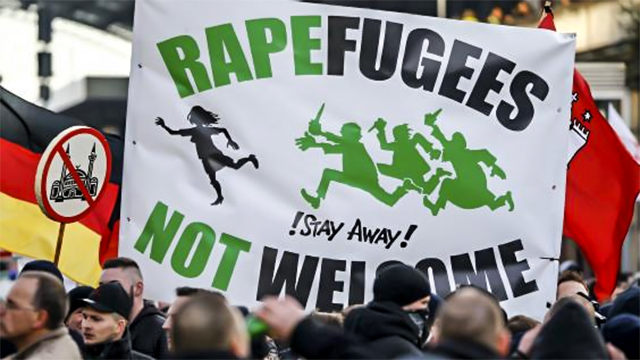 And since they breed like rabbits. That will soon be 4 million.

Funny, but the fakestream media (radio) didn’t mention this, they were saying how Merkle was still ‘for’ immigration. Ha! Oh, and that one with that Prime Minister of Canada saying that they ‘welcome’ refugees, maybe they can all buy plane tickets to Canada. Wonder how fast the crime rates will skyrocket if they go to Canada….

I’m with you on that. After all, they got to Germany all on their own, now they should figure out how to get back from wherever they came from. Many, many of the hoards of Mulsims were not from war torn areas, they were lazy individuals who wanted to reach a land of milk and honey where they would be GIVEN MONEY TO LIVE ON WITHOUT HAVING TO WORK. What sane person really thinks that a society where foreign nationals suck up a living off the working people of that land, and that all will be well with that situation.… Read more »

Merkel is fighting for her political life, her survival depends on her briefly working against her principles involving global tyranny.

Key word, ” Briefly”. She’ll open it up again the minute she wins.

Reblogged this on necltr and commented:
Teufele Merkel is struggling to keep her job, a position calling for destruction of her country. George Soros similarity?

What an idea….
They pay for them to come, they pay for their being there, then pay again to have a few leave voluntarily, which means they can come back and do it all over again? What a racket! For the ones who do leave, a ton more is right behind them and welcome.
This will financially destroy them on top of the destruction already being purveyed by cattle/people foot soldiers like Merkel.

And where is she going to get all this money? It would not be fair to ask the German tax payers to foot the bill to correct the problem SHE caused in the first place.

The big bank of EU of course! I also read they are taking some of the cell phones away from the invaders.

Shappens . . . they should strip these invders of any durable goods that could be turned into cash to pay for what has been expended for having them in Germany and paying for their ouster! I don’t feel the least bit sorry for these invaders . . . they had a plan and worked it for all it was worth.

Agree Lulu.
However some are going over for the food as well….sighs….
It’s basic people/cattling, it worked well in the past and it works well now.
It is funded well and planned for years. The people/cattle foot soldiers are doing their jobs in this, very obviously so.
They are also aware that some will join or have joined the ranks of the invaders/ie…becoming Muslim. This will and is used as a tool by some, however they will not be able to really control it either, it is their frankenstein and it is a flood indeed.

Brilliant, just brilliant. Rewarding for bad behavior and asking the innocents to foot the bill. Like they wouldn’t leave and come back multiple times.
Many come from areas that aren’t war torn, they are just looking for the golden ring.
I am still amazed she is still sitting in office.

I can’t help wondering how much of what she pays them to go home will go right into funding ISIS.

That woman not whole of nothing, or maintains the plan of the masonry.
He has got a problem in Europe, and still without measuring times.
A refugee may not be expelled. They have a special protection. But we know that most are not refugees.
The extradition of a refugee costs the nation of Germany, an average of 8,000 euros for each refugee expelled.
Those moneys should go exclusively to the Germans, tens of thousands of German compatriots are forgotten by Rebekkah (Mama Merkel).
The solution in the electoral vote.

LOL – Well, when you’re sinking in the polls, just go ahead and spend millions more to send people home the German people have been paying to take care of since they invaded in the first place.

Shappens and Dave—my thoughts exactly. However….THIS HORSE has been out of the barn for a LONG LONG TIME….& the barn is NOW “on fire,” and so….none of those horses are going back into the barn. Never. Nada. It is what it is now….& Germany will just have to deal with it with or without the “merkeling” of their nation. IMO—She’s left a huge “merkle” to climb over for generations to come….JUST when they were beginning to climb out of the PIT of WWII..SO many years later….here we go again…..Germany making STOOOPID social and political decisions that not only destroy their… Read more »

Reblogged this on My Blog.

There’s no Men in Germany ?