A computer analysis by TBAF found that nearly half of all 2019 donations (48.4%) and a little over half of January-August 2020 donations (50.1%) to Democrat PAC ActBlue were made by people claiming to be unemployed and not having an employer.

In contrast, TBAF found that only 4% of 2019 donations and 5.6% of the Jan.-August 2020 donations to the Republican Party’s fundraising platform WinRed came from people who did not list an employer or were unemployed. WinRed was created last year to counter ActBlue.

TBAF President John Pudner explains why the large number of donations from “unemployed” people is a red flag that they may be illicit contributions (“straw donors”) from foreign interests attempting to influence U.S. elections:

In response to questions by Fox News, a representative for ActBlue refused to share information about how they analyze contributions, and insisted that “we use an array of data sources, internal validation and third-party services to verify the validity of transactions,” and that many of its donations came from retirees and people who aren’t counted as employed, such as homemakers.

ActBlue, created in 2004, bills itself as a “powerful online fundraising platform available to Democratic candidates and committees, progressive organizations, and nonprofits that share our values for no cost besides a 3.95% processing fee on donations. And we operate as a conduit, which means donations made through ActBlue to a campaign or organization are considered individual donations.”

But the ActBlue website allows credit card donations that are not verified, so anyone from any country in the world can donate without a paper trail.

In fact, the issue of unauthenticated political donations via allowing donors to use largely untraceable prepaid credit cards which could be used to mask a donor’s identity, and to evade limits on how much an individual is legally allowed to give was also brought to light by The Washington Post in 2008.

Pudner said: “ActBlue‘s insistence on refusing to allow banks to verify their donations is an invitation to foreign programmers or others to send money through them using fake American names, and we encourage them to start letting banks verify the identity of donors to stop the potential for millions of dollars to influence our election. We found it took other vendors only a matter of hours to switch their system to allow verification of donations and thus prevent the possibility of illegal foreign money being moved into campaigns. Choosing to use an untraceable system has a higher cost in terms of the risk of credit card fraud and also tends to incur higher bank fees. And this untraceable system allows someone with a gift card to make donations in anyone’s name, even if that person never actually made that donation, or even if that person doesn’t exist at all.“

Director of National Intelligence John Ratcliffe told Fox News that “China poses a greater national security threat to the U.S. than any other nation. That includes threats of election influence and interference.” On August 19, 2020, the daily newspaper Global Times, which is a mouthpiece of the Chinese Communist Party, endorsed Joe Biden for President. (Gateway Pundit)

Bet Soros money is involved in this. 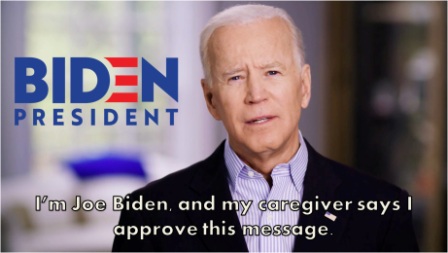 A Sunday news show said that Bloomberg gave $100Million to the Biden Campaign in Florida ALONE. I had wondered how in the hell Biden was pulling even with Trump in that red state… They’re saying Texas may be the next to fall. WHAT? I think those were on “Meet the Poop”, but I’m watching & skipping so much these days due to revulsion of their BIAS, I’m not sure. The biggest $ sources seem to be the big university cities… Big money is also pouring in from out of state to try and elect “Democrat” newbies to the US House… Read more »

All the major cities in TX are blue. They have been moving there from the east coast and west coast for years.

Couple of more points: 1) WinRed is the name of the group on FB asking me to contribute to GOP candidates for Congressional seats outside of my district. Now maybe I will… what’s good for the Left… 2) $346Million divided by 4.77M donors is ~$70-$75 per donor. How much did they send out to supplement unemployment benefits this Spring? It was $1,200 per person originally, then $600 per week for a while, and now $400/wk. Well, until the Democrats + Rand Paul recently failed to pass the extension. Now we know where a chunk of that Democrat-mandated free money went.… Read more »

I do not think there is a snow ball’s chance in Hell that so many “unemployed” individuals donated to the Dems. This is some kind of scam to cover either donations from Soros, or other new world order folks, or foreign governments. I have read on FB just how urgently so many, many of the unemployed need funds to keep themselves and their families going. This really feels like a spit in the face from the Demoncrats to tell us that it is the ranks of the unemployed that are ponying up this kind of money! Thank you for bringing… Read more »

I heard on the radio that Bloomberg is going to contribute $100,000,000 to Biden’s Campaign. I thought that was ILLEGAL.

Excellent point! How can one man exceed the donation limit? So much for Congress’ campaign contribution laws.