London’s murder toll soars to its highest level in a decade, more than HALF stabbed to death in knife crime epidemic

Mayor Kahn’s solution to address the rise in violence? Raise taxes, of course.

From Daily Mail: The number of murders in London this year is at its highest level in more than a decade with 147 recorded – more than half of whom were stabbed.

September and June were the joint bloodiest months of the year in the capital with 17 homicides each, followed by July which had 16 and March and December with 15.

The 2019 rate broke last year’s total of 133 by early December – and is the highest level recorded since 2008 when Scotland Yard investigated 154 deaths. The total compiled by MailOnline this year includes murders and manslaughters recorded by the Met, British Transport Police and City of London Police.

The youngest murder victim was Riley Fauvrell, who died aged just five days after being delivered by an emergency C-section in Thornton Heath, South London. Riley’s mother Kelly Mary Fauvrelle, 26, was stabbed to death in June while pregnant with him. Her ex-partner Aaron McKenzie, 25, has since pleaded not guilty to murder.

The oldest victim was Dorothy Woolmer, 89, who was raped and murdered at home in Tottenham in August. Reece Dempster, 23, was charged but has not yet pleaded.

Some 17 of the victims were children – including 12 teenagers and five youngsters aged under two – and the mean average age of all 147 people killed was 32.

The year began with two murders in the first six hours of 2019 on New Years’s Day, with Tudor Simionov, 33, and Charlotte Huggins, 32, killed in Mayfair and Camberwell respectively. January was the second quietest month for murders with only eight – above only October, which saw six. The final month of the year saw 14 homicides.

Way to make the international headlines. London deserves what they have, they own Sadiq Khan, a raghead Muslime.

If only the victims of the knife attacks had been carrying pistols. I fear that London and the UK are lost

“I was attacked here by people with a big machete and now this man has been killed for no reason. The police do nothing. They just come, take a statement and then they go,” another driver at the scene of the crime told The Daily Mail.”

When the mayor of your largest city, one of the great cities of the world, is named Sadiq, it’s a safe assumption that your days are numbered. It’s almost like having a US president named Hussein. If we can imagine that. But never mind, as long as he’s mayor he might as well raise taxes

Better install more cameras, except for inside mooslime neighborhoods – they don’t commit any crimes 🙄

Or maybe you can tie cameras to a big balloon of yourself and float around the city.

Tie it to this balloon…it will trigger the libs! 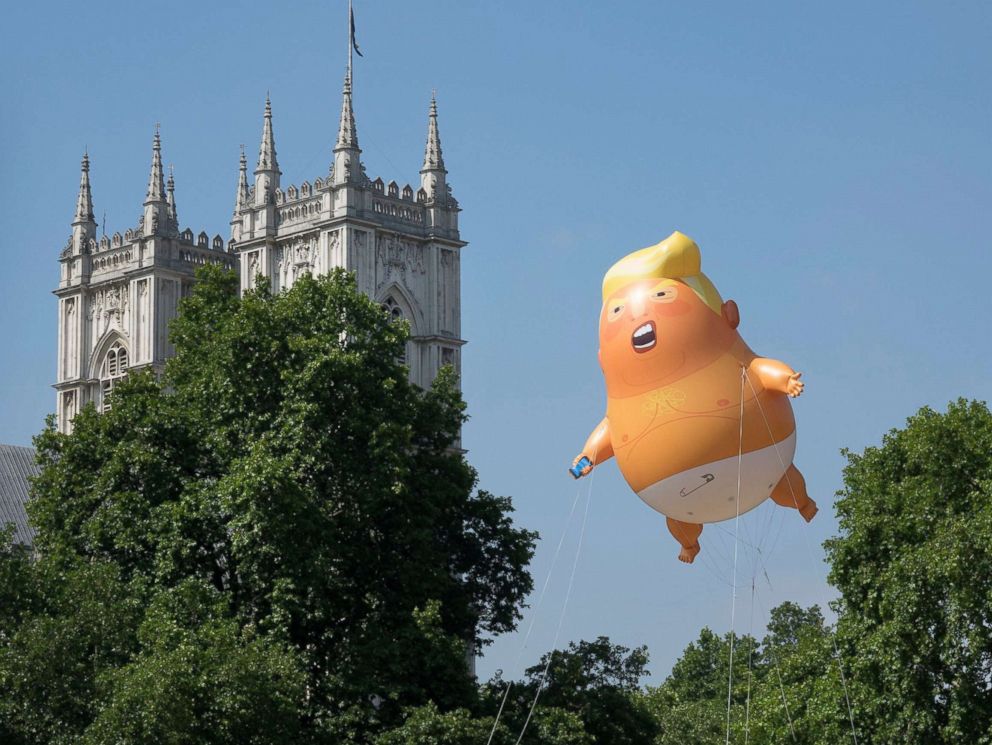 Didn’t someone stab that particular balloon with one of the evil knives that sad dick prohibited? Asking for a friend…..

She’s in bad trouble now. She offended their feels, with a pointed object no less

Childish, stupid, and disrespectful to our president. I know, freedom of expression, but they don’t have a 1st amendment. They don’t even have a constitution. I imagine Genghis Khan approved of this. If he ever comes here we should make balloons of him conjugating with his favorite goat

Khan says there is never a reason to carry a knife. Maybe not in his sanitized bureaucratic world but I can think of many and self-defense is just one of them. And don’t ever tell me that when I’m camping in the woods. Forget knives, if they would make it legal to carry handguns the crime rate would drop like a rock. But of course they are not interested in reducing crime. If they were they never would have allowed muzzies to flood the country in the first place

NEVER trust a muslim with a knife.

As bad as this might sound, “Never trust a muslim”. I know you are aware of this so I say to those that do not. “A Muslim is a Muslim because they follow Islam. To define the word Muslim you say, Muslim- a follower of Islam. Islam is a religion. Not a race. A Muslim is not a race. A person who discriminates against a religion is called a bigot. Not a racist. A racist is a person who who shows or feels prejudice or discriminates toward other races. Not religion. Islam is not only their religion, Islam provides them… Read more »

It is a violent, oppressive political movement pretending to be a ‘religion.’

So self-defense is not an adequate reason to carry a knife or a gun? How will I ever get a new kitchen knife home from Bed, Bath, and Beyond now? Will I have to cut and chop my onions with a baby spoon? Turning your nation into a society full of sitting ducks should be treated as a national security threat.

And they keep being elected!!!

(sarcasm) At least they aren’t using guns to kill people. What’s next, murder by fork? Or spoon???