Video NSFW due to cursing.

Large, progressive-run cities on the west coast all have a homeless crisis: Seattle, Portland, San Francisco, etc. MILLIONS of taxpayer dollars are stolen to solve the problem keep the homeless industrial complex alive.

In September I did a blog post that included two videos from The Michael Anderson Show, where he bravely went out and showed you an entire city block and family bike path that was taken over by homeless.

Anderson is back exposing to the good Portland mayor, Ted Wheeler, another area of his city that is run over by filth and garbage.

The area Anderson exposes is between SE 96th and SE Division. He states that the homeless area stretches around for about four city blocks. This part of the “City of Roses” includes homeless encampments, mentally ill people and trash everywhere including needles, feces and material that is a generally a health hazard.

This is odd considering that Oregon taxpayers are giving the bureaucrats $31 million to fund the Joint Office of Homeless Services. Why do private citizens need to cough up extra monies for garbage collection when they are already contributing MILLIONS of dollars to the homelessness?

The saddest part is where Anderson interviews a US military veteran and he states that many homeless have drug issues and they just don’t want to be helped.

Anderson goes on to describe the amount of money the city has spent to solve NOTHING.

It’s a vicious, vicious cycle that progressives are not willing to solve. After all, someone’s gotta keep that homeless industrial complex alive.

so where is all the money going?

They spend money on staff for their internal homeless agencies, give money to other homeless service agencies, give rent assistance to low income, hire park ranger staff to patrol the parks, a complaint system that citizens use to report homeless, hiring a person “to collect data and manage external public customer service relationships,” and of course shelters.

I’d bet the majority of money goes to bureaucracy, as that’s how government works.

The ones paying for the clean-up are probably most affected, (in close proximity), by the liberal-induced filth whereas the ‘elite’ never have to walk by, drive by nor see the filth even at a distance.

The millions can be found amongst the politician’ pockets and doing fine. Leave it to the left, Except the politicians, everybody will be one and the same, poor, the government will be the sole provider, more homeless and crime on the rise, what’s left in the backyard today won’t be there tomorrow, that will be the means of survival, the ruling millionaires in the government don’t care, forget California and Oregon and Washington, that’s the way “they want it” and for us, countdown, , let’s go out en masse and VOTE, REPUBLICAN.

And for your evening entertainment:

So, nobody can clean up the streets? They can’t deal with the homeless? At night there are thugs on the streets? The cops just stand around and watch. They could at least be giving tax refunds.

Meanwhile, the police there are seeking not to arrest the Leftists who attacked this old man but the old man himself for not yielding at the crosswalk like the Leftists illegally wanted:
https://www.youtube.com/watch?v=sq-dcJrnGTM

Just watched that video, it’s beyond my imagination!

Left/libtard may stands by letting his brethren run riot:
https://m.washingtontimes.com/news/2018/oct/14/ted-wheeler-portland-mayor-stands-decision-allow-a/

Maybe its time for a “Citizen’s Vigilance League”? I think they still have enough old hotel balconies with suitable guardrails for ropes. My guess is that it would only take a few and the rest would scatter like roaches.

This election day: Jobs, Not Mobs 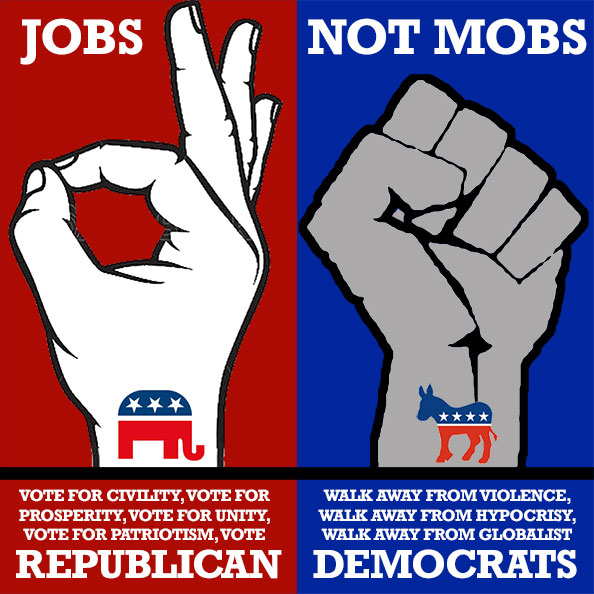 Speaking of Democrats and jobs, anon, they know how to give full employment – so long as it’s your money they are spending. Take the below for one example of Democratic “help”. “Four Women [with Mexican names] Arrested In Texas For Running Voter Fraud Ring Which Targeted Seniors” Going out to get the old people to sign up to vote by mail, and they were then thought to be “harvesting” the slips in order to get the votes cast for whomever they chose. This article doesn’t say it, but I read elsewhere that they were all Democrats, which most Mexicans… Read more »

The New Democratic voters and homeless election fodder are on the way.

“Caravan of over 1,000 Honduran migrants sets off walking toward U S border”

Where is Sam Houston when we need him? There ARE WAYS to stop them.

Why all the pretense that there are not?

That’s an interesting question. After all, if we were “at war” and the “enemy” were storming our border, would they stop them? I think they would. I have crawled under live .50 cal. machine gun fire. It would have an amazing negative effect. This is all a game. They are conditioning people to accept that there is nothing they could or should do to stop this. The game is SO obvious I don’t know how anybody misses it. Having “non-countries” full of disparate populations with no allegiance to themselves or their neighbors is the end game. We are all supposed… Read more »

A medical question. Is it possible to dumb to death?

Well, their Mayor today said that he is glad that “the police” made the decision to stand down. So they are pointing fingers at each other.

Check out the new travel commercial:

The mayor should be embarrassed. He won’t be though because the mob rules him.