I will comply! Never was a fan of hers and never will be.
I’m also sick of Yahoo’s bias reporting. Ugh.
From Yahoo: While once upon a time stars were advised not to ruffle feathers by expressing political views (or other topics deemed controversial) for fear of hurting their brand, that time has passed. With Donald Trump’s controversial election win, which only a handful of Hollywooders were excited about (see: Scott Baio), and the unpopular decisions he’s made since he took office, we’ve entered what can only be described as the “take no crap” era. Celebs aren’t having it in any way, shape, or form.
While some famous folks have always clapped back at their trolls, we’ve seen even more come out swinging recently. And they’ve moved past the polite “unfollow me” response. Things have escalated to: Don’t like me or what I’m saying? Don’t be my fan. Don’t watch my show. Don’t go see my movie.
May we point you in the direction of Ellen Pompeo‘s feed. On Monday, the Grey’s Anatomy star didn’t pull any punches when she tweeted to her 1.3 million fans: “News flash… I don’t want Trump supporters for fans. Einstein.”
It started when the TV star, 47, shared a story about an 8-year-old biracial boy being the victim of an apparent lynching.
The hashtags that Pompeo, whose three children are mixed-race, used must have gotten folks riled up (again, she wasn’t pulling punches, using #gof*ckyourselvestrumpsupporters and #especiallythewomen). But she was in a “don’t come at me” kind of space.
Her blunt replies led to some followers questioning whether she was hacked. She wasn’t. As she explained, she’s just “straight savage when it comes to doing the right thing.”
Pompeo has become more politically outspoken than in her early days on her doctor drama. She was vocal about getting people to the polls prior to the election and obviously even more so after Hillary Clinton’s loss. Who can forget her headline-making tweet to Ivanka Trump about Jared Kushner? Not us. But, hey, it fits with the whole “straight savage” thing.
Olivia Wilde, who’s currently starring in 1984 on Broadway, has long been politically outspoken — and has protested several times this year, including outside Trump Tower in NYC in August after the president defended the actions of white supremacists, neo-Nazis, and the KKK in Charlottesville, Va. It was around that time that the actress — whose mom, Leslie Cockburn, is running for congress in Virginia — addressed “Trumpy Trolls” who had apparently been hassling her and threatening to boycott her work.
Not only did she tell them to go ahead and boycott her movies, but Wilde, who has 1.85 million Twitter followers, did so along with the middle finger emoji. Nothing ambiguous there.
Read the rest of the story here.
DCG
Please follow and like us:

you got it, chickee

Reblogged this on Site Title.

LOL Does anyone in the world actually give a rat’s ass what she or anyone else thinks about our political situation?

Who is she? Never heard of her.

Okay, we can’t be your fans any more, but at least give us a list of your sponsors so that we can buy their products.

Never heard of her.

Ellen Pompeo is the leading actress in the long-running ABC medical drama Grey’s Anatomy (she’s Grey), from 2005 and ongoing, for which she’s paid $350K per episode. That’s how she accumulated an estimated net worth of $35 million.
https://www.celebritynetworth.com/richest-celebrities/actors/ellen-pompeo-net-worth/

Just another ding bat actress who does not grasp the fact that the greater masses supported Trump. I wonder, did she make that foolish promise to move outa the U.S. if Trump won? Be a lot less whining going on if all who did, would.

Glad you don’t care if we’re fans or not, since you lost relevance a long time ago. What was your last blockbuster/claim to fame again? yeah, I can’t remember, either.

well time will tell if her fans that support Trump will fly away from her…. 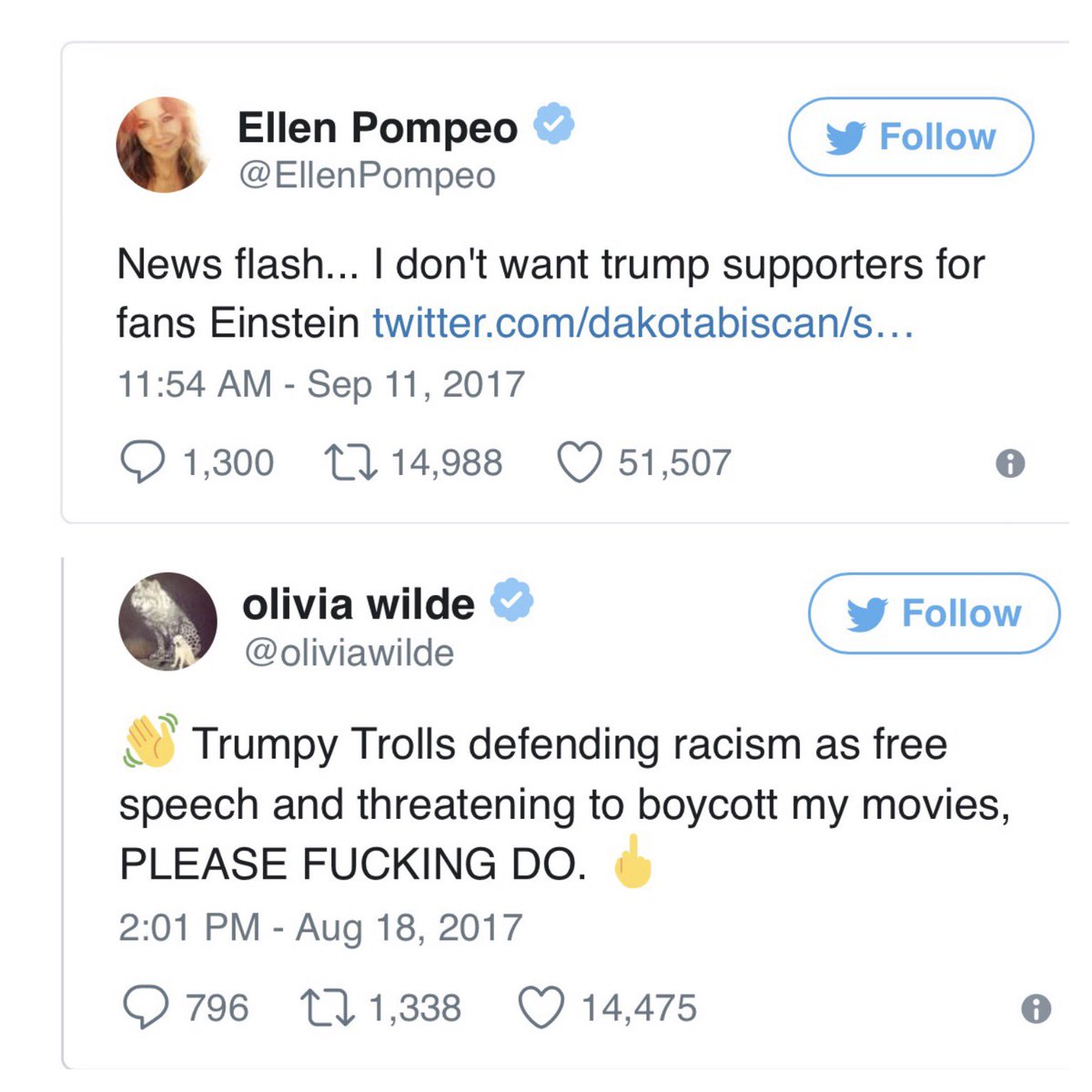 Ellen who?
Let’s paint her a nice lavender-purple. She can become a SMURF!

Well Ellen, no problem there. We haven’t been your fans for a long time. She really needs to get that chip off her shoulder about racism and read about it. She will be surprised just what group, Dems, were hanging blacks. She will find what party fought for equal rights, Reps, and which party voted against it 100%, Dems. If she would actually read up on the President, she will find awards and honors he got from blacks for fighting for them. She will realize three of his first hires were a woman, a black man and a gay. If… Read more »

Golly, I guess I no longer have the privilege of being her “fan”. What a moron. It’s one thing to chase every fashion, idiotic or not, but opening one’s mouth and showing the world how ignorant one is confirms my suspicions.
She’s a total tool.

“…we’ve entered what can only be described as the “take no crap” era. Celebs aren’t having it in any way, shape, or form.” Exactly, because that would be direct competition to the crap they make. I actually feel sorry for these folks. The whole Trump election has caused a surfacing of what appear to be several psychological problems that have no doubt been carefully hidden from the public’s view until now. They seriously need help. I will try to pray for them whenever I think of them, which is rarely. As for Yahoo’s bias to the left/anarchy and Trump bashing,… Read more »

It’s really very instructive. They are making a big push. This shows who works for who. Those who whore for The Empire must cuck for Soros and his owners. Those who still want to be their own master are in direct opposition. There is no “common ground”, how could there be?
Building potential and utter destruction are opposites.

Wouldn’t you like to bring one of these girls home to meet Mom?

That is so freaking nauseating!! What is wrong with people!

This is the future they want for us. No God, just “The State”. Do as thou wilt.

Don’t know who she is and don’t care!

I heard of that show…..once. Never seen it. Was it any good? Oh, never mind.

She also hates her own race and culture. She even posted a photo of her mulatto kids with the caption “in the future all of the babies will be brown”. Everything she posts is anti-white and pro-black power lunacy. She is a self loathing, self hating yet narcissistic sack of brainwashed leftist s**t!

Living proof you can be white trash and have $35M. Hell, they pay fetchers that much. She doesn’t even have to run. She just has to be her obnoxious self.

Well, I’ve been watching this show since it’s inception despite the fact that Pompous Ellen is the ‘star’. I have last week’s episode waiting on my DVR and am anticipating the show will end next year with wrap ups and past star performances. But….in order to give Ms Ellen what she desires; I can end this series for me and for her right now without any problem. If other fans of this show have any sense they will give this 🐝what she wants. If enough of us do this…..we can tank this show and put IT and US out of… Read more »