This confirms our suspicion that when the Left say they didn’t really mean the death threats against President Trump, they are simply lying,
In May of this year, so-called comedienne Kathy Griffin posted an image of herself holding President Trump’s severed head.

When the image went viral, Americans reacted with outrage and disgust. Griffin’s upcoming live “comedy” tour was canceled, CNN dissociated itself from her, her showbiz friends (including BFF Anderson Cooper) condemned her, and the Secret Service began an investigation — rightly so.
So Griffin issued a public apology and begged for forgiveness.
In August, after the Secret Service concluded its investigation and decided against prosecution, forked-tongue Griffin promptly retracted her apology and portrayed herself as the victim:

“I am no longer sorry, the whole outrage was BS. I lost everybody. Stop acting like my little picture is more important than talking about the actual atrocities that the president of the United States is committing. I didn’t just lose one night on CNN. My entire tour was canceled within 24 hours because every single theater got all these death threats. These Trump fans, they’re hardcore.”

In other words, Griffin’s apology was a lie.
Having already retracted her apology, Griffin is doubling down.
Page Six reports, Sept. 29, 2017, that Griffin now wants everyone to know that not only is she not sorry for posing with a mockup of President Trump’s severed bloody head, she “didn’t do anything wrong” and blames the backlash she received on Americans’ “ageism” and “sexism” and the very person she had victimized — President Trump, whom she now accuses for violating her human rights.
In an interview with the UK Guardian, 56-year-old Griffin self-righteously said:

“I took a picture that you or anyone of your friends could make. I put it online and was under federal investigation for conspiracy to assassinate the President of the United States of America. I didn’t do anything wrong. It’s insane and I truly believe if it happened to me it could happen to you. I will not be convinced this was not a straight-up case of sexism and ageism. I really think Trump went for me because I was an easy target. I will openly accuse the President of the United States of human rights violations.”

With a net worth of $20 million, Kathy Griffin now fancies herself a communist revolutionary, posing for the cover of The Guardian dressed as Che Guevara, the Argentine Marxist who ruthlessly hunted down and killed perceived deserters of the Cuban revolution.
~Eowyn

And forever a victim.

That wanted poster mean I could get 20 million for her head?
Still just don’t know what all the atrocities they claim Trump is or has committed are.

She is a dried up old has-been trying to rekindle a finished career. The only person to blame for her failure is herself and we all know it and no one is buying her excuses or her lies. What atrocities has this President committed? They come out with all kinds of accusations with no facts to back them up. Obama committed fraud, misconduct and several acts of treason and many members of Congress have acknowledged these facts but not a peep from Griffin or her buddies. These accusations can be proven and have been proven, Congress just refused to act… Read more »

I see she still has a twisted sense of justifying her actions. It is someone else’s fault.
She claims she did nothing wrong, WTH would you call it?
I wonder what her thoughts would be if someone did the same thing to Hillary’s or Obama’s head. I expect,she would come unglued.
She needs some serious therapy.

Remember this is the woman, raised in Catholic schools who once said when winning an award, “I don’t give any praise to Jesus for this, it’s all my doing,” or something similar. She is a perfect example of dung who is ruining the American culture.

I Never like to use the term = “Ignorant-Idiot-B-itch” when describing such a mouthy fool, = but she forces me to say them.. Then there is “The Media” = I am at a Loss for de-grading Words to describe that bunch of guanno..

I think “bunch of guanno” fits them to a tee. Well-put!

I wonder what the response would be if the UK Guardian ran a picture of Kathy Griffin holding up the severed head of the Queen?

Maryaha . . . Very good point. There would no doubt be an international incident betweed Great Britain and the USA. This woman is just vile. All people need to give her the same treatment that we give Hanoi Jane.

Why can’t she just accept the fact that doing what she did is gross, horrible, degrading and just simply not acceptable behavior.

At last! A white dindu.

We can’t say it enough. These people are insane. Thirty years ago they’d have been locked away weaving baskets.

Trump gets the last word… 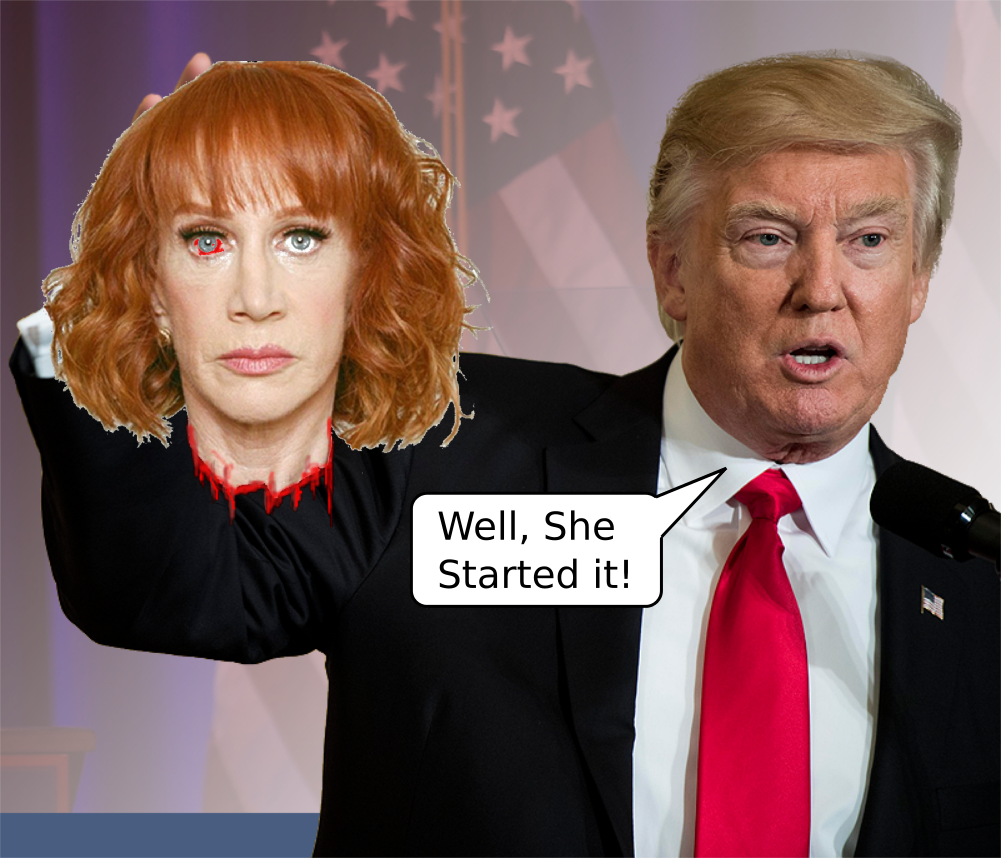 She can blame whatever she wants-I-don’t-care. What she did was WRONG,and if any of US did it,WE’D be getting investigated too.

“Atrocities” = turning back the clock on “progressive” crap the counter culture has forced upon American society, aided & abetted by the liberals in the White House, Congress, and the SCotUS for the past 44 years or more (with brief respites)… as demanded by the outsiders in society (those who perceive they’ve been denied some sort of rights by “those in charge”), encouraged by the immoral morons (“immoralons”?) in the media & entertainment sectors. And then when it appeared there was much money to be made off these toads, both high-tech and big business began catering to them — witness… Read more »

Hey, Kathy Griffin, do you need a LICENSE to be that damned ugly! My God, a ZEPPELIN is overhead!!!
Oh the humanity!

Steven . . . truer words have never been written. Although she has had plastic surgery, she truly is one of the most ugly women to be seen on public media. She has what has previously been referred to as a “horsey face.” The elongated head, with coarse features.

A horse is a horse/Of course, of course!

Kathy was only sorry that the stunt backfired on her…..

Wow, ugly and unfunny all at once.

stlonginus . . . let’s just hope that that was the very last award she will ever, ever have to give an acceptance speech for. Let;s just hope that the American people have a very long memory, and that they do not support any project that she appears in.

It’s pure narcissism. They are so full of themselves, they actually believe what they say. A sane person thinks they must be psychopathic liar, cause no one could really believe that, but they do. They are following the father of lies, the first narcissist.

Ageism? It appears that KG is the one with a problem with her age. Who even mentioned her age in all this? SHE DID. Before she pointed it out, I didn’t know how “old” she is. (Not that old, imo.) What does her sex have to do with it? Here she is, 20 years younger than Trump and of the opposite sex, and she’s the one who attacked him, so doesn’t that make her a sexist and ageist? As DT would say: What a loser.

SapphireSunday . . .Amen to that! She is indeed exibiting the “sour grapes” effect for having the FBI look into her lack of any common sense. I would be embarrassed under these same circumstances, in fact I would not go out of my house, except in disguise.

Are we sure Kathy is real and not just Bill Nye in drag?

If she lived in any of over half the countries on this planet and did that to their leader she would not have been investigated. She would have been disappeared. She owes what ever she has to living in the Freest, most benevolent, most successful country that has ever existed. If she really wants to make a difference, she should work toward abolition of slavery and human trafficking the world over. Work in a homeless shelter. Give some of her millions to devastated Puerto Rico. Or any of innumerable causes. Instead of being a selfish spoiled ASS.