Cats of the World Unite!

A very wealthy man in that socialist paradise called the People’s Republic of China — a billionaire — died from eating a dish of slow-boiled cat meat stew.

The AP reports from Beijing, Jan 3, 2012, that Long Liyuan, 49, died on Dec. 23 in China’s booming southeastern Guangdong province after sharing a dish of slow boiled cat meat stew, “a southern delicacy,” with two men over a business lunch.

One of the men, local official Huang Guang, was arrested by police on Friday on suspicion of poisoning the hotpot with a toxic herb, Gelsemium elegans. Police say Huang and Long had economic disputes and had met for lunch to discuss a business contract. Long, who ran a forestry company in Guangdong, wanted to lease a piece of woodland and develop it.

All three men were sickened, but Long died because he consumed more of the cat stew — and thus, more of the poisonous herb. The third man at the table, Huang Wen, a friend of Long’s, was quoted by media as saying he had only eaten a little because it tasted “more bitter” than usual.

Long, who ate more than the others, soon felt dizzy and sick and was taken to a hospital where he went into cardiac arrest and died.

Police initially detained the restaurant’s owner on suspicion of serving unsanitary food. But the businessman’s family refused to believe it was a simple case of food poisoning, pressed the police to investigate further and offered a reward of 100,000 yuan ($16,000) for information about his death.

Gelsemium elegans is a poisonous plant found in forests in parts of China. Gelsemium is a genus of flowering plants belonging to family Gelsemiaceae. Appropriately, G. elegans is nicknamed “heartbreak grass.”
Read about the horrible cat-meat trade in China, here.

Hey Doc,
My two cats are giving me high fives over this story! They really like the animation of a kitten going Stallone! 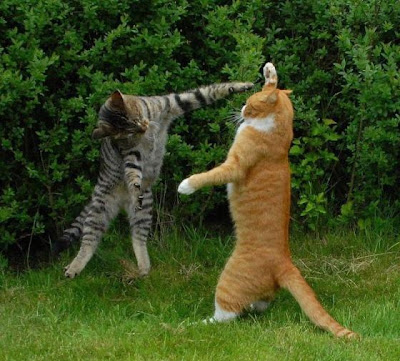 That’s what they get for eating kitty. Dogs are vulnerable too. Dog is a delicacy in the Philippines . We had to keep our dog under lock and key. We lived in a compound, and eachhouse had a gate and stone wall with lock. However, locked gates never stopped thieves. We still went out with him whenever he needed to do his business and get some excercise. Long live cats and dogs. They rule!

Heh, I guess you could say he got a hold of some bad cat chow.
-Dave

Ya gotta love that cat….bully for him!

Too bad so sad. Hope he choked on some of it too…

its a blessing i love this story poor little cat anyway its ashame they do that that should be ruled out ban once and forall.