On November 6, 2017, RINO Sen. John McCain was seen wearing an orthopedic or walking boot on his right leg because, we were told, of a “minor tear” in his right Achilles’ tendon.
Coincidentally (or not), Hillary Clinton also has an orthopedic boot on her right foot, ostensibly because she had broken her right foot’s big toe when she “ran downstairs in heels and fell backward”.
That both Hillary and McCain are wearing clumsy walking boots led to speculation in the Alternative Media that their boots are not for a torn Achilles’ tendon and broken big toe. They have those walking boots on to conceal their ankle monitors, like the one below. See “Are Hillary’s and John McCain’s orthopedic boots actually ankle bracelets?”

McCain switching the walking boot to his left leg simply reinforced online speculation about an ankle monitor. Old people’s skin gets very thin and easily bruised. The ankle monitor probably was chafing 81-year-old McCain’s skin, so he requested the monitor be moved to his left ankle, thus necessitating a walking boot on his left leg for concealment.
In a tweet yesterday, McCain admitted that he’d switched the boot from his right to left leg.
And the reason? — to give his left leg “a break” because it was doing extra work to compensate for the boot being on his right leg.

He must really think us to be stupid.
Some choice tweets in response:

tbswisher: “Orthopedic boots are to stabilize bones…not overworked muscles. Try again..”
Johnny: “Your explanation is to cause more strain to your healing torn tendon foot? You do realize how ridiculous you sound right?”
Straight Shooter: “I wore a boot for 6 weeks after a while it wasn’t a big deal! You get used to it! Certainly wasn’t advised by my surgeon to switch which leg I had it on!”
Cynthia Lovely: “Wearing a boot is exhausting. But how in the world does switching it help?! Put the burden on the actual injured/just healed leg b/c the other got tired?! Absurd!!”
WWE4LIFE: “Why you always lying?”
ILOVETheDonald: “Did someone come to your house and switch it to the other leg? Was it a LEO? GPS moniters that size can’t be left on for too long.”
Prospective USA: “Is the boot there to hide your ankle bracelet……”
Sherwood57: “Whatever! You know none of us believe that shit. Stick your head in the sand, John.”
Texas Sheepdog: “Did you tweet this out because you’re going to try to claim mental incompetence to avoid prosecution? That’s what it sure looks like… but it’s not going to work. For just once in your life, how about you grow a pair, man TF up and face the consequences of your actions? Coward”
ANNORA11: “RETIRE !!!!!!!”
Bradd Powless: “Another lie to coverup a lie.”
Viva Covfefe!: “Liar!”
Deplorable Rocketman: “How strange. I work in a hospital and all the doctors think you’re full of it. How’s the ankle monitor?”
mike diaz: “LOL nice try man but no one believes this shit”
Did I say that?: “I thought you were dying?”

There seems to be something extremely big on the horizon, and a complete blackout on it except for some clues like this.

I find this man utterly disgusting, and I also find Roy Moore to be the same way but for very different reasons. Ugh.

Explanation makes NO sense. If you are going to give your leg(s) a break, you just leave off the boot for a day or two. You don’t put it on the uninjured leg. Idiotically stupid or he thinks we are.

It’s even scarier if it makes sense to HIM!

Once someone kicks their Credibility into the storm-drain,it’s GONE! Nothing they can say will undo that. McLame’s branded himself a LIAR,and he’ll NEVER be considered Credible again.

Either that or da toomah has gone to his head…

No kidding, really??? Hahahaha, he did a swift Hero?

Actually, “swift hero” is funny in its own way!
If you want to split your sides laughing for a while, look up “best of Damn You Autocorrect”. It’s PG-13, but SO funneh!

Actually, if we could get him to bend over and can find someone willing to temporarily wear it, we could get it implanted real good, right where it belongs.

Right up his alley 🙂

If Johnny thinks this is a credible explanation, and expects the “stupid” public to buy it, then he is more stupid than I thought!

Lying comes naturally to him, it’s his element. Just like a fish is at home in water, Johnny Wet Start is comfortable with lies. He lies even when he doesn’t have to.

I dunno-it’d be damned hard for him to be more stupid than I thought…..

I never thought I would ever give any credit to Barack Obama, but I must give credit where credit is due: Barack Obama (as awful as he is!) prevented both John McCain and Hillary Clinton from becoming President. For that alone, we are forever in his debt: Not to give the criminal the justice he deserves is to actually offend God and to put that criminal’s salvation in dire jeopardy. (Not that Obama is interested in Salvation, anyway). So perhaps President Trump can go after Obama, once time allows. That being said, I must admit it took me a very… Read more »

I’m afraid I’d have to “amend” that to say that Obongo’s owners prevented The Hildebeast and Moonboot McCain from getting in the driver’s seat. It wasn’t in the script. I don’t give Obongo “credit” for anything other than sucking up perks and ruining the country.

Actually, I can basically agree with your assessment, upon thinking it over. But then again, the “Real Owners” that George Carlin once referred to put ’em all up; All Obama had to do was charm enough of the public. And although he is a liar to the core, he never was a RINO like McCain, or an overt buttinski like Hillary.
I actually believe the Real Owners really wanted Hillary.

Thanks for the response. For me, I don’t know. It all depends on whether one believes that people still elect representatives. I don’t believe that anybody can survive that process or even be allowed to participate without approval from The Cabal. I know that many do not agree with that, and I know that most would prefer “hope”. So would I, for that matter, but I see what I see. To me it only makes sense in this context. Many of these things are absolutely simple to fix. So why don’t they? Well, the easiest answer is that they are… Read more »

Hey,that reminds me-Since the O got pretty much all his wealth fraudulently,when he’s Convicted will he have to forfeit it to the Feds?

Could McCain, HRC, and Chelsea be playing games of deception? What is happening at Langley? Our news of the day, fake or true, is unimaginable for most people today let alone 1960.

Toby Keith; “‘Cause we’ll put a boot in your ass
It’s the American way”

This man is clearly demented, and a danger to National Security. I’ve had enough of his b.s. His mediocre intellect combined with bullying influence on the Senate Armed Services Committee places millions of people in danger right across the Globe. Bottom line is John McCain is a war criminal and a traitor. He’s got to be removed from Office and made to pay the price for his crimes. The American way would be rope and a pine tree…

It’s even “better” when his soulmate, Light-In-The-Loafers Lindsey is around. I’d be afraid to be in the same room with them breathing the same air.

I suppose since he’s in Arizona a cactus will do.

I was unaware that McCain was criminal charged for doing something. What did he do?

Good question, True George.
May have something to do with the $1 million donation by the Royal Embassy of Saudi Arabia to McCain’s foundation, the John McCain Institute. McCain is an outspoken ally of Saudi Arabia and promoter of U.S. military intervention in Syria on behalf of the Saudis.
The donation happened in 2014 but wasn’t publicly disclosed until April 2016 in response to press inquiries. Asked about the $1M donation, McCain got very defensive and cut off all questions.
https://stateofthenation2012.com/?p=67466

Those mansions in Sedona are hard to pay for on a Senator’s salary.

“McCain got very defensive and cut off all questions.” That’s a Confession,minus the actual words.

George, did you just come from Uranus?

I guess so; why is he wearing a ankle monitor?

I heard he is a pedophile and him, Hilary and Chelsea Clinton are under secret indictment over Pizza gate…not sure why Bill wasn’t included
Even though I heard Pizza gate was fabricated a couple of months ago.
But it’s all hearsay. Those figures will not do prison time 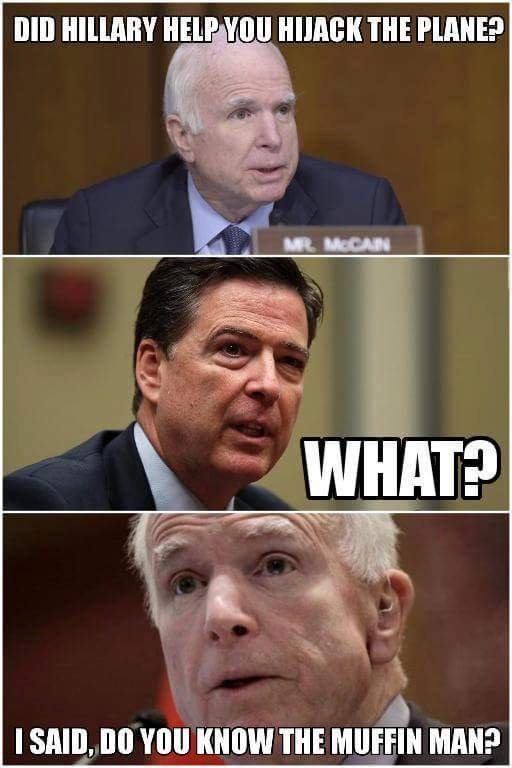 Boot? What boot’s that?

Newsflash! John McCain switched from Republican to Democrat to give the Republicans a break.