.@JoeBiden suggests that, instead of shooting center mass, cops could shoot to maim, like "in the leg."

Cops are specifically trained not to do that. pic.twitter.com/fIynY8ChH6

If you’ve had firearm training, you know how all kinds of wrong this is.

First of all, one of the basic firearm safety rules: Never let the muzzle cover anything that you are not willing to destroy. There’s no safety rule that says, “point the muzzle only if your goal is to maim.”

Secondly, try hitting a leg (faster moving and smaller target than center mass) when you are faced with an escalated and possible life/death situation.

Third thing: Shooting someone in the leg is NOT de-escalation.

Fourth, after you’ve tried this “de-escalation” technique and have thoroughly pissed someone off after “maiming” them, this may not stop them from approaching you with a knife nor from drawing a concealed firearm. In which case, they may still be coming after you.

But this is liberal logic for ‘ya. It’s not designed to make sense.

if the thug has a full auto he could still get off 20 shots and its bye bye fool. center mass== split second drop

Hey, Im a bad shot, your honor….I was aiming for his left foot, and hit him right between the eyes….sorry.

WHEW!!! Glad to KNOW IM NOT the ONLY one with that “problem”!

Par for Joe and firearms:
https://www.youtube.com/watch?v=oOpj-BEPnSg 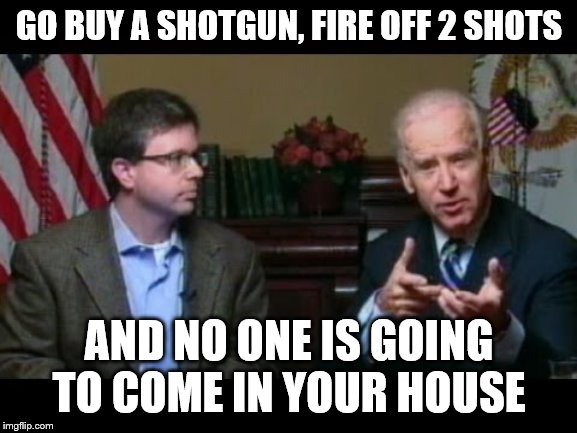 Joe Biden’s father should have shot the load that made him into his mother’s ass…. Biden is what my grandpa would have called a shithead…. If I had a dollar for every time I have heard someone say why didn’t the cops shoot the guy in the leg I could buy a new truck

Yeah-great idea. Shoot a criminal in the leg,he/she sues everyone who might have a dollar to lose for millions of $$$$,lives the rest of his/her life like royalty,thanks to a carefully sought out LIBERAL Judge.

Even better, have the cops trained to shoot the gun/weapon out of their hand like in the old cowboy movies.

Joseph Magil
Reply to  the Bruce

Just set phasers on stun. Or learn to do the Vulcan nerve pinch.

What a dangerous cretin he is. Rule Number ONE, (No not THAT “Rule #1): The twenty foot rule. Furthermore, if you whack a .40 cal JHP into someone’s upper leg, there are a couple of distinct possibilities: The bullet will chew up the Femoral artery whilst in transit. Death by bleeding out will occur in minutes. The bullet misses the Femoral artery and smashes the Femur itself, whereupon, a. the leg will collapse under the weight of the BG, b. “Secondary missiles” (bone fragments) will punch a bunch of holes in the Femoral artery causing considerable “leakage”. AND / OR… Read more »

The femoral artery is in the leg. Put a bullet through it, you’ll bleed out in five minutes.

Absolutely correct. At age 26, while w/2 friends in the redwood bush 35 miles from Garberville, CA, practising 5 round target shooting w/our handguns, on my way back from the target after firing a string my High Standard .22 cal target pistol went off while in my holster, w/the safety on! I only used hollow-point long rifle cartridges, so after it hit my R femur and spread I was unable to walk. My friends took me to the only clinic in town, and the MD on call said I was miraculously blessed: had it been a centimeter away from the… Read more »

Don’t know IF your still in Canada or what. Get with a group of like minded folks and BUILD your selves a COMMUNITY BUNKER!

Here is a video that I thought was very funny:

I thought it was funny because the video was making fun of Joe Biden. (The old man in the video is really a young man wearing a mask.)

biden wouldn’t know the business end of a roll of toilet paper, never mind a weapon. are we all surprised he doesn’t use a jock strap for a face mask??

This is the same guy thqt said you don’t need a handgun or a rifle. A shotgun is all you need. If someone is threatening you just go out on the front porch and and blast a couple of rounds into the air and that’ll scare ’em away. Hey Joe. A 7 year old boy was killed in our town when, while out celebrating the 4th of July with his father, by a random bullet from perhaps a half mile away that, someone still unknown, thought shooting their gun into the air in a celebratory manner was a good idea.… Read more »

all cops should just quit. with zero bail. what’s the point? Besides most of the victims will be those that voted for it. It’s going to be great. just like mad max beyond thunderdome.

Ted Nugent has rightly observed that these anti-gun nitwits are wrong to begin with. But in addition to that, he notes they know nothing about ballistics or forensics. Shooting someone in the leg DOES NOT DEESCALATE a bad situation, especially if the one shot has a gun. Responsible gun ownership entails a lot of training. It entails an etiquette and a moral code. It requires a good knowledge base of ballistics and forensics, and of knowing when and when not to shoot, not just where to shoot. But we all get it: Joe Biden is an absolute moron, a genuinely… Read more »