Once in a blue moon, some actor would break the conspiracy of silence and say out loud that Hollywood is run by Jews.
And that actor would then be vilified, demonized, and then ostracized.
Every. Single. Time.
The most recent example is Gary Oldman, 59, the acclaimed British actor known for roles such as Sirius Black in the Harry Potter series, and the righteous police commissioner James Gordon in the Dark Knight Batman reboots.

In a Playboy interview in 2014 in which Oldman, refreshingly, called acting “just a job” and that he’s a “regular” person with financial responsibilities and children, he made the mistake of criticizing Hollywood and defending Mel Gibson, who earlier had received “the Hollywood treatment” for his “anti-Semitic” rant in 2006. Oldman said:

“There’s a lot of nonsense behavior, especially in a place like Hollywood. The money, the power, they create little monsters…. I just think political correctness is crap…. No one can take a joke anymore….
I don’t know about Mel. He got drunk and said a few things, but we’ve all said those things. We’re all fucking hypocrites. That’s what I think about it. The policeman who arrested him has never used the word nigger or that fucking Jew? I’m being brutally honest here. It’s the hypocrisy of it that drives me crazy. Or maybe I should strike that and say “the N word” and “the F word”….
Mel Gibson is in a town that’s run by Jews and he said the wrong thing because he’s actually bitten the hand that I guess has fed him…. He’s like an outcast, a leper, you know? But some Jewish guy in his office somewhere hasn’t turned and said, ‘That fucking kraut’ or ‘Fuck those Germans,’ whatever it is? We all hide and try to be so politically correct. That’s what gets me. It’s just the sheer hypocrisy of everyone, that we all stand on this thing going, ‘Isn’t that shocking?'”

The proverbial feces hit the fan. As recounted by Wikipedia:

After criticism from the Anti-Defamation League (ADL), Oldman apologised to them in an open letter. ADL director Abraham Foxman acknowledged that Oldman was remorseful, but felt his letter was insufficient and asked for “a little more introspection, a little more understanding and a little more education”. Oldman then made a public apology on the 25 June edition of late-night talk show Jimmy Kimmel Live!, where he stressed that he was “profoundly sorry” for his “insensitive, pernicious and ill-informed” remarks.

What is little known is that in 2008, two years after Mel Gibson’s drunken rant and six years before Oldman’s Playboy interview, a Jewish Los Angeles Times columnist named Joel Stein not only admitted that Jews indeed run Hollywood, he concluded his essay with an in-your-face f-you to America:

“I don’t care if Americans think we’re running the news media, Hollywood, Wall Street or the government. I just care that we get to keep running them.”

Below is Stein’s op-ed, “Who runs Hollywood? C’mon,” in its entirety.

I have never been so upset by a poll in my life. Only 22% of Americans now believe “the movie and television industries are pretty much run by Jews,” down from nearly 50% in 1964. The Anti-Defamation League, which released the poll results last month, sees in these numbers a victory against stereotyping. Actually, it just shows how dumb America has gotten. Jews totally run Hollywood.
How deeply Jewish is Hollywood? When the studio chiefs took out a full-page ad in the Los Angeles Times a few weeks ago to demand that the Screen Actors Guild settle its contract, the open letter was signed by: News Corp. President Peter Chernin (Jewish), Paramount Pictures Chairman Brad Grey (Jewish), Walt Disney Co. Chief Executive Robert Iger (Jewish), Sony Pictures Chairman Michael Lynton (surprise, Dutch Jew), Warner Bros. Chairman Barry Meyer (Jewish), CBS Corp. Chief Executive Leslie Moonves (so Jewish his great uncle was the first prime minister of Israel), MGM Chairman Harry Sloan (Jewish) and NBC Universal Chief Executive Jeff Zucker (mega-Jewish). If either of the Weinstein brothers had signed, this group would have not only the power to shut down all film production but to form a minyan with enough Fiji water on hand to fill a mikvah.
google_ad_client=/”ca-pub-8415620659137418/”;google_ad_slot=/”6929940680/”;google_ad_width=/”649/”;google_ad_height=/”160/”;google_ad_channel=/”8847325881,1000001856,1000000001/”;google_adtest=/”off/”;google_safe=/”high/”;google_hints=/”jews fiji water hollywood/”;google_max_num_ads=/”2/”;google_override_format=true;google_page_url=/”https://articles.latimes.com/2008/dec/19/opinion/oe-stein19/”;/https://pagead2.googlesyndication.com/pagead/show_ads.js/“);document.close();})();” scrolling=”no” width=”649″ height=”160″ frameborder=”0″>
The person they were yelling at in that ad was SAG President Alan Rosenberg (take a guess). The scathing rebuttal to the ad was written by entertainment super-agent Ari Emanuel (Jew with Israeli parents) on the Huffington Post, which is owned by Arianna Huffington (not Jewish and has never worked in Hollywood.)
The Jews are so dominant, I had to scour the trades to come up with six Gentiles in high positions at entertainment companies. When I called them to talk about their incredible advancement, five of them refused to talk to me, apparently out of fear of insulting Jews. The sixth, AMC President Charlie Collier, turned out to be Jewish.
As a proud Jew, I want America to know about our accomplishment. Yes, we control Hollywood. Without us, you’d be flipping between “The 700 Club” and “Davey and Goliath” on TV all day.
So I’ve taken it upon myself to re-convince America that Jews run Hollywood by launching a public relations campaign, because that’s what we do best. I’m weighing several slogans, including: “Hollywood: More Jewish than ever!”; “Hollywood: From the people who brought you the Bible”; and “Hollywood: If you enjoy TV and movies, then you probably like Jews after all.”
I called ADL Chairman Abe Foxman, who was in Santiago, Chile, where, he told me to my dismay, he was not hunting Nazis. He dismissed my whole proposition, saying that the number of people who think Jews run Hollywood is still too high. The ADL poll, he pointed out, showed that 59% of Americans think Hollywood execs “do not share the religious and moral values of most Americans,” and 43% think the entertainment industry is waging an organized campaign to “weaken the influence of religious values in this country.”
That’s a sinister canard, Foxman said. “It means they think Jews meet at Canter’s Deli on Friday mornings to decide what’s best for the Jews.” Foxman’s argument made me rethink: I have to eat at Canter’s more often.
“That’s a very dangerous phrase, ‘Jews control Hollywood.’ What is true is that there are a lot of Jews in Hollywood,” he said. Instead of “control,” Foxman would prefer people say that many executives in the industry “happen to be Jewish,” as in “all eight major film studios are run by men who happen to be Jewish.”
But Foxman said he is proud of the accomplishments of American Jews. “I think Jews are disproportionately represented in the creative industry. They’re disproportionate as lawyers and probably medicine here as well,” he said. He argues that this does not mean that Jews make pro-Jewish movies any more than they do pro-Jewish surgery. Though other countries, I’ve noticed, aren’t so big on circumcision.

I appreciate Foxman’s concerns. And maybe my life spent in a New Jersey-New York/Bay Area-L.A. pro-Semitic cocoon has left me naive. But I don’t care if Americans think we’re running the news media, Hollywood, Wall Street or the government. I just care that we get to keep running them.

46-year-old Stein is now Time magazine’s resident “humorist”.
Tim Graham of Newsbusters alerts us to some of Stein’s pieces over the years:

But when we say jews, we actually mean Khazarian decendants, correct?

It never ceases to amaze me that given their long and turbulent history as a people they have never truly learned they create the conditions of their misery. Which leaves me to wonder if they are geniuses or idiots.

They are not a “race”, genetically. They are not smarter than anyone else. There is a difference between being “smart” and using your exclusive club, free from any moral restraints, to promote your fellow travelers.
Primarily, this is not a religious group. It is entirely political/social. Most are atheists. Even the atheists will be quick to tell you they’re “Jews”.

Hi, long time no see Fellowshippers! I got an email from you all this morning so maybe it’s OK to say hello? Anyway, the whole concept of being a “jew” is not well understood. People from Judea were nicknamed this way when they were in captivity in Babylon I think, and afterwards it just stuck on a lot of people who thought it would be cool to be called by that name. But most of them weren’t from Judea anyway. It has been geo politicized and is used in many different ways and has served to cover up the motives… Read more »

Reblogged this on My Blog.

If you read the news pieces Henry Ford wrote about jews you’d get a history in how they moved to control media, starting in vaudeville acts and theaters.
https://en.wikisource.org/wiki/The_International_Jew
Along with that goes this treatise upon the subject;
https://archive.org/stream/TheSecretWorldGovernmentOrHiddenHand/13065735-The-Secret-World-Government-or-The-Hidden-Hand-The-Unrevealed-in-History-Paperback_djvu.txt
Please keep in mind not every jew is involved, far more goy are involved than jews, but jews are at the top and take the blame. I’d much rather people call these folks, jew and goy alike, satanists, because that is who they serve when they do evil.

All true information. The rabbit hole is quite deep.

UNHOLY PERVERTS Cases of Rabbi Abuse Case of Shlomo Aviner (Rosh Yeshiva, Ateret Cohanim Yeshiva, Rabbi of Beit El, Israel) Case of Rabbi Lewis Brenner (Convicted of child molestation. The original charges included 14 counts of sodomy, sexual abuse and endangering the welfare of a child. He agreed to plead guilty to one count of sodomy in the third degree, a Class E felony, in exchange for a sentence of five years’ probation.) Case of Rabbi Ephraim Bryks (Accusations about sexual inappropriate behavior with children started surfacing in the 1980’s. Rabbi Bryks is currently a member of the Vaad Harabonim… Read more »

REMEMBER! Remember that is just the tip of the kosher iceberg! The argument in the Gospels between Jesus and the Pharisees/rabbis, is between TORAH believers and Oral Tradition/Talmud believers (Matthew 15:1-20; Matthew 23:1-39; John 8:43-47). Without a knowledge of the Babylonian Talmud, you cannot understand why Jesus is condemning these Babylonian Talmudic Jews: Pharisaism became Talmudism, Talmudism became Medieval Rabbinism, and Medieval Rabbinism be came Modern Rabbinism. But throughout these changes of name, inevitable adaptation of custom, and adjustment of Law, the spirit of the ancient Pharisee survives unaltered. When the Jew reads his prayers, he is reciting formulae prepared… Read more »

TORAH/TALMUD The Talmud is Judaism’s holiest book (actually a collection of books). Its authority takes precedence over the JEWISH Bible in Judaism. Evidence of this may be found in the Talmud itself, Erubin 21b (Soncino edition): "My son, be more careful in the observance of the words of the Scribes than in the words of the Torah (JEWISH Bible)." Jewish scholar Hyam Maccoby, in Judaism on Trial, quotes Rabbi Yehiel ben Joseph: "Further, without the Talmud, we would not be able to understand passages in the Bible...God has handed this authority to the sages and tradition is a necessity as… Read more »

European Jewish Congress: Bible should contain warnings about antisemitic passages; governments must fund fight against antisemitism - Fellowship Of The Minds 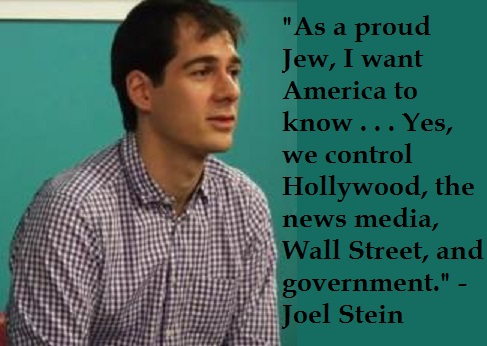 You can actually trace this back to before the first diaspora. The Pharisees made their bid to seize control of Yahweh worship by writing the oral traditions down with certain, careful edits. In total, beginning with Deuteronomy, the idea was to create and enhance the priestly temple cult. Once Persian King Cyrus used his army to reinstate them in Palestine they immediately set about creating this political regime. It continued, largely as it began, until Christianity created a hiccup. The Talmud is their answer to that hiccup. It is conceived and directed toward the destruction of Christianity. In a universe… Read more »