You own this sanctuary-loving demorats.
From Fox News: A man accused of an “unprovoked and brutal stabbing” at a market in California last month is an illegal immigrant alien with a criminal record who had been previously deported seven times, a U.S. Immigration and Customs Enforcement spokesman told Fox News.
Ricardo Velasquez-Romero, 39, who also goes by the name Eulalio Miniz Orozco, was arrested last month after local police say he stabbed a 61-year-old man in the neck at Lola’s Market in Santa Rosa on Dec. 21.
Department of Homeland Security databases indicate Velasquez-Romero “has been repatriated to his native Mexico seven times since 2007,” a spokesman for ICE said.
“Records indicate Mr. Velasquez also has multiple prior criminal convictions, including those from felony drug and weapons charges,” said James Schwab, a spokesman in San Francisco for ICE.
Schwab said ICE has placed a detainer on the suspect with the Sonoma County Jail, indicating a desire to take custody of him when released from local custody, and “continues to closely monitor the legal proceedings of Mr. Velasquez.”
At the time of the stabbing, Santa Rosa Police said the victim and the suspect had been sitting at different tables in the restaurant and had not spoken to each other.
“At one point, the suspect stood up and walked toward the victim,” the local police said a news release. “The suspect had an unknown stabbing instrument in his hand and stabbed the victim once in the neck. The suspect then fled the area on foot.”
Velasquez-Romero had been residing in Santa Rosa for the previous two months, police said.
The victim, whose name was not released, was transported to a local hospital with a life-threatening injury. At the time of Velasquez-Romero’s arrest last month, the police said the victim’s condition had been upgraded to stable.
Velasquez-Romero has been charged with attempted murder.
It follows the case of Kate Steinle, who was shot to death in San Francisco in 2015 by an illegal immigrant alien named Jose Ines Garcia Zarate. The case fueled a nationwide debate on sanctuary cities. Zarate, who had previously been deported several times, argued the shooting was an accident and was acquitted of murder last month.
California recently became a “sanctuary state,” where local police are prevented from asking people about their immigration status.
DCG
Please follow and like us:

Deported 7 times and he keeps coming back? Hang this cockroach and all the others

Sure makes you wonder if a US citizen committed that many crimes would we be given so many chances? This country is turning upside down.

In the first place once he was sent back, he should have not re-entered under any circumstances. Because his violent past and now charged with attempted murder, he should be sent to a mental facility and subjected to strong “medication” to suppress his impulses -nut houses are a cure all, and maybe in a short time there won’t be a need to return him to his place of origin, I’m sure nobody is going to miss his absence.

Gee, it looks like he didn’t even have time to get a face tattoo.

Alma, I refuse any kind of tax dollars for any kind of care. He deserves the bullet which puts an end to his re-entry. He hates Americans, remember?

Alma . . . . how about when he is at the nut-house, they perform a lobotomy on this joker, one that will leave him as docile as little lamb. Then we Para shoot him someplace over the Mexican desert and let him find his way home (if he is able.)

I meant a strong medication that will put him and US OUT OF MISERY, comprende?

Alma, I understand what you said. I firmly believe traitors should get death publicly as example to others who may want to try what they did. If a den should get back in power, they will be let loose. What they did for years were crimes against humanity. God Himself used the death penalty and He will use it in the final days. God warned not to have mercy on evil enemies, book of Isaiah.

If he pulled that with me you’d be reading about how they took him away with a hole in his forehead.

Wish I could help!!!

7 friggin times. who’s stupid here. he gets back across the border before the guys that dropped him off can finish the paperwork and get back home. Me thinks STRONGER measures are in order.

Maybe they could get him a “My Little Pony” face tattoo before they dropped him off.

My Goodness-tenacious fellow,isn’t he? (sarc) I know there are LOTS of illegals who either stay here,keep a low-profine and work hard or who get caught,deported and call it a day,but we sure hear about a LOT about the habitual offenders. I STILL think every one who’s deported should get a chip in the scrote, (or a relatively correspondent place on the females) and have someone watching the Border on their computer for chips. If they see a chip crossing anywhere except the Port Of Entry,call in the snipers and drop ’em where they stand. How ELSE can we make ’em… Read more »

That’s a GREAT idea. Nobody talks about Mexico’s responsibility in this. In addition, the entire time Obongo was on the golf course on our dime he was wheeling and dealing to get illegals from Central America to join the Mexicans. They make no effort to stop them or to do anything to help the situation. They are signatories to NAFTA. They are cleaning up in Mexico off of NAFTA. They ship their problem children here and laugh at us. Any of them would rather do time in a U.S. prison than a Mexican one. At least they FEED you here.

truck . . . . . that is truly an innovative way of dealing with these repeat offenders. Once someone has S-E-V-E-N times committed the felony of breaking our boarder . . . then it really is time to take off the gloves.

yeah the demonrats and all those who are so dumbed down via the educational, entertainment, media, indoctrination, somehow still fail to see the consequences of their idiocy

I believe it. It is just hard to understand when somebody’s mistaken ideology causes them to embrace something so destructive. You see these young suburban girls dating thugs all the time. They get beaten, catch STD’s, get killed, involved in crimes, etc., yet they think everyone else is wrong because they’re “racist”.
They see these Mexican gang members who hate their guts and reach out to them with open arms. We just saw an example of that recently with the young woman that was killed. They have more sympathy for the illegal than the victim.

They do have more sympathy for the perps…I did a blog post about a woman in Sweden maybe (?) who was killed by a Muslim migrant. The family raised funds for migrants at her funeral.
I can’t find the post right now yet remember the insanity of it.

That’s “Meet the Fockers” stupid. It’s people like that that end up getting beat to death and feeling good about it because they think their death contributed to “something”. 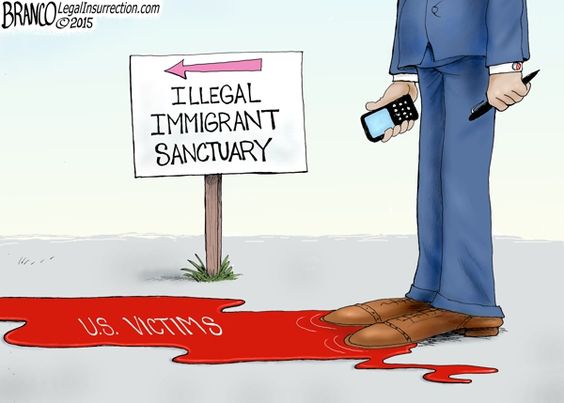 Pretty clear that the only “sanctuary” in Mexifornia is afforded the illegals…including the criminal and violent illegals in the state. The legal citizenry have no “sanctuary” and count for SQUAT to the “elected” officals locally and federally. We are paying the highest taxes in the USA for our own “throats to be slit”……our schools to be compromised by illegal, non-English-speaking kids who require 12 years of “ESL” (English as a Second Language) funding/education and largely STILL do not speak English….and sometimes, sadly, for our kids, our neighbors, ourselves to pay with our lives to the criminal elements within these illegally-unConstitutionally-protected… Read more »

Seeing the writing on the wall (pun intended!), California farmers reportedly are turning to robotics for labor.

I thought Cro-Magnon Man was extinct!
Poverty IS NOT the “parent of crime”: TOLERANCE of crime is the “parent of crime.” So Schmuckles Schumer the Clown wants DACA for Dreamers, does he? This Velasquez-Romero dreams only of stabbing people in the neck!
I dream of a Washington without the likes of Schumer, Pelosi, Wasserman-Schultz, Feinstein, Boxer and a whole host of other senators and representatives who hold dual citizenship. And I dream of a Congress that has not been bought out or blackmailed by Israel, too!