Update: Full FISA Memo released!!!
The New York Post reports that today, Republicans on the House Intelligence Committee voted to release the controversial FISA memo that has been described as so “shocking” and “explosive,” not only will officials in the U.S. intelligence “community” be fired, people will even go to jail.
News of the FISA memo spawned a social media campaign with the hashtag #ReleaseTheMemo.
Reportedly, the FISA memo says the Obama Administration’s FBI and Justice Department, using the bogus claim of Russian collusion, misused the Foreign Intelligence Surveillance Act (FISA) to gain the Foreign Intelligence Surveillance Court’s approval to conduct surveillance on then-candidate Donald Trump and his team.
The 99-page document, United States Foreign Intelligence Surveillance Court Memorandum Opinion and Order, that is said to be the background source of the FISA memo also details how the Obama Administration’s National Security Agency (NSA) conducted illegal surveillance and doxxing of American citizens.
The vote to release the memo comes after committee Republicans, led by chairman Rep. Devin Nunes (R-CA) pushed for its disclosure.

Rep. Adam Schiff (D-CA), a member of the House Intelligence Committee who opposes the release of the memo because the American people can’t understand it, said he and other Democrats on the committee voted against releasing the memo.
President Trump has urged that the FISA memo be released.
Not coincidentally, FBI Deputy Director Andrew McCabe, rumored to be named in the FISA memo, stepped down today, reportedly “under pressure from Director Christopher Wray”.
McCabe’s wife accepted cash, rumored to total $700,000, from a Super PAC connected to Terry McAuliffe, a longtime ally of the Clintons. McCabe will remain on the payroll using accrued time off until mid- March, when he maxes out his pension benefits. (New York Post)
See:

Reblogged this on Arlin Report.

Trump really should read the “FISA memo” during the State of the Union address to get the details out to the masses.

greenworxx . . . . Now that would be a pretty good idea. Except that there are certain dillweeds that have advised the American people that they will not be in attendance. . . two for instance are that goofy cowboy hat wearing woman from Florida (I believe,) and of course Earl Blumenauer–Oregon’s commie representative, in addition to one or two others. I would love to see the look on each of their faces when the contents of this memo is revealed to them! Of course, no one will miss them, since they are rather useless in the first place,… Read more »

Why should THAT be a problem? They’d only sleep through it if they were there anyway.

Conservative commentators, mostly betas themselves, generally give creeps like Earl credit for having good intentions while chasing impossibly utopian fantasies, while the reality, as Joseph Conrad at least saw, was that this sort of fake utopian no more gives a damn about the poor than Soros does. How is it not as obvious as the weakness tattooed on this latte cyclist’s face that his sort of progressivist leveling doesn’t mean uplifting the poor, etc, but rather enchaining his betters? Will Americans have to learn as the Russians did in the last century that these “coercive utopians” are, if anything, cowards… Read more »

Congratulations to us the American people; we the schmucks who get to pay the bills finally get to see what our tax dollars have paid for. It chaps my hide to think that we were paying salaries to all these miscreants, and they are colluding with one another to fing-dingle We the peons by trying to subvert the rule of law in this land. I sent off a terse (to say the lease) email to Adam Schiff. Of course he was on tv news saying, “blah, blah, blah, the sky is going to fall because the American people are going… Read more »

This is good news. This has been known for a long time but denied. Now they have to address it. There should be indictments.

This Court Jester, Rep. Adam Schiff (D-CA), rightly deserves to be known as a Sciffhead for his outrageous remarks in re the intelligence of we, the hoi polloi. at least we smart enough to know not to run and be subject to the public spotlight he now laments. However, insofar as ‘people will even go to jail.’ goes, I’m not holding my breath on, as it’s a forecast that no matter how many times published never came to past in my lifetime [75 yrs] except for a handful of people doing Nixon’s shenanigans over Watergate. Even then the most vile… Read more » Just a nod in your direction, Joseph. 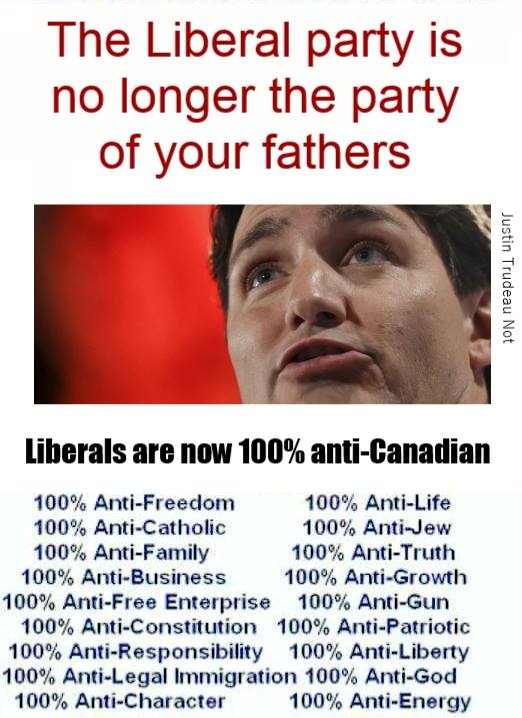 Good on you, lophatt, for nailing our Idiot-in-Chief, Justin Time Trudeau, the scum-sucking windbag pumped up by the Red Machine ‘justin time’ to save their raggedy sorry-asses! He is a ‘simple’ as we Quakers say, from the unfortunate moment he was seduced to think he was man enough to be Prime Minister. Lord, forgive us our sins! As bad as his father was –I can never forgive him for stabbing the Bank of Canada in the back by selling out to the Big Five Banks [to get financial support, so Pierre Elliot Trudeau could run as a Liberal after defecting… Read more » 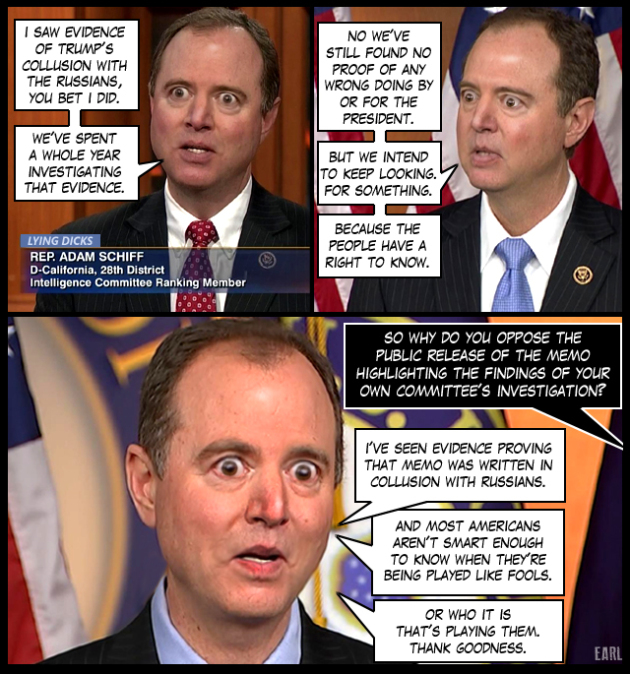 I like the name you give this fool… “Court jester” fits Schiff perfectly!?

Yes, and we also get to pay the retirement for filthy Andrew McCabe. If only they’d fired him a few weeks earlier. I’m so over our tax dollars going to this nightmarish mess from the DOJ and FBI, and tell me, just where the hell is Sessions? Where the hell is Wray? And why isn’t our Prez firing these bozos? 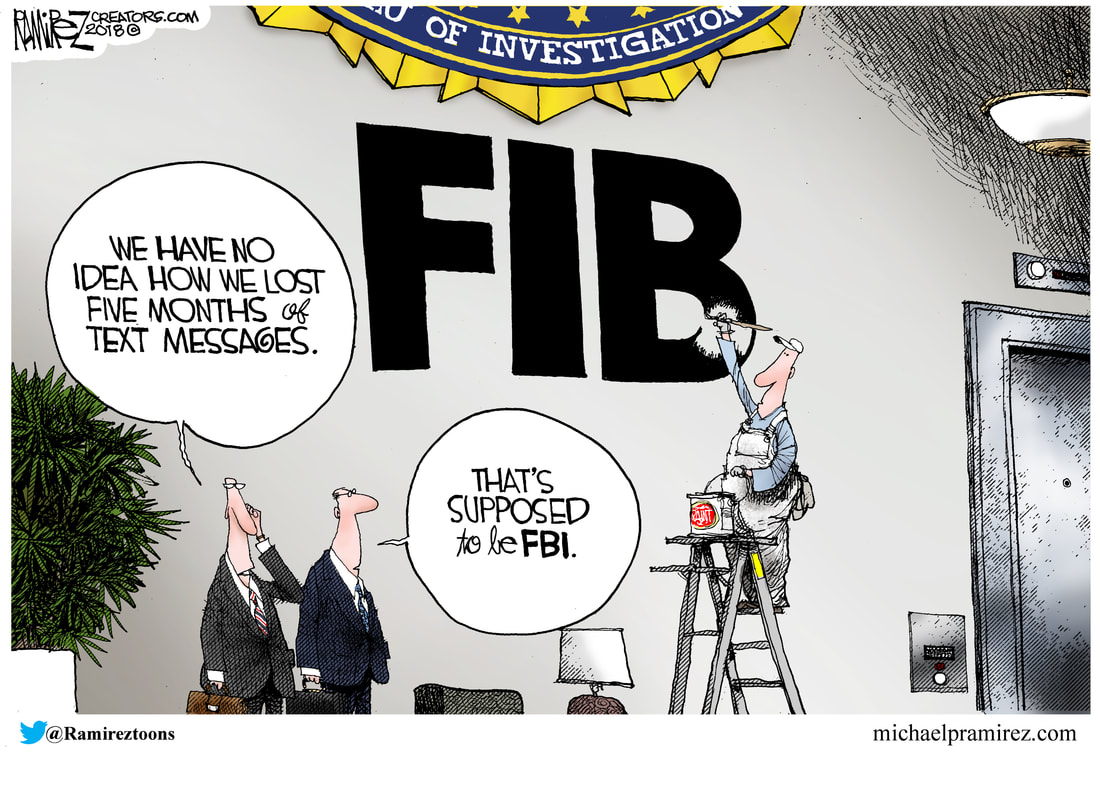 I only hope to live long enough to see the total annahilation of the political “weaponization” of the FBI,, IRS, DOJ, and hell…..probably even other minor players such as the EPA……who were “armed” against common Americans and their elective/representative voice// processes by OBAMA,

FIRING ’em is NOT enough-they should be arrested and prosecuted. There’s PLENTY to nail ’em on.

Sessions is a goner, takes time though.

Why? If it were up to me he’d have been gone a year ago. In fact, he wouldn’t be there at all.

Jill is smart. Arknacide is permanent.
Many, many roads lead to the Clintons.
Especially if your name is Vince.

I think Schiff is protesting way too much. And for no democrat to vote to expose the memo is a career killer. They have much to hide. There are some nervous Nellies out there. I expect many to start dropping. As for Sessions, he was such a bulldog in his home state and a straight arrow guy, I have to wonder if he is working something big behind the scenes and playing it very close to the belly. In time. We shall see. A whole lot of indictments have been issued, who worked those? Maybe he is letting the Mueller… Read more »

Glenn, I believe what you said about Jeff Sessions. President Trump chose him, and he already knew a lot about what he was up against. With all that has been going on in the last year, I don’t see President Trump allowing him to do nothing without him being fired. Christopher Wray was also hand picked, so I feel the same way about him. Someone has certainly been working, as there are now 13,605 sealed indictments out there, according to “Stormwatcher” on Twitter. He has been keeping up with this since around the end of October. https://drive.google.com/drive/mobile/folders/1KPh2ASFggwF1XVnVpDB3mtwvwlH71om6 If Mr. Sessions… Read more »

Sessions is part of what is now laughingly called “The Deep State”. That is treasonous scum by a more correct name. I have said before, and I’ll say it again, if Trump is serious he has to be smart enough to know that you cannot allow these weasels to continue in power if you want to accomplish something worthwhile. Sessions has been gate-keeping. The crooks he’s protecting feel comfortable as long as he’s there to run interference for them. We know enough about the Clintons and Obongo to put the whole sewer away for life. Nothing is being done about… Read more » 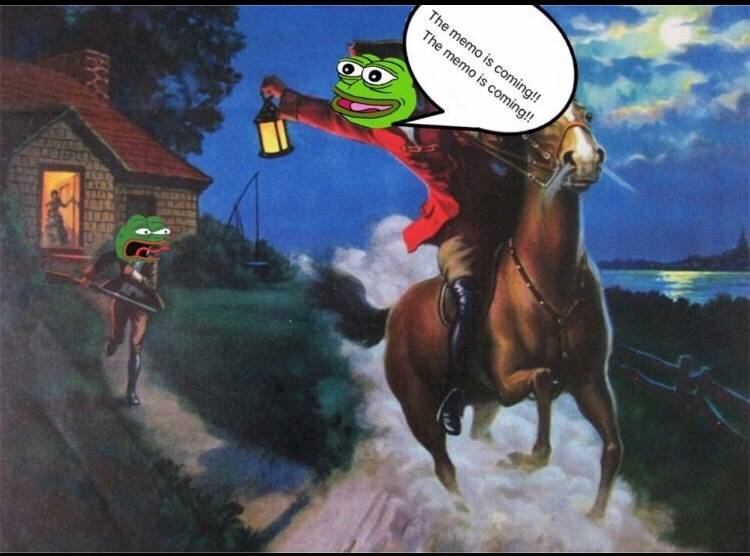 Grab your popcorn– Democrats will be hysterical…

Still remains the possibility that the report will be so heavily redacted that we may not understand it….. Well, of course we all understand well enough, and have for a long time. Any how, just curious that mccabe’s major concern seems to be his ‘pension’.

The script says that this is important “new” information. It isn’t We’ve know about these things for a long time. Once its released the “slow roll” will begin. They will try to take YEARS to bring indictments. Ultimately, nothing will happen and it will turn into a giant puffball.

I agree, lophatt. it’s most likely too, too true that it will be made to fade away, the same as a true & substantial investigation of 9-11. All we were given were distractions and disinformation.

Reblogged this on kommonsentsjane and commented: Reblogged on kommonsentsjane/blogkommonsents. It is sad that you have the Democrats in such a stupor that they can’t even think straight. This has been going on for over a year – since the election. We have a duly elected President Trump and just the fact they do not like him personally they feel they can impeach him for “NOTHING.” Following is why they are in such a muddle: The impeachment push, Nadler said in 1998, amounted to a “coup d’état,” a mangling of a misunderstood constitutional power. “The purpose of the impeachment provision was… Read more »

The Democraps are doing what the Republithugs are doing, reading their lines. They don’t work for us. Never have. Their primary purpose is to convince as many as possible that they have a functional government. They don’t.
If tomorrow their bosses (the Repug”s bosses too) give them orders and a new script they’d be slobbering all over Trump.. Don’t give them the satisfaction of knowing they’ve snookered you. 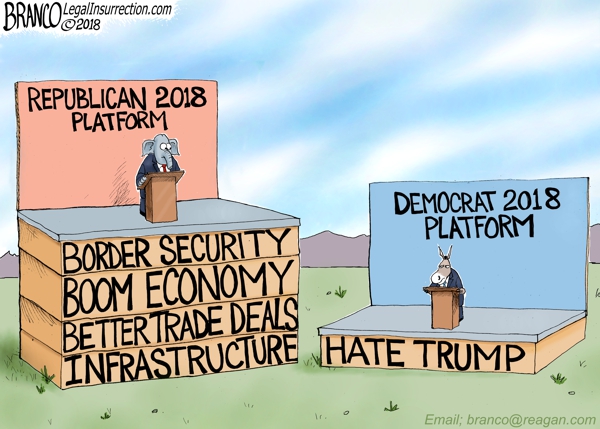 In case you haven’t seen this, its worth a look:
https://www.citizenfreepress.com/column-1/hilarious-nancy-pelosi-visibly-shaken-by-fisa-memo-turns-on-chris-cuomo/

This is more of what Pelosi is famous for. She’s saying “it isn’t the American people’s right to know what’s going on. That’s THEIR job (Congress, ha!). When are we going to see the backside of these creeps?

Trump will release the memo after his SOTU speech.

Immediately after, one hopes. During both D rebuttals (and why pray tell are they having two?)

Was there even a GOP response?
It all went off the air here after the silly little Kennedy boy did his talk about what he’d apparently thought the SOTUA would be about (before actually hearing it…) — even the leftist pundits on PBS were harsh on him, lol.

You’re talking about “Drooling-Joe Kennedy”. He wets his papers before he wets himself.

Note that Wall Street has created a “micro-crash” just before SOTU.
Coincidence? I think not.
https://www.zerohedge.com/news/2018-01-30/bonds-bloodbath-stocks-slammed-bitcoin-battered-vix-goes-vertical
If we had a functional SEC, they would look at who manipulated the markets today.
Quite the diversion.
In other matters, Trump should have a Representative read “the Memo” immediately after SOTU and during both D rebuttals 😉

Quick! Get those ankle-bracelets/orthopedic-boots on him!

Maryaha, I doubt very much he’s going to skip town, he’s under watch like the rest of them and if he does leave, he will be found and brought to justice because is not what has actually happened but what was done before.

Here’s a representative sample of “The 25%”:
https://www.americanthinker.com/blog/2018/01/to_protect_illegals_from_deportation_denver_decriminalizes_pooping_on_the_pavement.html

Besides Hillary being Hillary, note that their new Poobah is a dyke. Wow ladies, look how far you’ve come!
https://investmentwatchblog.com/hillarys-campaign-manager-gives-disgusting-reason-hillary-blocked-her-from-firing-campaign-faith-advisor-after-credible-sexual-harassment-claim/