Mail.com: Sears Holdings Corp. plans to close between 100 and 120 Sears and Kmart stores to raise cash after a weak holiday shopping season for the retailer.
The closings fueled speculation about whether the 125-year-old retailer can turn itself around. The closings are the latest and most visible in a long series of moves to try to fix a company that has struggled with falling sales and shabby stores as rivals like Wal-Mart Stores Inc. and Target Corp. spruced up their looks and turned into one-stop shopping sources.
Absolutely Pathetic (AP) goes into spin mode:  “There’s no reason to go to Sears,” said New York-based independent retail analyst Brian Sozzi, “It offers a depressing shopping experience and uncompetitive prices.” Billionaire investor Edward Lampert purchased Kmart out of bankruptcy in 2003 and bought Sears, Roebuck & Co. a year later. Since 2004 Sears Holdings — which operates both Kmart and Sears stores — has watched its cash and short-term investments go from about $2.09 billion for the year ended Jan. 31, 2004 to $1.34 billion for the year ended Jan. 31, 2011, according to FactSet. The figure now stands at about $700 million.
That company disputes talk that it is in trouble financially or will have problems surviving. Spokesman Chris Brathwaite says Sears Holdings has more than $3.5 billion of liquidity, consisting of $700 million in cash and $2.9 billion available under its credit lines.
Still, Sears Holdings said its declining sales, ongoing pressure on profit margins and rising expenses pulled its adjusted earnings lower. The company predicts fourth-quarter adjusted earnings will be less than half the $933 million it reported for the same quarter last year.
At least some experts recognize the true problem:  Some industry experts say part of the problem Sears is facing is that economic difficulties continue to grip its core customers. These middle-income shoppers have seen their wages fail to keep up with higher costs for household basics like food.
AP spins again:  But the bigger issue, analysts say, is that Sears hasn’t invested in remodeling, leaving its stores uninviting. Preschool teacher Sara Kriz concurred. Picking up conditioner at a Kmart in Manhattan on Tuesday, Kriz said she shops at Kmart “only when I have to,” which amounts to once every few months. Yet she goes to Wal-Mart or Target nearly every week because, she said, they are cleaner and better stocked.
I’ve been to all the stores mentioned in this article.  Walmart and Target are cleaner stores? Please, they all have their issues.  I’ve never been in a Sears and thought, wow, this store isn’t clean.
Can anyone blame the lackluster sales on the stores’ appearances?  Sure.  But let’s talk about the economy.  This Christmas, my friends and family, we chose not to exchange gifts (kids excluded).  We all are feeling the pinch.  Yet Americans shopped like there’s no tomorrow on Black Friday.  Though they probably charged the majority to credit cards.
Real unemployment is at 11%, and existing home sales climbed recently yet although rebenchmarking resulted in lower adjustments to several years of home sales data, the month-to-month characterization of market conditions did not change.
And Obamacare will impose new compliance regulations, employer mandate taxes, taxes on business “flow-through” and investment income, and numerous indirect costs on small- and medium-size companies.
We have over $15 trillion in debt and Skippy wants to ask for a debt limit hike.
How can any business be thriving under this administration’s policies?  Until this administration is done, I’m going to bet you’ll see more stores and businesses closing.
DCG

We used to have a huge stand-alone Sears store here in Atlanta that was also their distribution center here. I loved going there as a kid, because you could find just about anything you were looking for. 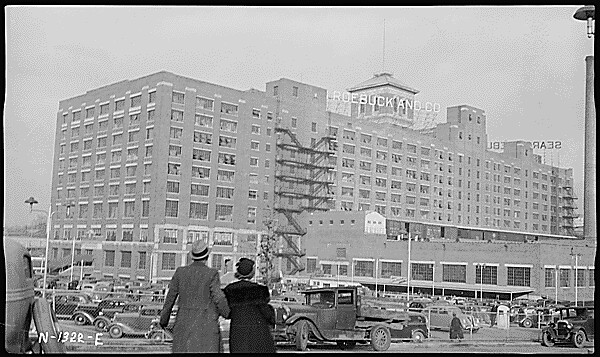 If we want to stop the bleeding then we have to erect a firewall between the commercial banks and the investment banks. This means reinstating the Glass Steagall standard, this time globally. The Bank of England made a resolution to do just this, to stop a crisis like 2007 happening again, and it’s due to go into operation in 2019. 2019????????????????????? We need to HR 1489 to be passed today, tomorrow, or Friday at the very latest. THE RETURN TO PRUDENT BANKING ACT introduced by Marcy Kaptur D Ohio. You can check this out and see how many people have… Read more »

………..opening up US Steel Industrial and Tool making plants and Concrete Manufacturing companies, etc etc. We need to get people working again in meaningful employment, taking part in projects that will take one or two generations to complete, that is why we need a Credit System, with that Credit uttered by our own Congress, with the collateral based on the value of the enterprises financed, the degree of improvement they will make to the human economy, per head per sq kilometer, not the virtual economy, which only happens in cyberspace. The reason there is such a panic going on is… Read more »

My neighbor just received a sales ad in the mail from Sears, urging her to buy clothes from their “Kardashian Collection.” And they wonder why nobody shops in their stores anymore.
It would be so easy for them to regain their former place as a trusted brand name, but they just can’t get out of their own way.