But that’s exactly what a major Hollywood actor named Fred Willard did.

TMZ reports that Fred Willard, variously said to be 78 or 72 years old, was arrested for lewd conduct on the night of July 18, 2012. LAPD undercover police allegedly caught him with his pants down and hand holding his exposed penis in the sordid filthy Tiki adult movie theater in Hollwood. 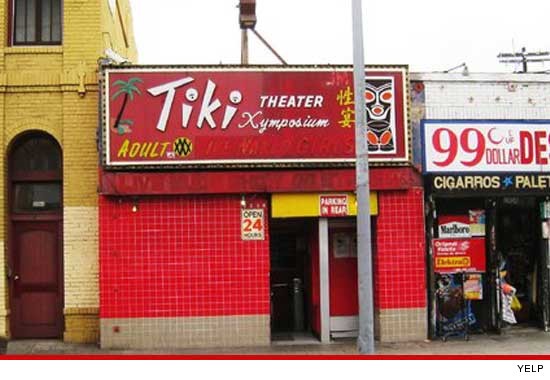 After his arrest, Willard was quickly released to appear at a later court date.
Willard is best known for his roles in “Best in Show”, “For Your Consideration”, “American Wedding” and “Everybody Loves Raymond.” As for which movie he was watching — there are 3 flicks in rotation at the theater: “Follow Me 2,” an XXX parody of “The Client List,” and “Step Dad No. 2.”
When adult movie theaters get their license, they have to allow cops in whenever they want, to inspect the premises. In fact, the Tiki Theater has a sign posted in the front which warns customers that the theater is “viewed by LAPD.”
Willard has been married to his wife, Mary, since 1972. The couple have no children. Willard’s lawyer, Paul Takakjian, said in a statement to ABCNews.com, “With all due respect to the individual officer, our belief is that Fred did nothing in any violation of any law. We will be working vigorously to clear his name in this matter”. The following day PBS announced that Willard had been fired as host of Market Warriors. [Source: Wikipedia]
~Eowyn

He’s married? She must be his beard…

GROSS!! I don’t know why some men can’t get it through their thick skulls, when you get past a certain age, some of your parts just don’t work any more. Just put it down and walk away. Be grateful your lungs are still working. That’s enough. Stop being an old fool.

Invented by a man, I’m sure! Hormones go away! It’s nature! Accept! Oh well, if they accepted, it would destroy a whole industry, I guess…sigh.

We watched Raymond too joandarc. The other edge to that Willard role was that the show’s writers were actually poking fun at the straight laced father. To be sure, Amy’s parents were prudish to a fault but there was method to that. I feel certain that they were trying to portray anyone with a straight, moral lifestyle as being prudish to a fault. Yes, I think that even the best, most beloved shows on TV are at times compromised for the (not so) hidden agenda.

What’s wrong with men? I just don’t get it!

Wow, I know Fred Willard. 1989-90 on the set of DC Follies I was a set assistant and glorified gopher while I went to UCLA. Very down-to-earth, funny, level-headed guy. Never acted like we were peons. Wow.

Thanks for adding your personal experience SDF. This shows there is potential for good, bad and simply embarrassing behavior in all of us.

Not surprised at this behavior considering he’s a product and promoter of Illuminati garbage. TV shows such as “Modern Family” etc advocating bizarre “lifestyle” choices as “normal”- this abnormal behavior is typical of the very abnormally immoral illuminati satanists.

Sadly, I have to agree with that free. It’s frightening at times.

Ironic how he portrayed a devout Christian on “Everybody Loves Raymond”

Very strange. Why would a seemingly successful man risk his image doing such a rude and gutter-like thing? This is one more example of how no matter what one’s station or accomplishments, we are all just human and subject to various degrees of temptation. This however has me shaking my head as do many things I see in the media. Someone earlier mentioned the Illuminati and I do think there’s something to that. This incident will do little to this man but to society on the whole, it brings us down. It’s demoralizing in every sense of the word. And… Read more »