Hillary’s problems with walking and standing actually date back 7 years, to at least 2009.
Edmund Kozak reports for PoliZette, Oct. 18, 2016, that emails obtained by Citizens United through a Freedom of Information Act (FOIA) request and released on Tuesday indicate that walking around a stage and speaking without a podium to hold onto may have been a problem for Hillary Clinton as early as 2009.

Note: Citizens United is a conservative 501(c)(4) non-profit organization chaired by David Bossie, who is also the deputy campaign manager of the Donald Trump presidential campaign.

In a Sept. 14, 2009 email to Amitabh Desai and Ed Hughes, employees of the Clinton Foundation’s Clinton Global Initiative, Hillary’s top aide and rumored lesbian lover Huma Abedin revealed that Hillary could not walk around the stage like her husband Bill and would need a podium for an upcoming address:

“Just want to make sure someone has coordinated with you on hrc [Hillary Rodham Clinton] speech set up. She won’t be able to give it in the round like he [Bill Clinton] does walking around with microphone. Are we able to set it up so shes speaking at a podium?”

“I’m worried that will be an issue for her. Can we do a half round or something?”

The email exchange suggests that as early as 7 years ago, Hillary already had trouble walking around on a stage, and with speaking without a podium or  surrounded by an audience.
Hillary’s need for a podium is also revealed in a more recent email from Huma Abedin to Dan Schwerin, which was released by Wikileaks.
In that email on October 22, 2015, Abedin asked Hillary’s speechwriter, Dan Schwerin, to cut the 2-minute long speech he had drafted for Hillary by half because Hillary would face “a bank of Mics [microphones] and no podium.” Here’s a screenshot of the email exchange:

As explained by Breitbart.com, Dan Schwerin, Director of Speechwriting for Clinton’s campaign, had sent Abedin a draft of a “post-game statement” Hillary could make to the press after her testimony before the House Benghazi Committee in October 2015. Schwerin had drafted a 253-word statement, which would take the average speaker less than two minutes to deliver. But Abedin still asked Schwerin to shorten the speech by half because Hillary would not have a podium.
All of which suggests that Hillary Clinton, who means to be POTUS — a very stressful job that visibly aged every president — does not have the stamina to stand without the help of leaning on a podium for even two minutes.
Meanwhile, another email recently released by WikiLeaks indicates that Hillary’s van is equipped with a bed. The April 14, 2015 email from T. Brody is a forward of a National Review article describing Hillary’s vehicle as a Secret Service-owned and -operated luxury 2014 Chevrolet Express van, outfitted with heated leather seats and a sofa that converts into a bed. (H/t Gateway Pundit)
Hillary’s van actually has more than a bed. According to an investigation by National Enquirer, “insiders” say the van is more like an ambulance, equipped with:

“Sources” also told the Enquirer that Hillary has a personal Emergency Medical Services team — a squad of local ambulance workers in bulletproof vests who follow Hillary at her appearances.
My joke post, “Hillary Clinton uses an ambulance van,” on Aug. 29, 2016, turns out to be true. 😀

The only people sicker than Hillary are her supporters. Pity all of the Afterberniers who jumped on her boat, the emails have shown what a slick backstabber she was to her party comrade. Very clever, very evil, and very magnetic to her fellow sickos.

With overwhelming evidence, is there one person out there that isn’t convinced she is not healthy enough to serve?
I have said all along, they will drag her across the finish line and someone behind the scenes will jerk the chains.

I wondered- how come she looked so ‘good’ at the last debate… Walking around; strong voice; no apparent mind wanderings… Was she on drugs? What happened to the lady who needed ppl to hold her up– who had to get shoved into the vehicle on 9/11?? ?

I read where a medical expert suspects she disappears for days before a debate to detox, then they give her drugs right before the debate and they last longer and work better.
I thought her gait tonight was jerky on stage and someone stayed close to her afterwards.

unfortunatly the people that need to see this stuff the most will never read it. and if they do they’ll never believe it. we all need to take a different approach to converting liberal fools to responsable conservative thinkers. a daunting task indeed. conservatives need to approach liberals in such a was as to lead them to the truth and to believe that is was their own genius and ideas that lead them there. I’m not sure how to do it myself, but putting up a solid wall will never work. an unstoppable force encountering an immovable object as it… Read more »

youknowwho, In the nearly 7 years of FOTM, we’ve encountered many leftists. For the first 1-3 years, depending on the commenter, I was polite and tried to engage the ones who were at least civil, hoping that the FACTS presented in our posts would eventually change their political beliefs and worldview. Not a single one did. Instead, eventually even the civil ones turned nasty, which was when I banned their comments from being published. DCG can attest to this. I’ve had the same experience with liberals I personally know, one of whom is an intelligent attorney, who apparently only reads… Read more »

Yep, those tolerant liberals just can’t help themselves. You try to engage and eventually, with facts ignored, they resort to name calling. “…someone that cares about their welfare, someone that wants to help them. It’s what they understand.” Not when you come from different perspectives of “help.” Liberals (in general) want government to help them: free healthcare, free college, more benefits, rulings to help LGBT tell folks how to run their businesses, etc. Liberals want you to help by spreading the wealth and taxing the rich to death to pay their fair share. You shall be punished for only thinking… Read more »

America has a choice… an easy one:

Speaking of Hillary “Make America Garbage,” get this… how disgusting; can’t even stop at a proper dumping station. What a LOW Class of people!
https://twitter.com/ABCPolitics/status/788739066829430784
“The Clintons: Dumping Sewage Across America for 40 years!” Hillary winning this post-debate poll, ugh. It is still open as it let me vote a few minutes ago.
https://polldaddy.com/poll/9556452/

Very revealing insider comments/emails in your post re HRC’s now-7-years-long health problems. The contents of her “vanbulance” is like a MASH tent on wheels. I suppose she wore white/offwhite tonight to look more “pure” & “honest.” Or maybe that’s her “hospital robe” outfit, in case of emergency. Twitterverse opinions, post-3rd-debate: –“For someone who constantly could barely remember her name before the FBI, Hillary seems to possess a good memory.” (@mitchellvii) Replies to that: –“She forgot about the $6 Billion lost at DS and Creamer admitting Hillary plants caused Chicago riot.” –“She forgot her husband’s vice president @algore contesting an election.”… Read more »

Great article but the comments under it are garbage.
10/19/16: “SUNY professor says Trump win at least 87 percent certain; other polls ‘bunk'”:
https://www.syracuse.com/politics/index.ssf/2016/10/helmut_norpoth_donald_trump_victory.html

Some of Hillary’s crooks…

And this one exposed by the Project Veritas videos: 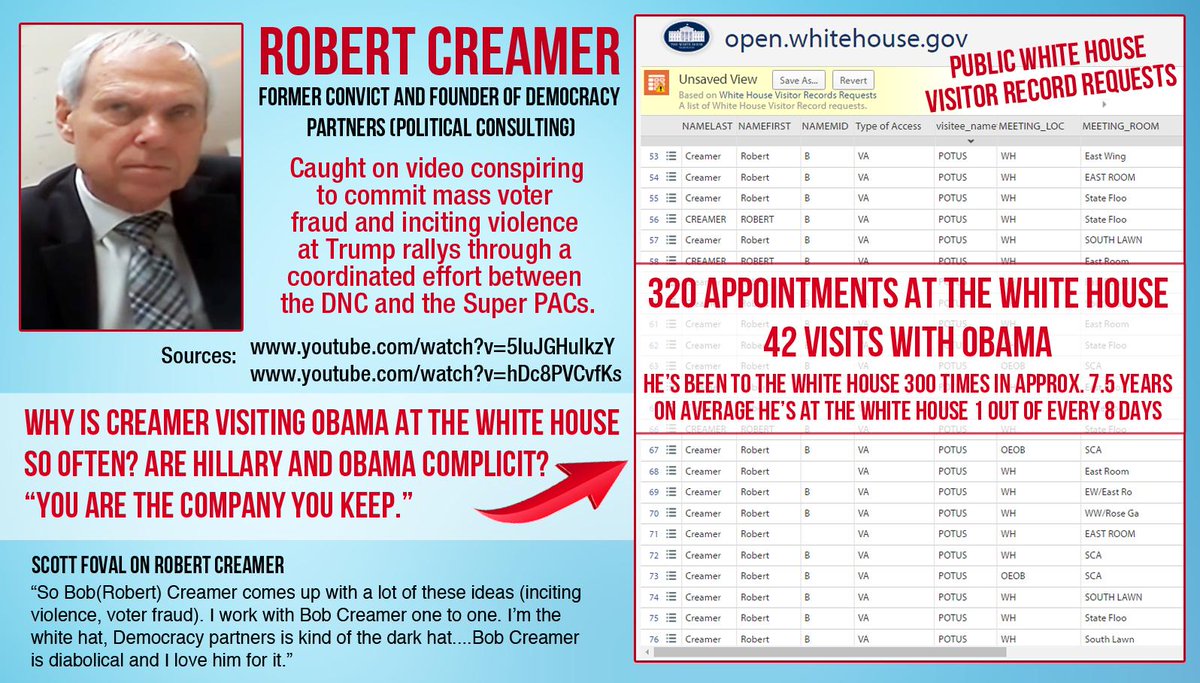 10/19/16: “‘Draw them to punch you’: 2 Dem operatives lose jobs after undercover video comments”: https://www.foxnews.com/politics/2016/10/19/draw-them-to-punch-2-dem-operatives-lose-jobs-after-undercover-video-comments.html That is re Creamer, photo above, who voluntarily “stepped back,” & Scott Foval, the huge blabbermouth in the Project Veritas videos, who was fired after exposure. Of course the DNC denies that what the men said/did was due to anything the DNC believes in or promotes. And the FOX article naturally, at the tail end, rips up James O’Keefe of the “well funded” Project Veritas as basically being a crook. (I saw a tweet somewhere that said O’Keefe is a CIA operative. Who knows,… Read more »

My late father contracted polio in 1954, shortly before Salk discovered the first vaccine. He spent 2/3 of his life in a wheelchair. It really angers me that someone who can walk, normally and for ordinary lengths of distance and time, uses a wheelchair. (I am not referring to the elderly, the frail and infirm.) This is not Hillary Clinton’s problem. She does not have polio, and she is not frail—at least, not at this point. She apparently can walk, but not for normal and ordinary lengths of time and distance. She has different medical problems that may require assistance,… Read more »

Whatever Hillary is taking, DJT needs some too. In the past few debates, he has come off as the low energy candidate, which we know he isn’t. No wonder she ignored his request for drug tests.