Hillary Clinton’s 494-page giant pile of crap, What Happened, was finally released yesterday.
In addition to the many scapegoats she blames for her losing the election to Trump (see “Hillary Clinton blames election loss on white people“), here’s another disgusting piece of turd from the book.

Aaron Klein reports for Breitbart, Sept. 12, 2017, that Hillary bitterly complained about “untrue or wildly overstated” “partisan” “attacks” against her for her use of a private — and ILLEGAL — email server when she was secretary of state, which prompted her to want to make, and stick pins into, voodoo dolls of her imagined enemies.
These are her words:

“It [the private email server] was a dumb mistake. But an even dumber ‘scandal.’ It was like quicksand: the more you struggle, the deeper you sink. At times, I thought I must be going crazy. Other times, I was sure it was the world that had gone nuts. Sometimes I snapped at my staff. I was tempted to make voodoo dolls of certain members of the press and Congress and stick them full of pins. Mostly, I was furious at myself.”

Klein reminds us that Hillary is well-acquainted with voodoo.
On page 528 in her previous memoir, Hard Choices, Hillary wrote that she and Bill went to Haiti for their honeymoon in 1975, where they attended a voodoo “spirit” ceremony with a voodoo priest:

“In 1975 Bill and Hillary Clinton honeymooned on Haiti, meeting [Max] Beauvoir and attending a ceremony. ‘After several minutes of rhythmic dancing to pounding drums, the spirits arrived, seizing a woman and a man,’ Bill Clinton recalled.”

Max Beauvoir was not just a voodoo priest, the UK Independent calls him  voodoo’s “supreme chief”.

Recall that Larry Nichols, the Clintons’ longtime associate who claimed to have killed people for the couple, said Hillary is a satanist who regularly attends a witches’ church in Los Angeles. See:

In Leviticus 18:21, God commanded the Israelites:

“Do not give any of your children to be sacrificed to Molek, for you must not profane the name of your God. I am the LORD.”

In the Old Testament, Gehenna was a valley by Jerusalem, where apostate Israelites and followers of pagan gods sacrificed their children by fire (2 Chr. 28:3, 33:6; Jer. 7:31, 19:2–6). One of those gods was Moloch (aka Molech, Molekh, Molok, Molek, Molock, Moloc, Melech, Milcom or Molcom), an ancient Ammonite god who demanded a particular kind of propitiatory child sacrifice from parents.

“Moloch … was made of brass; and they heated him from his lower parts; and his hands being stretched out, and made hot, they put the child between his hands, and it was burnt; when it vehemently cried out; but the priests beat a drum, that the father might not hear the voice of his son, and his heart might not be moved.”

Excavations of a 1400-1250 BC temple at Amman by Australian archeologist John Basil Hennessy in 1966 found evidence of human and animal sacrifice by fire. Hennesy reported his findings in the Palestine Exploration Quarterly (1966). On p. 162, he wrote:

In a private communication with G.J. Wenham, Hennessy wrote that:

“At least 75% of them (the bones found) belong to children between the ages of 3 and 14, or thereabouts.”

Writing for Breitbart, Thomas D. Williams, Ph.D. explains that Moloch’s other name is Baal and that “Baal was often identified with Satan,” especially in the form of Beezebul or Beezlebub (Lord Baal), the prince of demons, which literally meant the “Lord of the Flies,” whom Jesus Christ identified as Satan.

What is abortion but our modern day version of the ancient child sacrifices to Moloch? See:

Hillary’s blood lust is insatiable.
In What Happened, Hillary calls abortion “sacrosanct” and an un-negotiable absolute and “unlimited” right, including the killing of late term unborns. (LifeNews)
By the way, Hillary and Bill Clinton aren’t the only voodooists in the White House.
In August 2009, it was reported that Mooch’s mom and Obama’s mother-in-law, Marian Robinson, invited an old friend from Chicago — a voodoo priestess — to visit her and perform a “ceremony” in the White House.
Speaking of Haiti, see also “Attn. Clinton Foundation: Hurricane-ravaged Haiti needs the $2B in donations you stole from its earthquake relief funds”. 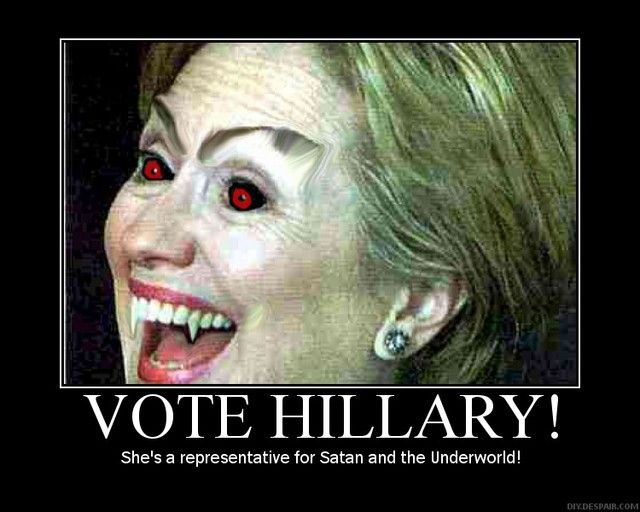 Poor old Hillary, everything she wanted in her life has gone down the toilet. She married for power, and look where that got her. As for her brilliance, nothing she’s ever done has been any good. Buh bye Hill, couldn’t stand you 54 years ago as a Republican conservative, and I sure as heck can’t stand you now.

I suppose the man and woman seized by the spirit was Bill and Hillary I wonder if they engaged in the sex ritual too….

I suppose we should take care. hillary making voodoo dolls of people she does not like (which could be all most every one) may just not be an idle, or idol, threat.

This is no joking matter: I have read a couple of reports—here on FOTM and elsewhere—that Bill Clinton still practices voodoo. And thank you for the information on the Obamas. I had at least two students, who related what they witnessed during some voodoo ceremony. (They said they were in Haiti when they witnessed it). Long Story Short: If you summon demons, they will come. At any rate, I think it’s safe to say we know by now that at least Hillary is possessed. (I suspect Bill Clinton is also; I’ve shared this before). And the Clintons and Obamas are… Read more »

“People, according to their station in life, want—and actually need—Power” vs. “They want the Power to rule over others”
That makes all the difference.
I can honestly say I have no desire for power over other people. That is a violation of one of God’s most precious gifts to us — of free will. JRR Tolkien insightfully identified wanting to wield power over others — a form of enslavement — as the greatest evil.

I completely agree with that. In all my working years, as I “rose” into management, I never wanted to control what others did. In short, I didn’t want power over others.
Everyone has their own cross to bear. I have enough concerns with myself. I care for others but I can do them no good if I don’t try to keep my own spirit in tune.

As one who has been manipulated and triangulated by others on occasion, I am in full agreement. It has definitely warped my mind!

As we’ve said many times, people must make a fundamental choice. You can’t serve Satan AND The Lord. Those who make their pact often receive many material things. Note that this is ALWAYS about her. SHE is all that matters. That’s a classic sign of perfect possession.
While it is sometimes fascinating and always interesting, this isn’t anything new. I absolutely would not put anything past her. She has done much evil and assisted others with their evil. The one thing she DOES NOT need is power.

From an excerpt in her book, she feels that people owe HER an apology (and penance). So not only does she have Moloch fantasies, she thinks she should have been a priest.

A voodoo priestess!
The grandiosity of that woman knows no bounds.

Looks to me like Hillary has delusions of ADEQUACY!

Nasty stuff, isn’t it. Pray against it…

I ran across the other article on Sally Quinn last night and I had the same question, why is there no concern about this? I suppose that is the intent.
The whole “Pizzagate” thing uncovered a vast number of these people who either lead this sickness, or participate in it. It has become the “Kool” thing to do.
Had we not had decades of anti-Christian effort I don’t think this would have been possible, at least not so openly. Now, for most, it simply doesn’t matter.

Obama’s WH Social Secretary Desiree Rogers was a descendant of Marie Laveau, the New Orleans voodoo queen: “Michelle Obama’s new social secretary, Desiree Glapion Rogers was not only queen of the Zulu Social Aid and Pleasure Club twice, but is kin to a very, very, very interesting lady who lies in the old Glapion tomb in St. Louis #1 right across from the city’s first “Creole” mayor, Dutch Morial. Her name? But of course-no one other than Marie Laveau, who married into the Glapion line almost a good 200 years ago! Leveau, who lived from 1801 to 1881 remains known as the… Read more »

Hitlery, that only works for Witches, not B*tches!

Prominent Democrats dress up as the Devil - Fellowship Of The Minds