Yesterday, General Mike Flynn resigned from being President Trump’s national security adviser and apologized for telling then-Vice President-elect Mike Pence an untruth — that Flynn had not discussed the issue of sanctions with Russia’s ambassador to the United States.
Rejoicing at the news of Flynn’s resignation, Philippe Reines sent out this curious tweet, addressed to Flynn and his son:

Less than 1½ hours after Reines sent that tweet, Hillary Clinton chimed in to support her former aide:

Those who are familiar with the Alternative Media immediately know that Philippe Reines’ tweet is a reference to Pizzagate:

On November 3, 2016, Mike Flynn sent out a tweet with a link to an article on True Pundit that the New York Police Department had found in the laptop former Congressman Anthony Weiner had shared with his wife Huma Abedin, Hillary Clinton’s closest aide, emails and other content that implicate Hillary, her subordinates (such as John Podesta, the chair of her 2016 presidential campaign), and elected officials in serious crimes that include child exploitation and sex crimes with minors. Here’s Flynn’s tweet:

The Flynns’ tweets led to an uproar in the MSM, with Washington Post, the BBC, and others all closing ranks in denouncing Flynn and his son, and Pizzagate as “baseless conspiracy theory” and “fake news” although to this day, no law enforcement or any MSM journalist has actually investigated Pizzagate, which leads of course to this question:

How do they know Pizzagate is “fake news” if no one had investigated it?

Two days after Mike Flynn Jr.’s Pizzagate tweet, he was forced to leave President-Elect Trump’s transition team.
All of which brings us back to Philippe Reines’ and Hillary Clinton’s goading tweets about Mike Flynn’s resignation. If Pizzagate indeed is “fake news” and an entirely “baseless conspiracy theory,” why are Reines and Hillary so obsessed with it?
To quote William Shakespeare, they “doth protest too much”.
See also:

From this tweet of Philippe Reines lusting after Dallas actor Patrick Duffy, Reines is most likely a sodomist:

The comet might also represent Lucifer, as a fallen angel, also known as the “morning star.”
The cover of the Economist. https://en.wikipedia.org/wiki/The_Economist

If the Trump Admin fails to prosecute these crimes of PIZZAGATE incl CLINTONS, OBAMA, PODESTA BROS, select MILITARY, CELEBRITIES, POLITICIANS he will be CONSENTING TO IT and we will know it is BUSINESS AS USUAL in DC/BABYLON

Can we all spare a moment for Sweden in this madness. Head in hands moment to be honest. PIZZAGATE IS REAL 100 PERCENT
https://objectivejournal.wordpress.com/2017/02/14/hypocrisy-of-swedens-first-feminist-iran-supporters/

YUP….I know. Fake as F
However there may be something deeper going on…eventually do not be surprised if Sweden and others go full scale Muslim, and do not be surprised if that spills over to Germany as well. Some people are going to view it as a means and ways to get rid of other tribes as well as those who have betrayed their own countries….
Weird maybe but a thought…

CONSPIRACY
If you like politics check out my blog at the link below!
http://BraedenPoliticsLife.com

Nothing to see at comet pizza.
No voter fraud going on either.
Of course neither has been truly investigated either.

The Clintionistas are truly sick people. No wonder they were treated like STDs.

BTW….
Flynn is well known not to be a fan of Iran at all. I just got through as of yesterday reading something from someone who knew him and others, Iran was always conceived to be a prime enemy. Here is a link to read and think about on this: https://www.jihadwatch.org/2017/02/former-obama-officials-loyalists-waged-secret-campaign-to-oust-flynn-to-preserve-iran-deal

Did you ever feel like someone was flaunting something and had no worries about ramifications? Someone is sure being protected.

Reines is a disgusting specimen. He is up to his eyes in Clinton filth and dirty deeds. In fact, when one looks at Brock, Alefantis, Podesta, and the entire inner circle, it becomes clear they’re all cringeworthy and degenerate. Comet & Bucks are likely a ‘franchise’ HQ operation. They should all hang. The Demented One, Pelosi, owns ‘Goat Hill Pizza’. Who knows how many of the sickos in Congress, Pentagon, FBI and IC are involved. The 650K emails uncovered by NYPD detectives on Weiner’s laptop hold the keys (meta data) that would facilitate blowing the entire satanic ring apart. President… Read more »

I’ve had my eyes on “The Demented One, Pelosi,” who “owns ‘Goat Hill Pizza’,” a SF-based pizzeria which is also foreign-registered. Now I can understand why ships and large corporations have foreign-registery, but a local mom & pop pizzeria? Go to Trump’d REDDIT site for details on this: https://www.reddit.com/r/The_Donald/comments/55w48s/breaking_guccifer_20_nancy_pelosis_goat_hill/
Donald is a BIG city boy who learned street fighting a long time ago, and as one who had to do the same to survive, he’s about to hand the Clintonistas their ass and more.

I can hardly wait..And to see Pelosi (and the other male bigot) talking about the Gen. Flynn parody account, & explaining “scapegoat” was too much..luckily nobody heard me screaming.. I’ll check out Reddit, I don’t visit too often, but I’m registered. I have files on the kick-back $$$ she and others received from the bank stimulus. Unbelievable, a Congress full of crooks and degenerates. I just don’t know how Pres. Trump copes with all these two-faced @$$hats.

Your comment is most excellent, filia.aurea, and yes, I certainly hope you can get more on these scum-sucking fakes, as I’m still running my home improvement business and haven’t as much time as I’d like to devote to this. Many thanks, Joseph

Likewise, Joseph. Time is in short supply. Many are devoting hours, days. Progress is being made. Home improvement professionals are hard to come by where I live. Oversupply of what people call “cowboys”. I’m sure you’re kept busy.

Link that might be of interest…
Someone Forgot To Delete Staff List, Pizza Shop Being Used For Enemy Front
https://conservativedailypost.com/someone-forgot-to-delete-staff-list-pizza-shop-being-used-for-enemy-front

Washington Post & BBC are producers of FAKE NEWS so nobody cares if they are upset over Flynn’s tweets. 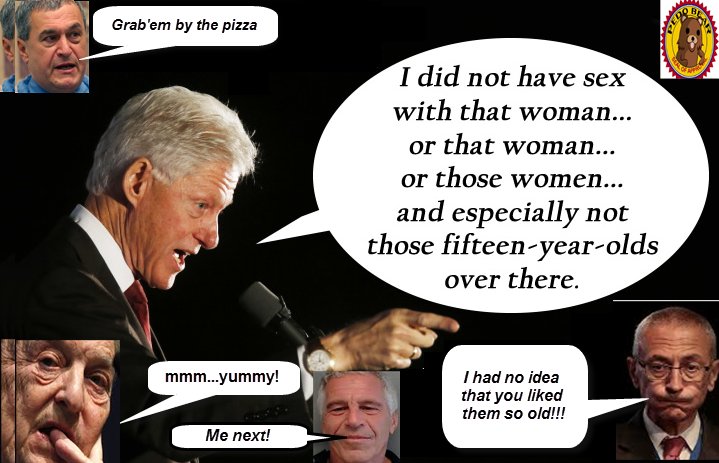 Weak arguments- but still extremely disturbing that Hillary chimed in on this.

By “disturbing” I hope you are not implying surprised?