Here’s a feel-good story that’ll restore your faith that there’s still good in the world.

A female dog, a tiny shih-tzu, found a lost abandoned kitten in a ravine. She adopts the little kitten and starts yelping until help arrives. 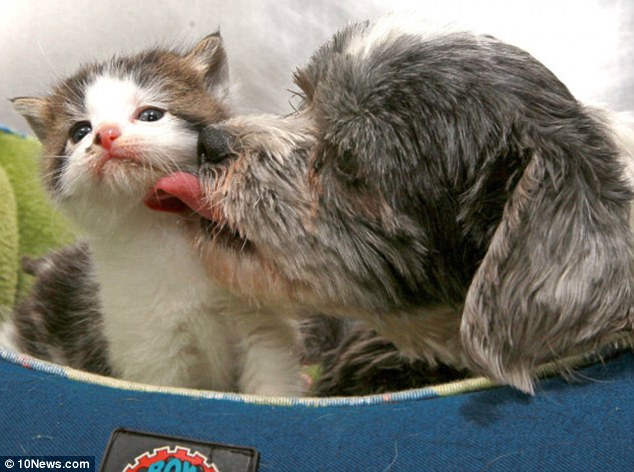 The Daily Mail reports that in mid-May 2013, an animal control officer discovered Goldie in a ditch in South Carolina, and at first thought that the pooch was in trouble.

But it turns out Goldie was actually caring for and nursing a tiny kitten, which somehow ended up in the thicket behind a Home Depot in Anderson, SC (see below). 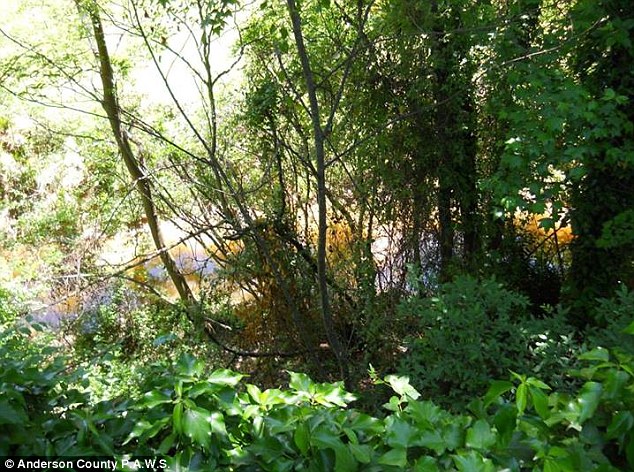 Animal Control Officer Michelle Smith had heard a small dog yelping from the bottom of a steep, heavily wooded embankment behind a Home Depot. So Smith went down into the ravine, where she spotted a ball of fur in a tangle of brambles. When the officer took a closer look, she discovered that the small dog sitting in the bushes was actually protecting and nursing a tiny kitten.

Smith told 10 News, “I didn’t know what to think. I was shocked and surprised and then of course, awww.”

The two were taken to a local animal shelter, where a veterinarian determined that the shih-tzu, nicknamed Goldie, was at least 5 years old, while the kitten, dubbed Kate, was only 5 weeks old.

Goldie’s freshly groomed coat and a striped collar suggest that she used to be somebody’s pet.

Although they are, of course, not related in any way, Goldie and Kate look very much alike, with their black, white and grey fur. 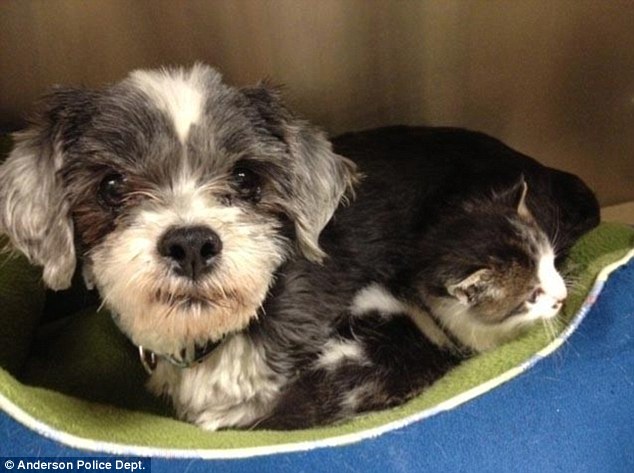 But beyond any physical resemblance, the two have formed a special bond, with Goldie taking on the role of a doting, loving mom in this improbable relationship.

Photos posted on the Facebook page of Anderson County PAWS, the shelter where Goldie and Kate had been staying until recently, show the two to be tightly bonded.

The kitty and her adoptive canine mom nap and eat together, happily nuzzle one another, curl up together in a furry embrace, or simply stare into each other’s eyes.

Goldie is even patient enough to let the kitten climb onto her back whenever she likes. And when Kate walks too close to the edge of their shared cage, Goldie the protective mom would pick up the little tyke by her scruff and carries her to safety. 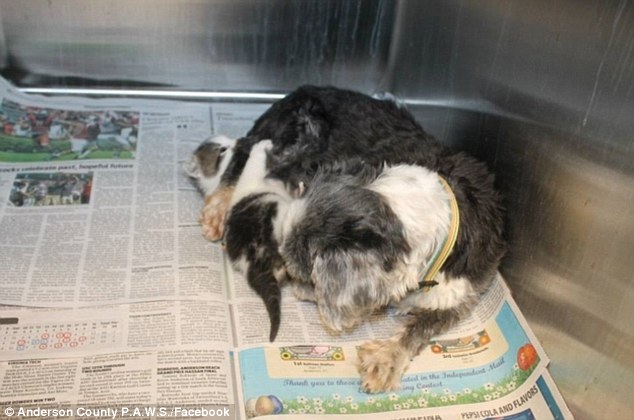 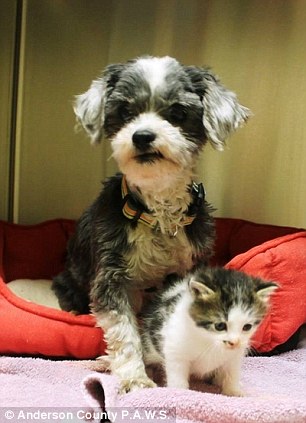 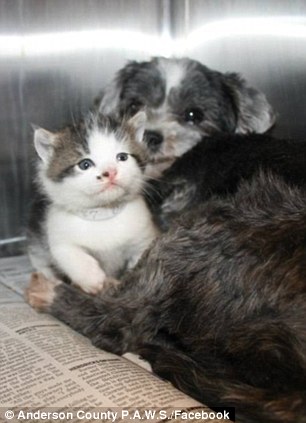 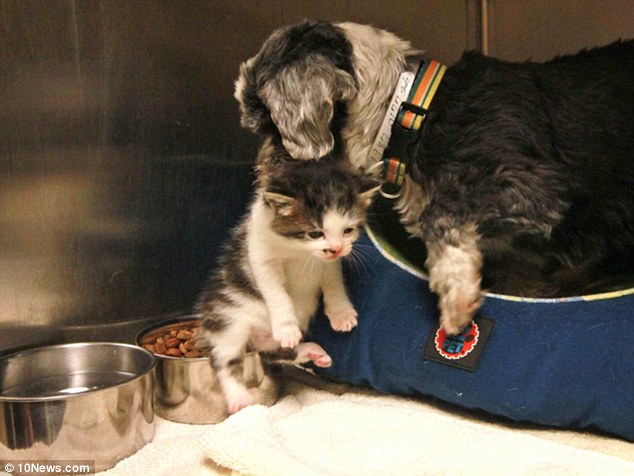 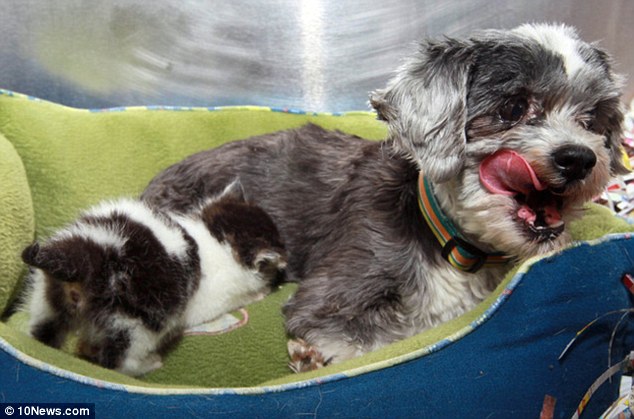 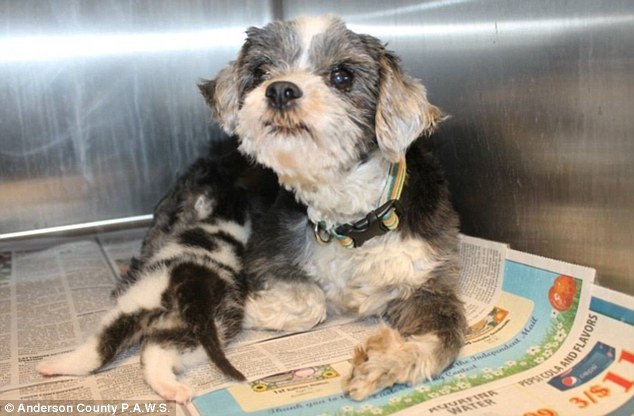 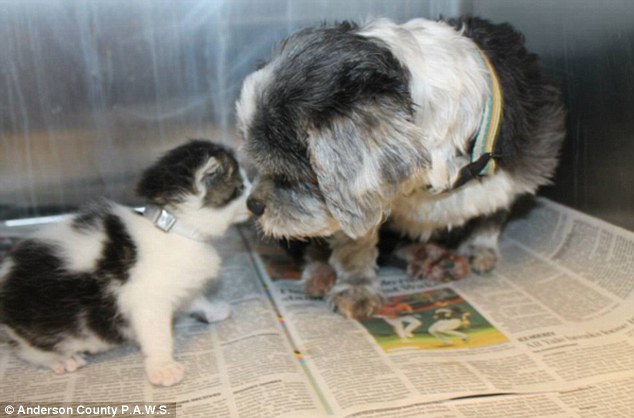 Shelter director Jessica Cwynar said that the maternal pooch likely experienced a surge of hormones, which caused her to produce some milk to feed her adopted feline baby. Shelter volunteers also have been giving the cat bottles of milk – a treat that Goldie enjoys as well.

The tale of the young shih-tzu is shrouded in mystery. Shelter workers say that her freshly groomed fur and collar suggest that she used to be somebody’s pet, but no one has come forward to claim her.

Goldie and Kate’s story has a happy ending. No one had come to claim Goldie, so after spending some time in the shelter, mommy dog and baby kitten were taken in by a foster family – together.

Reblogged this on Observations...

Love the animal stories, whether it’s the feel good ones like this one or those showing unusual species we may not be aware of. It makes my day a better one. Thanks!

I’m glad this story has a happy ending! They are both quite young so I hope they have a long long life together with their new family.