Two weeks ago, a French reader of FOTM threw a big stink at my post “Insane: 16% of French with favorable view of ISIS” and readers’ comments, bitching that we are being unfair to all those brave French people who are buckling the trend.
I said that if and when the French people vote nationalist Marine Le Pen as president, I’d be the first to congratulate them.

Alas, that is not to be.

Despite the fact that “” globalist Emmanuel Macron is a tax evader, thanks to Alt-Rightists on 4chan who obtained and published his damning tax evasion emails two nights ago, Macron won France’s presidential election today in a landslide. (See “French government doesn’t want its people to see presidential candidate Macron’s tax-evasion emails“)

With 65% of the votes, former Rothschild & Cie Banque investment banker Macron, 39, “resoundingly” defeated rival Le Pen (who received 35% of the votes) to be the country’s youngest ever president.
Many French opted not to vote in today’s election, which has the lowest voter-turnout (65.3%) in presidential elections since 1974.

Macron was an unknown less than three years ago when, in 2014, he was plucked from obscurity by socialist President François Hollande and named Minister of Economy, Industry and Digital Affairs. Now, the inexperienced 39-year-old without a political party is poised to become one of Europe’s most powerful leaders.

After Britain’s Brexit vote last year to leave the EU and Donald Trump’s victory in the US, the French election had been widely watched, particularly in Brussels and Berlin, as a test of how high a tide of anti-globalization “right-wing nationalism” would rise. (Do take note that it is the right who are nationalists, which means the left really don’t give a hoot for the interests and well being of their supposed nation/country.)

Le Pen, 48, had portrayed the election as a contest between her patriotic vision of strong borders and French national identity, against Macron, the globalists’ candidate, who favors immigration, open trade, and “shared sovereignty” (an oxymoron!).

In the first round of the presidential election on April 23, Macron had topped the vote with 24.01%, followed by Le Pen with 21.30%, in a crowded field of 11 candidates.

Macron was favored among wealthier, better educated citizens in cities, while Le Pen drew support in the countryside and in poverty-hit areas in the south and rustbelt northeast.

Macron has a plan for the Islamization of France and Europe — here.

Good luck with him, France. You’re too far gone to ever turn back.
https://www.nationaldebtclocks.org/debtclock/france

I predict their next President will be Muslim and remain in office until another Muslim murders him.

UPDATE: Macron has a plan for the Islamization of France and Europe.
See https://diversitymachtfrei.blogspot.mx/2017/05/macron-leaks-contain-secret-plans-for.html

I don’t think the plan is to Islamize so much as to destroy by attrition what’s left of Christian France, the real enemy of France’s Judeo-Masonic deep state that Macron will now front for and then Balkanize what’s left. That common-history syllabus mentioned in the report, presupposing comity, or convivencia, between Spanish Christians, Jews, and their brutal Moroccan overlords sounds like Marxist reeducation borrowed straight from the Soviet Union and would find a ready home in most American school districts as well. If the French knew the real history of Muslim rule in Spain, they’d march the Muslims out of… Read more »

A very connected nowhere-man, groomed for high office by the powers that be, just like obama. And the results will be tragically similar.

Anonymous
Reply to  Paul B.

Reblogged this on Exposing Modern Mugwumps and commented:
How very sad for France, another lost nation to the globalist cabal…fools all.

The ignorant and unpatriotic French have forfeited America’s help with their votes in this election. You reap what you sow!

I just heard Christiane Amanpour on CNN say that French and Europe dodged a bullet by electing Macron. More proof that the French are stuck on stoopid.

I can’t believe it! Is this Trudeau all over again? France will rue the day they put this clown in office. Nothing will change. The only winners will be the muslims. I have been to France twice, the second time I could see the changes in areas bordering the muslim areas. I don’t think I will return. 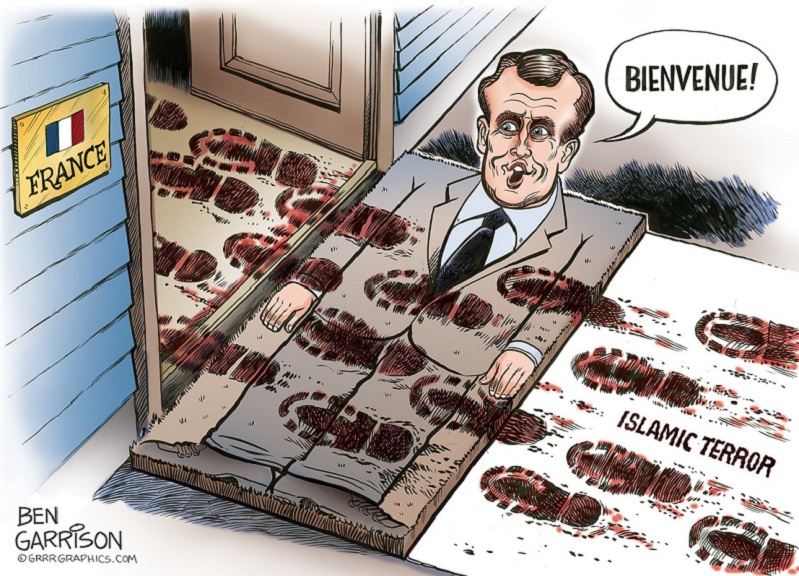 Let’s see, tax dodger, hidden assets, the media and their government working against LaPen, the US French in many polls hid her picture but posted his, Obama did a big support for him, low voter turnout, what could possibly go wrong with France?
I don’t want to hear one word of France needing our help for anything. They are not worthy of putting our precious military in dangers way.
I agree with the above comments, good bye France.

Add to your list of Macron’s suspect “credentials” former investment banker for Rothschild et Cie bank and a BIlderberger.

The headline from Reuters: “Battered Europe gets reprieve with Macron victory.” I see the media has their established talking points.
https://www.msn.com/en-us/news/world/battered-europe-gets-reprieve-with-macron-victory/ar-BBARmCx?li=BBnb7Kz&OCID=AVRES007

Thanks, DCG, for this tip that shows how COMPLETELY idiotic -to the point of Lemming suicidal crowd behaviours- France has become. I SHOULD be working on my new client’s deck plans & Proposal-Estimate, but when I came home, checked my emails [I always go to FotM 1st] I couldn’t believe this had happened. I still don’t, kind of, as it’s just too, too STOOOOOOOOPID as our Dave woud say. Ugh!!! As bad as Napolean had been savaging RC Church properties, it will be nothing compared to what France will suffer under this Rothschild-planted anti-personnel bomb in human form. And George… Read more »

Well, let’s face it, GRAND MARNIER is the only really worthwhile thing the French ever contributed to the world, anyway. (French Kisses and French Fries weren’t even really invented by the fay French.)
~ D-FensDogG
Stephen T. McCarthy Reviews…

France has had a terrible history of terrible ideas, violent revolutions and exporting its intellectual filth to the rest of Europe, and then the World.
It seems to me that France is still possessed by a Jacobin spirit, and, vampire that it is, just keeps resurrecting, like anthrax through the soil with every new generation.
What To Do? IDK…

Personally, I consider this just more proof that all elections, every where, are rigged in one way or another. I can not believe there are that many people, regardless of issues or country, that are just that uneducated or stupid on the issues they feel strongly enough to place their vote. I believe voter rigging or fraud is the very reason we can not get rid of incumbents who have proven their corruption and disconnect to the will of the people time after time in our own country. Certainly obama’s elections are glaring proof of that. I think perhaps Trump… Read more »

There are many ways to rig elections -I don’t doubt it at all, but it is the peoples’ choice so………they deserve what they want and what they get.

From what I read only 30% of eligible voters turned out. Maybe.

I had hoped that this election might have turned out differently, & thereby France, & then all of Europa might be turned from the suicidal coarse on which France &, all of Europa & the rest of the White Race, world wide, are now bent.
But, alas,..that was not to be.
So,..without ,..’Divine’,.. intervention, The White Race, & Western Civilization are doomed to enter a new,..Jew ruled ,..dark age, with no light to be seen, at the end of the tunnel,.
May GOd have mercy,…

This is sick, just sick. If he had even won by a narrow margin,but given a landslide victory can voter fraud really account for all that? Yes, the French can kiss their country goodbye. No French culture? The French truly have lost their minds. Isn’t their culture the reason for the Frenchs previously well known snobbery? No such thing as French cuisine, design ,architecture,language,music ? How can a people be so willing to give up their identity so easily? My guess, it is still Holocaust guilt. Word is the worst demographic for La Pen were the old people who remember… Read more »