Germans now the minority in Frankfurt

From Daily Mail: More than half of residents living in the German city of Frankfurt have a migrant background, according to new statistics. Figures show 51.2 per cent of people living there are either non-German, German citizens born abroad or Germans who are the children of immigrants.
The city’s secretary of integration Sylvia Weber said: ‘We have minorities with relatively large numbers in Frankfurt but no group with a clear majority.’
Turkish migrants are the largest non-German minority that are settled in Frankfurt, accounting for 13 per cent of the population. A further 61 per cent of residents who were born abroad have come from other countries within the European Union.
The vast majority of immigrants had a legal and ‘consolidated’ status of residency.
The statistics were revealed in a 200-page document titled ‘Frankfurt Integration and Diversity Monitoring’.
The report was designed to provide a grounding for the city to better respond to inequalities in areas like employment, education and housing. ‘The trend is clear. We are a city without a majority,’ added Ms Weber.
The report also shows disparities between immigrants and German – with 49 per cent of non-Germans falling below the poverty line, compared to just 23 per cent of original native citizens.
Immigrants are also less likely to be in work, with just 73 per cent of non-German men and 59 per cent of non-German women being in employment. The data shows that 83 per cent of native German men are in work – as are 78 per cent of native German women.
It comes after a book published last year predicted that native Germans would soon be reduced to a minority in Frankfurt, Augsburg and Stuttgart.  The German cities would join others throughout Europe that have already seen immigrant numbers overtake natives, including Amsterdam, Brussels, Geneva and London.
The book, titled Super-Diverstiy: A New Perspective on Integration, criticised politicians’ calls for migrants to inegrate.
The authors criticised politicians’ calls for migrants to innegrate, arguing: ‘In practice the result of these calls to assimilate is that an increasing number of citizens with a migrant background feels excluded and unwelcome.’
DCG

By the year 2050 whites will be a minority in America. If you want to know what America will look like then, and how America will be governed, and how/why America will no longer be a global power with a robust economy . . . look at the case of South Africa today, about 20 years after blacks took over the government. They will destroy what once was a modern, industrialized economy built by Afrikaans.

Germans now have two choices. Fight to regain your country or a death by a thousand cuts.

They need to rise up (while they STILL CAN) and escort those rapefugees OUT en masse. Or you can kiss that awesome German beer good bye. Among many other things.
They need to start hosing those rapefugees down with hoses that spew cheap wine…I suggest Thunderbird. If a muslim even gets a whiff of alcohol, they are punished!
Start throwing pork and sauerkraut! C’mon, get with it! Get rid of ’em all! They’re just parasites- leeches placed on the neck and sucking the lifeblood out of your country(ies)! Get ’em off while you still have the strength left!

the issue with alcohol only applies to wahhabist Muslims and a few other sects. I live in a Muslim country for 5 years and alcohol was consumed on a regular basis by everyone I knew.

Aww crap, I thought I found the perfect solution…. Doggone it, it’s like the same myth about how no Hindus eat beef.
Well, what about throwing pork chops at them? Or pureeing bacon and spraying that in a fire hose at ’em? Maybe that would work! 🙂

It sickens me to see the flight of native born Germans . . . how grateful I am that my ancestry pulled up stakes and left for America. Hopefully, by the Grace of God we can maintain some semblance what America was! 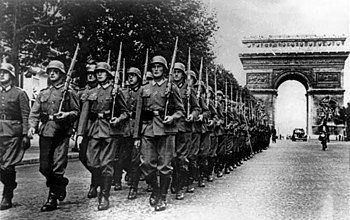 Yes, if only……but then that would have required that the that America on behalf of international Jewry didn’t continue to batter them both mentally and physically after the war.

Only AFTER the war?

Just wait and get ready for the sledgehammer to come down and start smashing your politically correct stupidity! Or the beheadings to start! It will come! Then you will wish you had guns; then you will wish you could defend yourselves. But by then, it will be too late, morons! If you think the Nazi Holocaust was bad, wait for the Muslim Holocaust! I hear much lamentation and gnashing of teeth. Males being executed (the useful idiots,) females being enslaved, raped, abused, (and never mind their ages, because anything goes.)

I’ve said there is no room for any illegals i.e.muslims in our country, they procreate and multiply so rapidly, if allowed, we will loose our identity and our Country, as it is now in Germany. Cockroaches, in spite of pest controls, have endured just about extermination and always prevail -let’s try to eradicate the cockroaches from our home.

“‘In practice the result of these calls to assimilate is that an increasing number of citizens with a migrant background feels excluded and unwelcome.’”
There they go with making their “feelings” the rule to decide political issues. LOGIC should be foremost!

illiterate, inbred, hygiene-deficient, satan-worshiping, rapefugee bestialists are the majority in germany today…. what a contrast to the Germany of yesteryear that celebrated a rich culture, heritage, and strong Christian roots… today, they are ashamed of their history and have become eunuchs beaten down in their own country…only satan could convince Christian peoples to give up everything by taking the first bite in the forbidden fruit of “diversity” which led to shame and guilt; only Jesus can bring them back with repentance and forgiveness. it’s no coincidence that as the germans hold on to their “guilt” from the holocaust, generation after… Read more »

BTW-Heard on last night’s News that Germany voted on recognizing same sex marriage,and Merkel voted AGAINST it. Maybe there IS a good side to her….

No, no good side found in her, she’s just trying to find a balance for her “bare it all” in her youth-hay days on the east side of the wall, Angela is not an angel.

The only reason she opposed it is to appease her Muslim handlers.

Fitting that Frankfurt is the home town of the Rothschilds.

The Rothschilds and their co-religionists don’t have “home towns”.

[…] via Germans now the minority in Frankfurt — Fellowship of the Minds […]

Merkel is Germany’s Obongo. If Obongo had been less lazy and more effective we might be worse off than we are today.
First the New World Odor “choses” her from their stock of former East German communists. Then she sets about opening the gates to the barbarians. She spits on her own flag.
This is not a German phenomenon. This is what they are doing to the world. We’re looking at it and few are understanding the significance of what they’re seeing.

Like when antichrist makes a covenant with Israel and then half way through pulls the rug out and boom. These muslims are being used by the NWO to implement the plan of world conquest. And, the muslims think their religion will be the ‘world’ religion, but once they’re done being useful to the devil, they’ll find out what’s really going on, and it’ll be too late.

The ball is now in the hands of the people, either they take their country back or lose it forever. Gone will be the people, their culture, their food and their children. Do they not realize this?
Some of my ancestors escaped France when the Catholics were killing all Christians and went to Germany, then on the America. The arrived in the Midwest in covered wagons. I can go back to the 1600’s.
Then some of the other side were from Sweden and England. I just can’t win.

the result of these calls to assimilate is that an increasing number of citizens with a migrant background feels excluded and unwelcome.’
Of course, this only applies to immigrants, once the Germans and other Anglo countries are over populated by minorities, this won’t apply to them (whites) of course. They’ll be excluded and definitely unwelcome, in their own country!