George Soros is a leading shareholder in Netflix

Red Pill reports for The Goldwater, March 28, 2018, that Susan Rice, Obama’s national security adviser and UN ambassador, has been hired to Netflix Inc’s board of directors, “but most Americans seem to forget that George Soros is a leading shareholder in the company.“

Soros Fund Management (SFM) has large investments in transportation, energy, retail, financial, and other industries, as well as in public equity and fixed income markets worldwide, foreign exchange, currency, commodity markets, and private equity and venture capital funds.
According to Soros Fund Management‘s latest portfolio, as of December 31, 2017, SFM owns 71,500 shares in Netflix. At the current price of $285.77 per share, the total value of Soros’ shares in Netflix is a whopping $20.43 million.

Interestingly, Soros Fund Management had sold out its shares in Facebook Inc., well before the eruption of the current scandal engulfing Facebook.

Always good to see lists of companies to avoid.

one of the reason i dont like netflix,and all the libtards stuff…anyway,wondering how long we have 2 wait,2 c this garbage evil in jail

One would think that the DOJ can find a way to do that given Trump’s executive order authorizing the seizure of assets of human rights violators.

Oh they most definitely COULD. They WON’T.

Jurist . . . . How can women possibly be that hungry for association, or companionship that they would be sucked into such an evil plot.

Beats me, Lulu. I suspect it’s not either motive you suggest. Instead, today’s young women live such hedonistic lifestyles that, I believe, the real goal is excitement. 50 Shades, etc. They are so used to pleasure and stimulation that they need to get into worse and worse stuff just to feel something. I once read the account of a 40-year-old man who’s a lifelong sex addict. He laments the change in young women these days. He says that in the past there was some courtship and romance required, but the girls these days just want to jump right in the… Read more »

Yes, this is the product of the NWO: 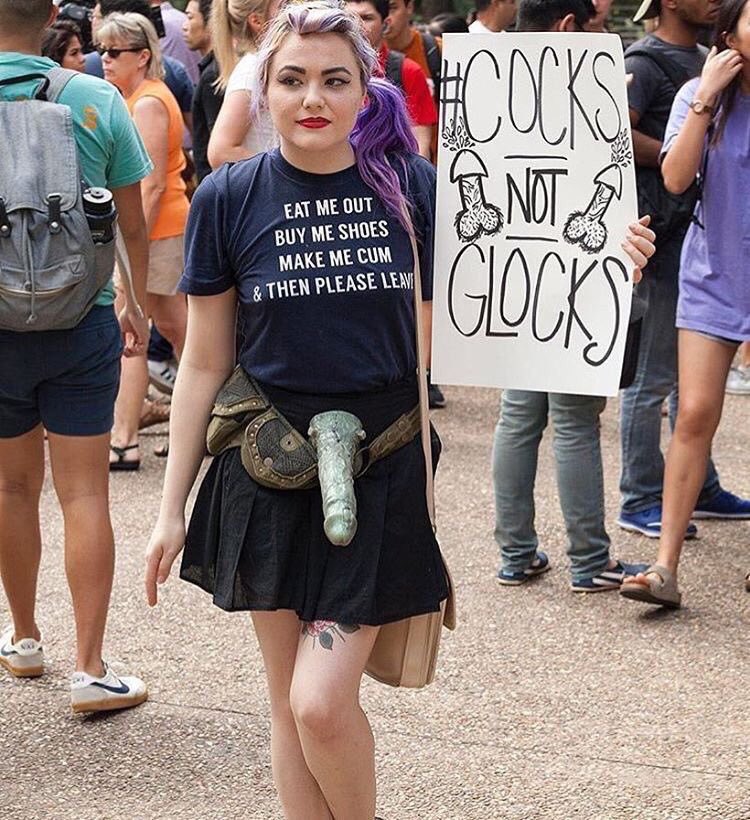 Hard to believe, ain’t it?

So-Am I to understand she has to TELL people to do these things because NOBODY would do any of ’em voluntarily?

Not last weekend, but after Parkland:

My, what nice, “wholesome” girls. I’ll be their parents are so proud of them. What’s your dignity and self-respect compared to the Glorious State?

That’s exactly what has happened, our nation has rejected Christ, and the Apostle Paul told us what that brings:
“And even as they did not like to retain God in their knowledge, God gave them over to a reprobate mind, to do those things which are not convenient; Being filled with all unrighteousness, fornication, wickedness, covetousness, maliciousness; full of envy, murder, debate, deceit, malignity; whisperers” -Romans 1:28-29
Praise God, He saves us even in the midst of such evil.

Dr Eowyn . . . God Bless you for posting this excellent article today. In yesterday’s news, I did see where Netflix had hired Susan Rice to sit on their board . . . . I spent about 15 minutes thinking about “can I live without having a subscription to Netflix?” After my thinking time was up, I called Netflix, told them I was cancelling because of their action of taking on Rice (I object strongly to her, because of her role in trying to persuade the American people that the reason our four brave American men were killed in… Read more »

Auntie, I feel the same way about Netflix. Being 14 year subscribers, the way it has turned so far left and deviant made us have this conversation tonight after reading about Rice and now reading about Soros it is a no brainer.
Soros seems untouchable and if it were anyone else, they would be in jail. After spending over 30 million for the riots and damage done and businesses damaged and nothing done, say plenty. If they can’t arrest him for inciting, what can they do?

Netflix really means “NotChicks”. I won’t be having any of that.

No wonder Obama got a deal to develop shows for Netflix…

If sora$$ has his fingers in it they will use it for an alternate motive he would never let an opportunity to brain wash anyone to bend to his way of thinking with movies or anything he might use.
This man excretes evil from his pores. And his son isn’t much better lock step with him in line to take the helm and steer his money for demonic reasons.

It occurs that if Soros is arrested for any of his part in Human Trafficking,the assets he could lose would nearly pay off the National debt…Wouldn’t THAT strip his gears??

He is one chess move ahead. In October 2017, George Soros gave $18 billion — more than 78% of his $23 billion estimated net worth — to his Open Society Foundation, making it one of the world’s largest “philanthropic” organizations.
https://fellowshipoftheminds.com/2017/10/19/its-war-bannon-takes-on-anti-trump-gop-establishment-as-george-soros-enlarges-his-army-with-18b/

Co-founder of Netflix, Marc Bernays Randolph, is proud to advertise his lineage from the father of propaganda, Edward Bernays, who was a great grand uncle, as well as being the great grand nephew of Sigmund Freud, the Satanist who said, “If the Americans only knew, we are bringing them the plague!” Rice should fit right in, serving the tribe making billions off stolen cinematic technology for a century now and then using their unmerited profits to wage genocidal war against the American people who accepted them in as their equals.

Satanist. Michael Hoffman has another term for them as well. Nevertheless, great info, and thank you for sharing it.
I boycotted Netflix for a while, because it seemed like all they had to offer were LGBT or holocaust films, both of which I had no interest in. I can’t lie, now, I’ll watch some of their foreign programs (I loved the Finnish show, easy living), but, once again the same issue is arising for me. For example, the show Collateral started off well enough, but that too became an agenda-propaganda film/tv, so I turned it off.

Good for you, that’s what has to happen. That’s like cable TV has an “American Hero Channel” (AHC). I call it the “American Hebrew Channel”. Virtually EVERYTHING on there is a Jewish plug. Even documentaries I’ve seen elsewhere have special sections added to them on “The Holocaust”, etc.. Being related to Bernays would not be something to brag about. That’s like saying “my grandfather was the father of manipulation”. When I took Marketing in college I was shocked at the cynicism and deceptive nature of it. Anything hidden in darkness or pretending to be something other than it truly is… Read more »

In re: to marketing, I had a friend in the 1980’s, a son of an ad exec, tell me, that they (NYC ad execs) all basically follow mein kampf. Nothing else. I just never forgot it. And yes, he who told me was a member of “the tribe.”

I do not understand why President Trump cannot use the (unconstitutional) Patriot Act and the (unconstitutional) NDAA to declare Soros an enemy of the state and arrest him and seize all his assets. We know that Soros funds or owns Netflix and a number of other businesses (here in New York, he also has partial ownership of Dinosaur BBQ). But we also need to know his business associations. WHO ELSE is aligned with him? All right, I’ll put it out there: Is he aligned with Chabad? If this is the case (and I am not stating that this is a… Read more »

My suspicion is that he is a Rothschild agent. As such, he is protected. Russia, and I believe Hungary, have so declared him. He has international warrants out on him but I don’t think with any EU countries and certainly not here. He is clearly guilty of numerous felonies. He is also a main distribution point for the Rothschild’s manufactured fiat money. If you want an illustration of what happens to people who try to extricate themselves from fiat money look at Gaddafi. In that case Hillary served as an agent. It seems Gaddafi had accumulated sufficient gold reserves to… Read more »

Not to mention the billions Soros gave to colleges in order to have a say in their curriculum. And we wonder what is happening to our colleges.

[…] George Soros is a leading shareholder in Netflix […]

Just a tip, the image at top of article makes the rest seem invalid… Should have just used Soros instead of adding that other thing, whatever it is.. Most won’t go any further after seeing that, because it makes it look like fake news and hype. I did check the resources, thanks for posting this.

We will use whatever image we want. It’s our blog, not yours.

Reblogged this on On the Patio and commented:
Don’t like Netflix anyway. Amd to sign the Obamas is hilarious! If their series tanks it would send a message that they are not interesting even to their own cult followers..

PC Madness: Netflix bans employees from looking at anyone for more than 5 seconds | The Olive Branch Report

[…] George Soros is a leading shareholder in Netflix […]