Add this company to the growing list of companies handing out “crumbs.”
From NBC Los Angeles: General Motors announced Tuesday it made $12.8 billion in pre-tax profits in 2017, and the company said union-represented workers will receive profit-sharing checks of $11,750.
The company reported a net loss of $3.9 billion, driven primarily by a $7.3 billion accounting charge related to the recent tax reform and $6.2 billion charge related to the sale of Europe’s Opel unit. But without the expense the company posted record per-share earnings.
About 50,000 GM factory workers will get $11,750 profit-sharing checks later this month. GM’s profit-sharing checks are higher than its Detroit-area rivals. Ford announced in January profit-sharing checks of $7,500 for an estimated 54,000 UAW-represented employees, and Fiat Chrysler said it would pay its UAW employees an average of $5,500, the Detroit Free Press reported. Fiat Chrysler also said it would give U.S. workers, aside from senior leadership, $2,000 bonuses, according to the Free Press.
Excluding one-time items, GM made $9.9 billion, or $6.62 per share, the highest since leaving bankruptcy in 2009. The earnings beat Wall Street estimates. Analysts polled by FactSet expected $6.33 per share. Full-year revenue was $145.6 billion, which also beat estimates.
“The actions we took to further strengthen our core business and advance our vision for personal mobility made 2017 a transformative year. We will continue executing our plan and reshaping our company to position it for long-term success,” GM CEO Mary Barra said in a news release.
GM says the change in the U.S. tax code forced it to write down accumulated losses that it uses to avoid corporate income taxes. The assets went from $33.6 billion to $24 billion. Since the rate fell from 35 percent to 21 percent, the losses are worth less.
DCG

Right, no “crumbs” for the UAW, which was the actual beneficiary of the $20+ billion bailout, and not GM, nor the American auto buyer, nor the American taxpayer who got stuck with the bill. Auto work is good work if you can get it while half of American workers—net of real inflation—earn less and therefore have less purchasing power than they did twenty years ago. The UAW will be sure to throw its support to the Republicans in the midterm elections, right?

Many companies such as suppliers lost everyone because of the bailout and many lost their pension funds that were raided. I think Delco was one.

Watching Hoyer through out the evening, his body language said he wanted to be anywhere but sitting next to Pelosi.

Must be the stench of sulfur…. 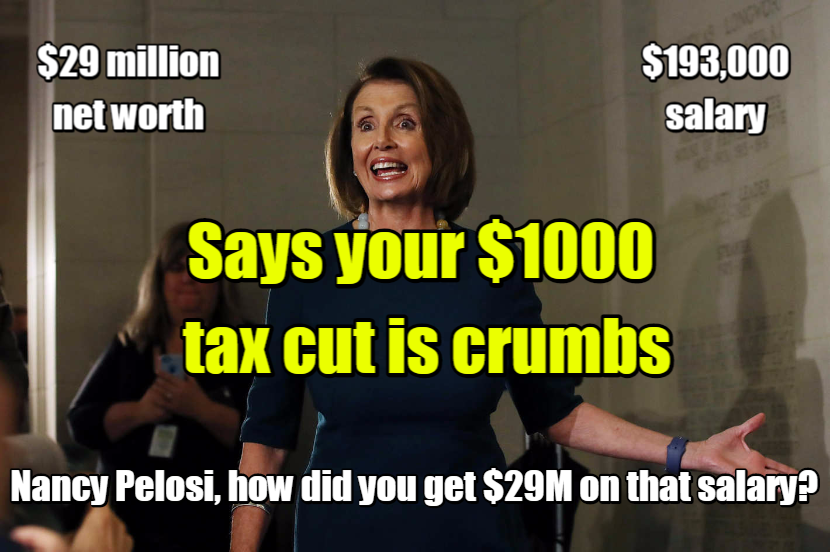 She was great at insider trading. Legal for Congress, but not the little guy. I think she and her husband have a next worth of almost 200M, This was the woman that wanted the government to pay for a train to her vineyard.
When she was speaker she wasted millions with her massive military jet flying her home every weekend and ordered it stocked with the best food and drink. Sometimes she ordered the jet to be ready. Then let it sit for hours.
To her one thousand dollars means nothing. May she lose every dime.

Oh its FAR more than that. Last I heard, years ago, he was worth over a $1B. She doesn’t need a job. But, just like some students owe for loans, she owes for bribes.

My, she must be a very good “saver”. “Frugal Nancy” they call her. What a joke.
When I was a kid in Sacramento I went to school with a lot of these politician’s kids. They all lived in VERY upscale houses that were much too expensive for their parents stated salaries. How DOES that work? Hmmmm?

I suspect these bonuses, pay raises and profit-sharing checks are going to lead to much higher prices .. on everything. We retirees are going to feel the brunt of it by having to actually live on crumbs.

Oh, those liberals everytime they open their mouth is to puke, “Crumb Nancy” probably has an illegal crew working for her at home and she pays the crumbs. They take money in and give crumbs away. I am glad for every company remunerating their employees, that represents efforts, loyalty and trust, it always works both ways, high five.

couple of comments:
-What kind of profit sharing checks have they gotten in the past?
-The union’s leadership can try and sell the the rank and file on who to vote for, but once you’re in the booth, nobody knows which circle you fill in. the word need to get to the workers as to who put the money in their hands. And who’s been stealing them blind in the past.

now they will report a loss every quarter to avoid paying taxes…….