AFP reports (via the French-language Le Point) that on Feb. 16, 2017, by a show of hands, France’s left-leaning National Assembly (the lower house of France’s Parliament) passed a law against pro-life, anti-abortion websites, on the grounds that such websites “spread misleading information” about abortion, a crime punishable by a maximum of two years imprisonment and a $30,000 fine.

On the basis of the 1993 “hindrance to abortion” law, Dr. Xavier Dor, a well-known elderly and almost blind pro-lifer, was fined heavily for having given knitted baby boots to a woman he spoke to in the public stairway of the building where Planned Parenthood has its Paris offices.

Minister of Women’s Rights Laurence Rossignol said that the new law targets pro-life websites that “mimic” or look similar to pro-abort institutional websites or seemingly-official hotlines. Rossignol said “Anti-abortion activists remain free to express their opposition to abortion provided they honestly say who they are, what they do and what they want.”
Writing for LifeSiteNews, Jeanne Smits points out that since the new law’s “wording is not restrictive . . . any person or group aiming to call public attention to the dangers and risks of abortion will be potentially at risk of prosecution.”
Smits explains:

The upper house repeatedly tried to impose less severe wording without trying to scrap the law entirely. In the absence of an agreement between the two governing bodies, the National Assembly has the last word and so it achieved its aim of virtually outlawing pro-life speech.

The law was adopted by a show of hands – an indication that few lawmakers were present in the Chamber – during which all left-wing representatives present as well as a majority of the centrists voted for the measure. It is the latest in a series of pro-abortion laws that have made “voluntary interruption of pregnancy,” as the French euphemism [for abortion] goes, a purely elective and 100 percent publicly-funded “fundamental right” since socialist François Hollande came into power five years ago.

The criminalization of negative information on abortion is the result of a process that began when members of Hollande’s socialist government realized that Google searches were linking women to pro-life groups. These sites explain the risks and realities of the procedure and where to find assistance to help women keep their baby.

The Republican (center right) party voted against the law, saying that it is a deliberate infringement of freedom of expression. The Republican party intends to submit the text to the Constitutional Council in the hope of having it declared contrary to the French Constitution.

That’s proof that STUPIDITY is a Universal language.

We are used to censorship in other countries, but in the last few weeks, we are starting to see the results of censorship coming from Google here in the US via their ties to the deep state. Infowars, Breitbart, Drudge and others are being censored. AdRoll, the advertising agency which is a subsidiary of Google cut off Infowars advertising through them. I receive a wonderful web email from a site called “Natural News” and Google shut them down for a few days and they’ve just been reinstated. I haven’t read the reason they shut them down yet but, you can… Read more » 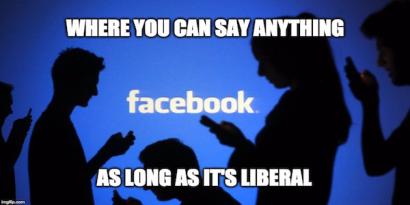 Government Axiom #4: “Being nothing but a criminal syndicate concerned only with stealing and killing under cover of providing security and “services,” government must always monitor and control the thoughts, attitudes, behavior, and speech of their subjects, victims. All statements otherwise are lies.”
An American citizen, not US subject.

And Israel is pressuring Amazon to stop selling books that dispute the Jewish, ‘Holocaust’ naritive

I’m 74 as of a few days ago. In my lifetime France has slipped from its former stature with Italy as one of the two greatest European RC-Christian nations to now being little more than an abused street waif, soon to be torn apart by the two greatest European terrorist entities, Islamo-fascism and the Zionazis, the latter having learned their lessons all-too-well! From age 9 or 10 on I was raised in large part by the two Sams who were my father’s partners in their Chicago medium-sized plumbing & heating business. They were why I learned Yiddish –not Italian– as… Read more »

CHILDREN AT CONCEPTION by steve finnell Life begins at conception. Children are children at conception. Women do not conceived non-human fetuses. Matthew 1:20 But while he thought about these things, behold, an angel of the Lord appeared to him in a dream, saying, “Joseph, son of David, do not be afraid to take to you Mary your wife, for that which is conceived in her is of the Holy Spirit.(NKJV) Mary did not conceive a dead fetus. Mary conceived Jesus, and He was alive. Life begins at conception. 2 Samuel 11:3-5…….5 And the woman conceived; so she sent and told… Read more »

What is more sure to bring God’s wrath than the murder of babies? But before condemning the French, let’s see if their country comes to its senses the way America is trying to do. For a very long time, the US government has grossly misrepresented the majority on issues like abortion. Maybe that is true of the French, also. At least I hope so.