The global financial-economic crisis that began in 2008 hit Iceland especially hard.
In 2007, Iceland had the 7th highest average per capita income in the world ($54,858). The next year, everything fell apart. Iceland’s banking system crashed. The combined debt of the country’s three largest banks (Glitnir, Landsbanki and Kaupthing) exceeded Iceland’s GDP by SIX times!
In October 2008, the Icelandic parliament passed emergency legislation to take over, i.e., nationalize, the domestic operations of the three banks, but not their foreign debts or assets. On 26 January 2009, the coalition government collapsed due to the public dissent over the handling of the financial crisis. A new left-wing government was formed a week later and immediately set about removing Central Bank governor Davíð Oddsson and his aides from the bank through changes in law. In April 2010, the Icelandic Parliament‘s Special Investigation Commission published the findings of its investigation,revealing the extent of control fraud in the crisis.
Now, Iceland is putting the man who was prime minister when the economy crashed, on trial. 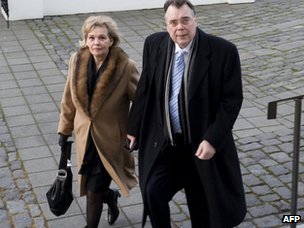 BBC News reports March 5, 2012, that the trial of former Icelandic Prime Minister Geir Haarde, on charges of negligence over the 2008 financial crisis, has begun in Reykjavik. Haarde is the first world leader to face criminal charges over the crisis.

The proceedings are being held at the Landsdomur court in the first case for the Reykjavik-based tribunal.
The country’s three main banks collapsed in autumn 2008, plunging Iceland into a deep recession. Haarde, 60, led the Independence Party government at the time. He is accused of being negligent because he had not ensured financial safeguards were in place.
Haarde had sought to have all charges dismissed, calling the trial “preposterous” and saying that his conscience was clear. He has pleaded not guilty and rejects the charges as “political persecution,” insisting he will be vindicated during the trial. As he took the stand, he said  he was only doing what he thought was best for the country at the time: “I reject all accusations, and believe there is no basis for the trial. [But the trial will be] the first time I get a chance to answer questions regarding this case.”
Some Icelanders see the trial of Mr Haarde as scapegoating, while others argue that public accountability is essential following the country’s financial collapse.
+++
Good for Iceland!
Now why can’t we do that in the United States? — beginning with Bush’s Treasury Secretary Henry Paulson and Obama’s Treasury Secretary Timothy Geithner!
~Eowyn

thankyou for this article Dr.Eowyn! The financial crisis in 2008 was by design. I believe with both parties involved. The head bankers of the world,GHW Bush,Soros as a push into the New World Order. We can and we WILL catch these corrupt criminals. It is unfolding as we speak. Communist plan to say the least. I am tired also of GW Bush being protected as he was right in the middle of it. The unsuspecting public,while we were sleeping.

Good for you, Iceland. If they keep setting good examples like this, one can hope the rest of the world (or at least the responsible parties) won’t keep being able to buy or legislate their way out of trouble.

here in this place Fianna Fail had their conference last weekend and they applauded the architects of our financial downfall. And to rub salt in the wounds they voted for same sex marriage and gays to adopt innocent children. Makes Obam look like a nice guy!