From Daily Mail: A builder who died after falling from a 10ft ladder was actually killed by Covid-19, scientists have claimed.

The man, who has not been named, suffered lacerations to his forehead and bruises to his face, elbow and left hand after he fell into the yard of an under construction family home. Medics were called and rushed to the building site, in Croatia, and desperately tried to revive him, but he was declared dead at the scene.

A test for coronavirus was then carried out, as required by local medical guidelines, and came back positive. An autopsy revealed large sections of his lungs were blocked – leading doctors to diagnose acute respiratory distress syndrome (ARDS).

The life-threatening condition, which normally results in hospitalisation, is triggered when vital organs do not get enough oxygen.

Academics at the University of Zagreb said the Covid-induced illness had caused his fall, which they argued meant the death must be recorded as a Covid-19 fatality under World Health Organization (WHO) guidelines.

The scientists said the evidence ‘unequivocally’ led to Covid-19 being to blame for the death — but they did not specify how.

Experts today suggested the man may have lost his balance while climbing the rungs, leading to the fall, which would make Covid-19 to blame. They added that going up a ladder while suffering from ARDS was the ‘last place I would want to be’.

The doctors said they were initially suspicious a fight had occurred between the man and his co-workers, who had lived together for ten days, because no one saw the man fall from the ladder.

But after an autopsy revealed severe damage to the lungs, they said they could rule this out. The man had suffered from a headache, fatigue, fever, cough, chest discomfort and shortness of breath in the week before his death, his co-workers said.

They had asked him to go to a doctor, but he had refused their advice. The man also had type 2 diabetes and was a smoker, which both raised his risk of death from Covid-19.

The decision to attribute the death to coronavirus was presented in a study in the Journal of Forensic Pathology by pathologists led by Velibor Puzovic from Dubrovnik General Hospital.

The WHO defines a death from Covid as one ‘resulting from a clinically compatible illness, in a probable or confirmed Covid-19 case’.

Heart attacks, cancer, strokes, motor vehicle crashes,suicides, and now a fall from a ladder. The progressive-globalists are desperate to falsely inflate “covid” death numbers to keep the masses fearful, cowering behind their face diapers, and willing to give up all their rights for the imaginary safety and security of their draconian mitigation measures. Now that the covid conspiracy has been neatly packaged and connected to “climate change” and social justice, the great reset is in full swing. Next comes the mandatory vaccine and “show us your papers” if you plan to work, travel, or purchase anything. Dissolve national borders, transition… Read more »

Gotta keep feeding and maintaining the hoax some how.

Walking and chewing gum at the same time also causes the ChinaVirus, too!

Woman says her dad ” died today in a nursing home. He was tested for Covid 3 times over the last 3 weeks. He was negative every time yet we are told Covid will be on his death certificate as the primary cause.” 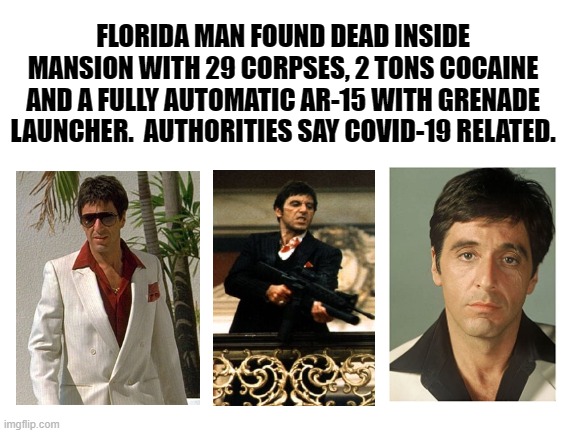 Oh! I’ve got a GREAT newslink re: the CON-vid LIE:

THE NUREMBERG CODE 1947 http://www.cirp.org/library/ethics/nuremberg/ “The voluntary consent of the human subject is absolutely essential. This means that the person involved should have legal capacity to give consent; should be so situated as to be able to exercise free power of choice, without the intervention of any element of force, fraud, deceit, duress, overreaching, or other ulterior form of constraint or coercion; and should have sufficient knowledge and comprehension of the elements of the subject matter involved as to enable him to make an understanding and enlightened decision… It is a personal duty and responsibility which may not be delegated… Read more »