With polls showing Americans’ plummeting approval of Obama, we on FOTM have often wondered who are the people who still support Skippy.
Now we know the identity of at least one of them.
On Tuesday, Sept. 27, 2011, 36-year-old Desperate Housewives actress Eva Longoria appeared on Jimmy Kimmel Live to gush about Skippy. She then trashed Americans who oppose her idol, calling us a “dangerous” “extremist movement”.
Thanks to Mellie of PatriotActionNetwork, here’s a transcript of what Longoria said:

LONGORIA: And, you know, I’m a big Obama supporter no matter what he’s been through. He’s been beaten up the past couple of years.

KIMMEL: Did you tell him that?

KIMMEL: And was he receptive?

LONGORIA: Well, he’s been very receptive for me, because I’m a big advocate for Latino issues. And, so, he’s been a big listener and he’s done a lot of coalitions and a lot of round tables regarding what we want changed and-

KIMMEL: When you say he’s a big listener, you’re making fun of his ears?

LONGORIA No! No! You know, he keeps getting beat up lately because there’s such an extremist movement happening and it’s a very dangerous– For me, it’s very dangerous because it’s not the character of America. It’s really under attack. And he’s been governing in, like, a state of emergency since the time he went into office so we haven’t really seen him do what he can do.

Sadly, this is another case of someone whose IQ is the same as her shoe size. The latter, according to Celebrity Shoe Size, is 6.5.
Better stick to your day job and leave politics to the adults, Longoria!
~Eowyn

Like I said over at NB earlier today.
Never heard of her.
-Dave

Eowyn, I don’t understand one thing… Why disgreeing, having a different opinion or point of view is now associated with dangerous, extremist or violence? Everytime one says “I don’t like or agree with this or that” there is a bunch of people saying “it is because you are an extremist, dangerous, violent or full of hate kind of person”. Why??? It is the same thing everytime. Is it lack of ability to debate why they are pro the thing that we are against? i just look around and see thousands of examples of this, from Miss Longoria nonsense above to… Read more »

Well, when you make a living “acting”, reading words other people wrote, you probably haven’t had to develop your own thoughts to apply them in the real world. Spewing talking points, other people’s words, is so much easier.

Dear Sieg,
You’ve identified the core issue — the Left’s refusal to acknowledge the right of opposition in a democracy.
What Longoria displays is the much-vaunted liberal “tolerance” about which they keep congratulating themselves. Of course, it turns out they are some of the most intolerant people on Earth.

Oh the pathetic vitriol of the left. And yet, unlike Longoria, so many of them claim intelligence… hmmm, last I checked, Intelligence doesn’t equate with Wisdom. Is that fluffy enough coming from us “dangerous” ‘righties’, Miss L?

Eva Longoria is a prime example of plain (without layers of makeup), rich and STUPID. She is scary without her “game face” or one of Mark Cherry’s scripts to form her thoughts. We can only hope she fades into obscurity when her idol, Obama, is swept out of office next year.

I didn’t know that! Thanks to your tip, I quickly found these pics: 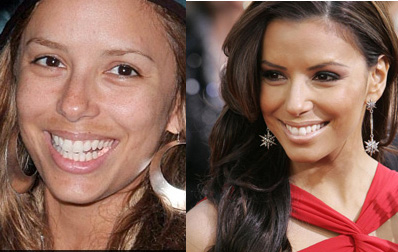 Eowyn:
Always glad to help. Hope appetites for breakfast were not lost because of untouched pics of Eva “Hag Face” Longoria. These almost rival Debbie Wasserman-Schultz after 3 hours with a makeup artist.

Another Hollyweird liberal bimbo who actually thinks intelligent people care about what she says. Typical of this administrations choice of bedfellows. Her insult to women along with the democratic party suggesting we “vote like our lady parts depend on it” shows how shallow and stupid she really is. I prefer to “vote with my lady smarts” and vote for the Romney/Ryan ticket and I suggest Ms. Longoria go back to robbing the cradle and whatever bimbo type activities she is use to.