David Vives reports for The Epoch Times that anti-government protests in France are growing ever larger as an estimated 125,000 yellow-vested demonstrators in Paris took to the streets yesterday, despite Prime Minister Edouard Philippe’s concession last Wednesday to scrap the tax hike.

The 4-week long protests, dubbed the Yellow Vest movement because of the yellow vests worn by the protesters as a symbol, began online in May 2018 as a protest against a gas tax hike (of about 25 cents a gallon) and metamorphosed into street riots against high taxes, eroding living standards, and what many see as the government’s indifference to the concerns of France’s regions and ordinary people. The movement has spread beyond France to Belgium.

Note: Since 2008, all motorists in France are required by law to have high-visibility yellow vests in their vehicles when driving, as a safety measure should the driver be required to exit the vehicle on the roadside.

In Paris, a ring of steel of trucks and reinforced metal barriers surrounded President Emmanuel Macron’s Elysee Palace, although Macron himself has gone AWOL, unseen in public all last week.

More than 1,200 people were arrested before the Saturday protest began in an effort to mitigate violence as much as possible. The December 1 riots had damaged the Arc de Triomphe and injured 130 people. Police also confiscated from protesters anything that could be used as protection such as helmets, protective glasses, and cartridges of saline solution for the eyes.

Saturday’s Yellow Vest crowd was overwhelmingly male, a mix of those with financial grievances and apparently experienced vandals, who tore steadily through some of Paris’ wealthiest neighborhoods, smashing and burning.

Demonstrations have been taking place elsewhere in France as well. Police and protesters clashed in the southern cities of Marseille and Toulouse. About 89,000 security forces are deployed across the nation, including military, local police, and special police, who are authorized to engage in physical contact if necessary, as well as use batons and flash-balls, a non-lethal hand-held weapon.

What the French government doesn’t say is that they’ve called in the European Union (EU) military, as indicated by armored vehicles with the EU’s blue-and-gold-stars flag.

Below is a cell-phone video, showing two EU armored vehicles being deployed against the protesters in Paris.

Among Saturday’s protesters was retired General Christian Piquemal in a yellow vest. He said, “France has been a beacon for the world, it was a country with eternal vows, and today it’s totally decaying. We need to find ourselves again as people who share common values.”

Political columnist Eric Verhaeghe says that “The base of the yellow vest movement is ordinary people … who are desperate,” and that the heart of the movement is libertarian, wanting less government and more freedom, with aims similar to the original Boston Tea Party and the modern Tea Party movement in America.

Meanwhile, the French government has taken a leaf from the American Left’s playbook by blaming the Yellow Vest protests on Russia.

Bloomberg reports, Dec. 9, 2018, that France opened a probe into possible Russian interference behind the country’s Yellow Vest protests, after reports that social-media accounts linked to Moscow have increasingly targeted the movement, and that Russian-linked sites, e.g., Sputnik and RT, have reported a mutiny among police, and of officers’ support for the protests.

According to the Alliance for Securing Democracy — a unit of the German Marshall Fund of the U.S. which monitors pro-Kremlin activity — about 600 Twitter accounts “known to promote Kremlin views” have begun focusing on France, boosting their use of the hashtag #giletsjaunes, the French name for the Yellow Vest movement. French security services are looking at the situation, Foreign Minister Jean-Yves Le Drian said Sunday in a radio interview.

The CIA should take their TOW missile supply earmarked to be delivered to the friendly Al Qaeda rebels in Syria and send them to the Yellow Vests in France before the Globalists solidify their tyrannical European Super State!

Joseph BC69
Reply to  Patrick Cornell

Do you really believe that the CIA, which is now the praetorian guard of the 10% elite that runs the USSA, would really do that? No, never, for it would promote the same revolutionary violence as was created by the American colonies to establish themselves as a new nation. You need to understand what the former US Republic has morphed into, exactly as the once Republican Rome morphed into its Empire and statism.

Yep, ET call “Rome”. Isn’t it odd that no matter how much time separates, the actions are always the same? I guess the lesson is that over reaching rulers will always be opposed by defiant eaters.

What an opportunity this is for those who would be our masters, the globalists, to inoculate the public to the shock of seeing the EU’s military in their streets. God help us.

Joseph BC69
Reply to  TrailDust

Ah, TrailDust, once again what you say is too, too true!

This is part of the implementation of a plan devised by the founder of the European Union, Richard von Coudenhove-Kalergi. “The white races of Europe should be destroyed and replaced with a race of Eurasian-Negroids who can be easily controlled by the ruling elite.” “Praktischer Idealismus,” 1924. He was the first recipient of the Charlemagne Prize (1950.) Just look at the list of subsequent recipients, what a crowd! Emmanuel Macaroon was an elite Rothschild banker groomed for his position today, perhaps an even greater threat to national recognition let alone sovereignty than Teufele Merkel.

Joseph BC69
Reply to  marble

Dick von Kalergi is a wannabe modern-day Machiavelli. If so, then who is his Prince?

There’s a lesson here to be learned and kept in mind:
The French citizens have yellow vests; the Americans have black rifles.

This does not surprise me one bit.

Where is Macron, still hiding?

Under his bed, afraid that his boss (the Rothschilds, not the French people, of course) will dump him.

He is under his bed reading HOW TO LOSE YOUR HEAD by Marie Antoinette.

They should seize a couple of those armored cars and use them to destroy the others. They are now being invaded by The Odor. This is what happens with rebel cattle.

The French middle management of The Odor do not trust the French military or cops. I hope they keep this up until the whole Macron government crumbles. They should make their “Frexit” now.

If the French leave Belgium and Italy will be right behind. All of this is SO obvious. This is why they hate Trump so much. They have a problem with the Polish and Hungarian “managers” too.

As I’ve written here before, I knew since leaving high school in 1960 that a European Union would never succeed: I already knew enough European history to know that sooner or later nationalism would rise higher than allegiance to a Pan-Europa. In any event, what we have in the European Union is essentially what was once Hitler’s plan for a United Europe with Germany at the economic and political helm, of course, which it is today.

Yeah Joseph, they keep “repackaging” the same old goods. Wasn’t that precisely what the Communists were after with “The International”? I see that Angie Merkel is out today complaining that Trump has ruined “The New World Order” (sniff!).

Let us not forget that Frau Merkel was (and is) a Communist. Everyone stands around scratching their heads at her actions. Why? They are completely consistent with her stated beliefs. 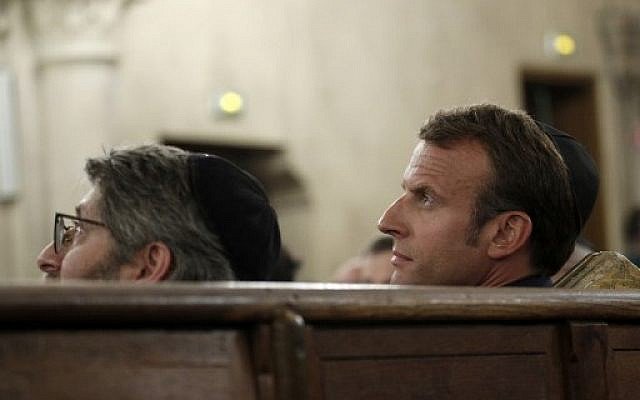 Those vandals may be agents provocateurs. The police always like to infiltrate revolutionary and protest movements to discredit them.

Joseph BC69
Reply to  Joseph Magil

Of course, there may be a few Quislings, but I think 98% are genuine patriots.

The Yellow Vests should take the protests into the Moo slimy “no-go” zones.

Have to say I don’t trust that the yellow vest thing is legit, after all it smacks of “color revolution” (in this case yellow, what does yellow signify in this context, one wonders?) Not that the eu-stapo or macron are any better of course, but I suspect this is being played up for a polarizing event with a catch 22 sub-plan, so to speak…. the real legitimate resistance get swept into the yellow vest movement, effectively nullifying them and controlling what goals they aim towards by a group mentality, the whole yellow vest group is likely controlled opposition by someone… Read more »

Well, Macron is a real World Odor manager. I don’t think Le Penn is. I haven’t seen any of these Yellow Vests buying Macron icons. I will say that they appear to be too effective to be running on autopilot.

Nonetheless, I’d rather see this all over Europe than the apathy we’ve seen.

Those vehicles, when ignited, are excellent for roasting pork. The French people should appreciate that.