Businesses and brands going homo or “gay” is so yesterday.
The latest trendy thing is to go transgender, although biologically speaking, there is no such thing as transgenderism. (See “American College of Pediatricians speaks truth on transgenderism”)
In April, Dove Soap launched a propaganda ad campaign on #RealMoms, and uploaded a commercial to YouTube with this description:

Meet #RealMoms whose diverse parenting styles shatter stereotypes about motherhood and prove that there are no rules about how to be a parent today. From Cassidy, who is raising her son on a cattle ranch, to Elise, who brings her daughter to breakdance battles – we’re so inspired by moms around the country who trust their way.

One of the “real moms” (beg. at the 0:37 mark of the video) is Shea, a graduate student with boobs and a deep man’s voice because — duh — Shea is a biological male!

For all we know, Shea may be a pre-op (or non-op) MtF “transgender” with breast implants and a penis — just like Baphomet. (See “The Devil is transgender”)

Have you heard of the parable of the scorpion and the frog?

It is the Left’s nature to destroy words by distorting or robbing them of meaning. Homosexual becomes “gay”; illegal alien is “undocumented resident”; invaders are “refugees” and “migrants”; and a biological male is a “real mom”.
George Orwell anticipated all this 68 years ago in his dystopian and very prescient novel, Nineteen Eighty-Four.
Come to think of it, is there anything that the Left touches that doesn’t turn into crap?
H/t FOTM‘s MomOfIV
~Eowyn

I’ve had enough. I promise I will never buy Dove again!

Telling them to just sell soap is probably useless. Somewhere in the chain of command lurks the insidious taint of Social Justice Warriors on a holy mission to spread their rotted gospel by any and every means at their disposal. Like all foul messengers don’t just reject them but also the one who sent them. If CNN can be brought down Dove will be a piece of cake.

To really have an effect, avoid ALL Unilever brands!
https://en.wikipedia.org/wiki/List_of_Unilever_brands
Curious that one of their logos closely resembles one of those pedo signals:
“..the bulk of the company’s ice cream business falls under its “Heartbrand” brand umbrella, so called because of the brand’s heart-shaped logo.”
Could be coincidence I suppose…

Thanks for the list. I see my Dermalogica face lotion is on that list. I need to buy more lotion soon…guess I’ll search for a new brand.

Or make your own, it’s very easy. Making your own soap is simple too.

One product, which I’m putting a sanction on it !
DOVE your soap & freak statement, my MONEY !!

Dove needs to take a flying leap along with Maybelline. Boycott Dove and their freak show commercial. Call the company, and let them know their soap commercial “stinks”. Dove has now gone cuckoo. Leeann

Dove can take their soap, and any other products they pander to the public and stick it where the sun don’t shine! Besides the obvious, you have a “rock climbing” chick with a very young baby–does it make a whole lot of sense to indulge in dangerous sports when that baby will need you for the next 18 years to parent it? This is so gross, I can barely believe that any ad agency would come up with this kind of crap . . . yet we see one after another of these large businesses bend over backwards to go… Read more »

Auntie Lulu: It seems that over the last 30 years, feminine women seem to be scarce in movies and television series. Even the pretty ones lack softness in their demeanor which is replaced with hardness. It’s just something hard to describe, but they’re missing nurturing personas. Now, they want to pass off men in drag (freaks), as females (Dove commercial). The liberal left continues to make this country morally and spiritually “sick” with their perversions which they try to normalize. I blame the “church” and silence from the pulpits, for not taking a stand against perversion. I believe there will… Read more »

Are they going to be making soap-on-a-rope?

Dove was always a little “limp-wristed” for my taste. I prefer that orange smelling gritty soap,it cuts even gear oil. For most stuff I wash with Dawn dish soap. I figure if it’ll wash a duck,cleaning my hands should be easy….

So you’re a “Lava Man”, huh? Me too, but I’ve learned to be careful when thoughts turn passionate. Sand and suds can be a dangerous mix.

I actually love it when they do this. It makes shopping MUCH easier. I no longer have to consider Target. Now I can cut the time spent in the soap aisle.
If I drive by a shop with rainbow accouterments, I keep driving. Of course its more effective if you let them know that you will not buy their products and are going to advise everyone you know to do likewise.

I used to be a die-hard fan of dove soap (pink) when I was a teenager (after my mother’s example) and one day, I wondered why the ingredients weren’t listed on my soap box…their ability to hide the ingredients was quite deceptive. I decided if I didn’t know or like what I was putting on my skin, then I didn’t want it on my skin. And ever since, I have been a fan of transparency with natural soaps, homemade soaps, etc. For the tranny commercial that insults ALL natural born men and women…all I can say is: Being a mother… Read more »

I already didn’t like/ buy their bar soap, or any bar soap. Some of their body washes seem too creamy…. Recently tried Dove’s new shower foam too. But the bottle, with a large pump, is difficult to fit in my limited shower space. Also isn’t as sudsy as I expect from a foam.
Now I may have to tell Dove that and also add my disapproval for them pushing transgenderism.

Well…advertising for business is just that—advertising for business. NO guarantees that the advertising is truthful, honest, or even timely. Hope they get all the “tranny” business….maybe a nano-percentage of the soap market…if that? Remember when smoking cigarettes was advertised as “healthful” and glamorous??????? And even today—there is a commercial about running a marathon and then everyone breaking out the beer and whooping it up. Sure—let’s all run a dehydrating 26-mile marathon, and then drink up on a dehydrating beverage to celebrate……DAH! All of this crap is just that—CRAP. Turn it off…or flip to another channel. Never buy Dove again…do whatever.… Read more » 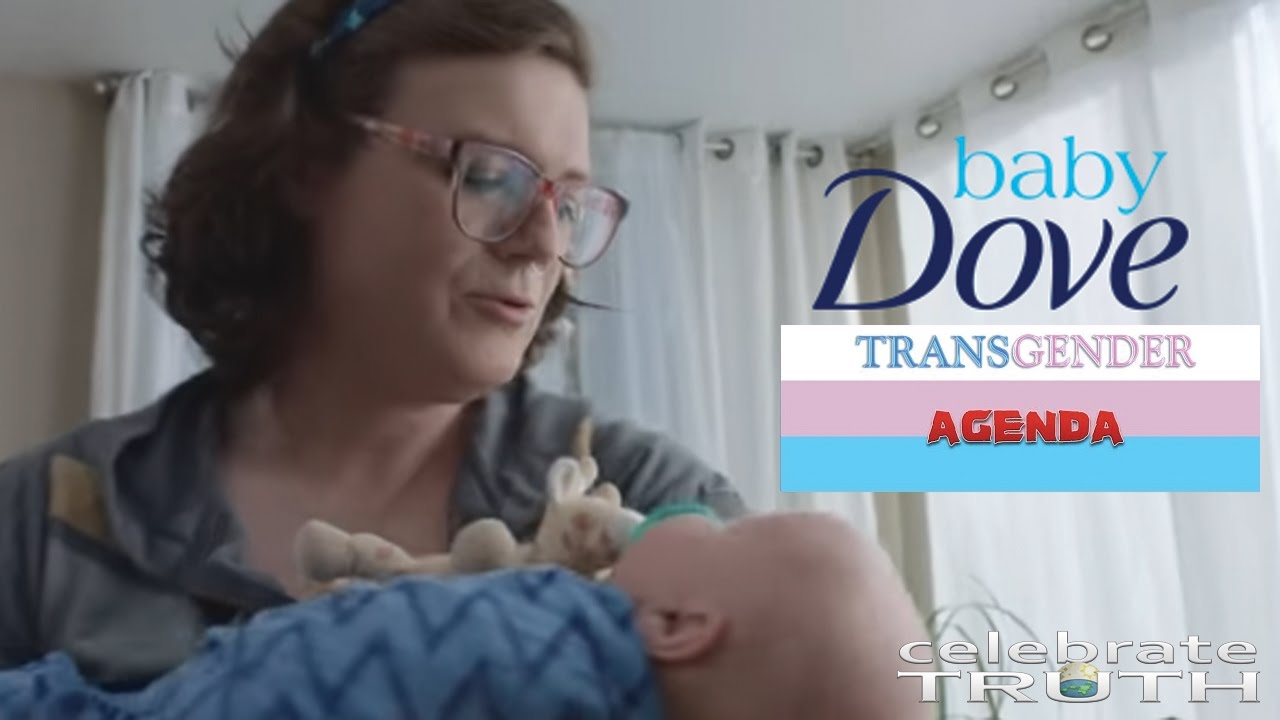 To the Unilever management and Board, I promise a boycott. Dove soap is just one brand. Unilever owns over 400 brands, but focuses on thirteen brands with sales of over one billion euros: Axe/Lynx, Dove, Omo, Becel/Flora, Heartbrand ice creams, Hellmann’s, Knorr, Lipton, Lux, Magnum, Rama, Rexona, Sunsilk and Surf. To the tranny ‘real moms’, I feel sorry for your current confusion but God says you can turn back toward the light. We hope you do. To all the SJWs who think they are getting over on the world with this agenda, I say CHEW SOAP https://www.youtube.com/watch?v=lkOBu06JWTE

If Dove is the last soap in the market, (yuk) no one will dare come close to me. I’m only kidding!!! I like soap not Dove and water.

Ivory is white racist
Dove is weirdo queer.
I’ll stick with Irish Spring, (unless it turns out to be gay lick.)

Make your own soap, it is much netter for you and dirt cheap.
As for trannies and gays, I secretly hope they wake up in a sharia compliant country.

“Come to think of it, is there anything that the Left touches that doesn’t turn into crap?”

No, nothing.
Nothing at all.

No Love for Dove! Compare this 1957 Dove Soap commercial, 1-min., with a VERY FEMININE lady. It “creams your skin while you wash.” Wait for the sudsy tub scene when she sticks up her leg & points her toe, all very feminine vs. today’s Dove TRANNY-BUTCH FREAK:
https://www.youtube.com/watch?v=jWD0co3qFpI
I’ll stick with the Doves Above!
(the beautiful fluttering doves at the beginning of the commercial)

[…] via Dove Soap goes transgender — Fellowship of the Minds […]

Dr. E., check out Devvy Kidd’s article today about the homosexual destruction of the military…it’s very difficult to read.
https://newswithviews.com/destroying-our-military-from-within-continues/

This is satire, right?

You are naive, right?

Admin
DCG
Reply to  Some Guy

How is calling out Shae’s biological reality ridiculing him?