Leonardo doing what he does best (besides dating young models): being a hypocrite.

Leo on a vacay aboard a super energy guzzling yacht

From Fox News: Leo DiCaprio picked up an environmental award in NYC this week — but hypocritically expanded his carbon footprint by 8,000 miles when he obtained the honor, by taking a private jet from Cannes, then flying straight back to France on another jet for a model-packed fund-raiser a night later.
DiCaprio was at the Cannes Film Festival this week and was spotted there partying at club Gotha on Monday with model Georgia Fowler, then jetted back to New York for the Riverkeeper Fishermen’s Ball at Chelsea Piers on Wednesday, where he was honored by the clean-water advocacy group and Robert De Niro.
Just 24 hours later, DiCaprio reappeared back in France for amfAR’s glitzy Cinema Against AIDS gala, where he gave a speech.
DiCaprio’s foundation just pledged $15 million to environmental causes at this year’s World Economic Forum. And during his Oscar acceptance speech he said, “Climate change is real. It is happening right now, it is the most urgent threat facing our entire species.”
But he’s also been slammed for his use of private jets and yachts. Environmental analyst Robert Rapier, who said the actor’s movie-star lifestyle “diminishes his moral authority to lecture others on reducing their own carbon emissions,” told us of DiCaprio’s latest trips:
“[He] demonstrates exactly why our consumption of fossil fuels continues to grow. It’s because everyone loves the combination of cost and convenience they offer. Alternatives usually require sacrifice of one form or another.” Rapier added, “Everybody says, ‘I’ve got a good reason for consuming what I consume’ . . . It’s the exact same rationalization for billions of people.
DCG
Please follow and like us:

This joker is nothing short of being a sleaze-ball. He rails about “climate change” and then jets around the Earth for trivial reasons. Why is it that the promoters of these various events don’t seem to have a clue when it comes to DiCaprio?????

Before I woke up I used to think what a talented actor he was. I now think these characters are pretty much the same…selfish and hypocritical. He, Johnny Depp and Brad Pitt just keep harping on about their ’causes’ and such like. All the while as they continue to marry younger women and jet around in their G-4s or 5s, telling the mere mortals to live green and ‘moral’. 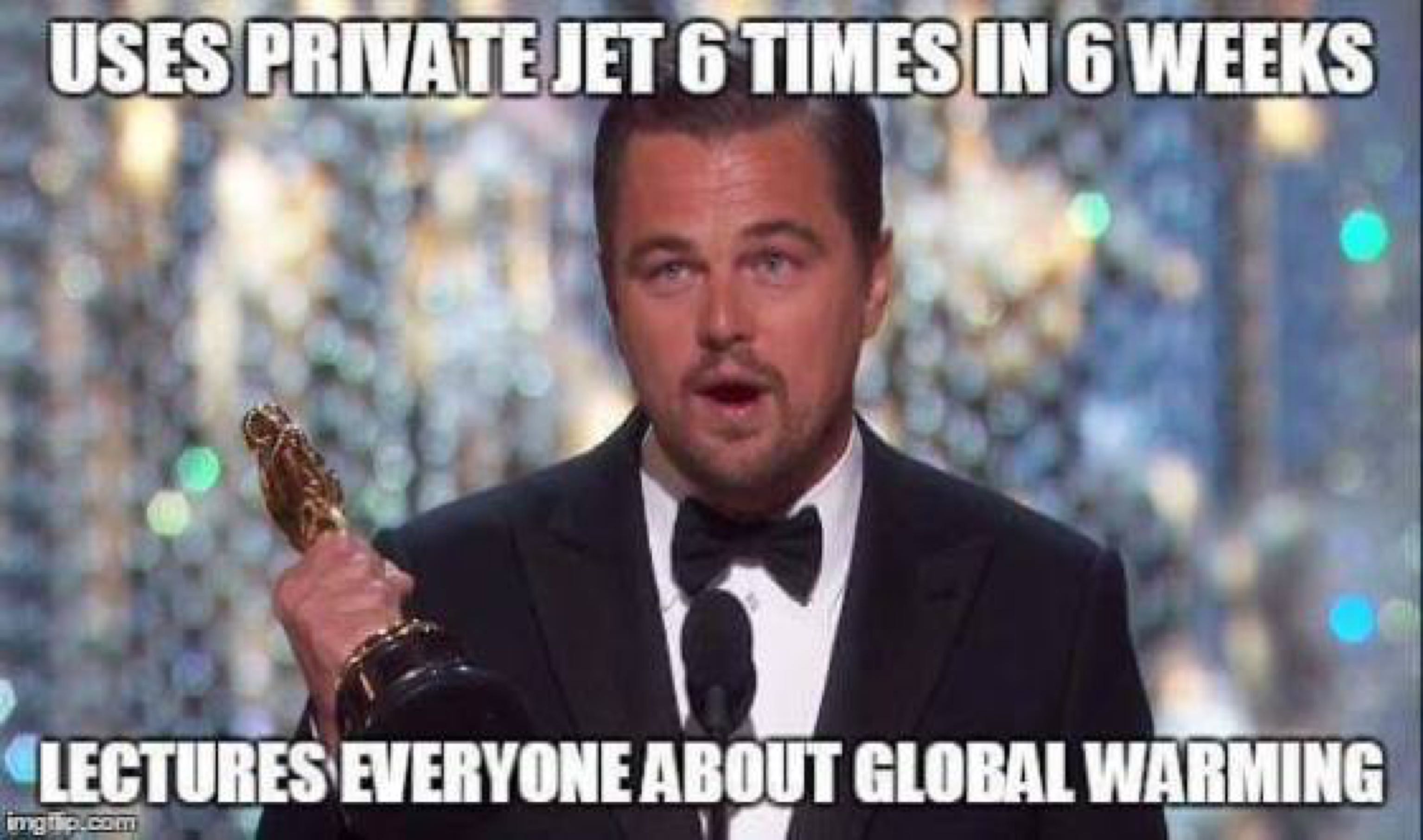 “ROSE ROSE! I’m a Hypocrite and so enslaved by riches and fame I am blind deaf and dumb…….ROSE!”
Never liked Jack Dawson, pretentious little shit thats why he did such a good job playing him in Titanic

It never ceases to amaze me how Di Caprio is so utterly oblivious to his hypocrisy. Must be his narcissism. But then, how does one explain his fans, some of whom occasionally come on FOTM to defend his hypocrisy? [scratches head]

Answer : Never underestimate the idiocy of the general public . Living proof , the Nigerian putz in the black House, not once , but twice

diCaprio has surprised me with his acting ability. Be that as it may, I have two questions, given the fact he is steadily advancing his career and public image. First, who is fronting him? Who is supporting him? Who are his allies? Second, who owned the private charter plane he buzzed back and forth in? I raise this point for a reason: I’m not against private jet owners; They’re entitled, and they’re necessary. The jet owners and their clients are not joined at the hip. But I would imagine they form some sort of political alliance, even in an indirect… Read more »

i believe it’s his own private jet.

There is certainly never a shortage of evironmental stories and abuses with the Hollywood set.
Just like during the severe water shortage and many insisted on watering their lawns through it all.
The list is getting longer, but we no longer spend a dime going to see anything they put out.
They refuse to accept that maybe, just maybe, there is no warming.