On the night of November 24, 2014, after St. Louis County prosecutor Bob McCulloch’s announcement of the grand jury decision not to indict police officer Darren Wilson in the shooting death of 18-year-old Michael Brown, the Missouri cities of Ferguson and St. Louis ignited in a conflagration of riots, looting, and burning.
Note that prosecutor McCulloch must have known that timing his announcement for 8 pm Central Time is sheer lunacy because anyone with two brain cells knows that darkness provides the perfect cover for looters, rioters, and arsonists.
Ferguson is part of the Greater St. Louis metropolitan area, with a majority Black population (67.4% in the 2010 census).

Most of the destruction took place within two square miles, centering on Florissant Ave. and Chambers Rd. in northern St. Louis (with a majority Black population), right on the eastern edge of Ferguson.

I don’t watch network TV news, so the images captured in the video below are the first I’ve seen of the mayhem.

It was a Devil’s night of hell on Earth.

[youtube=https://www.youtube.com/watch?v=ZDLpiEWlFZ0]
Here’s a breakdown and analysis of the video:
The video begins with a fire burning inside and smoke billowing out of the building of the Auto Zone store.

Three men dressed in black hoodies and pants are outside the TitleMax Title Loans store. One of them smashes the glass door.

Another store, Auto Parts, is engulfed in flames.

Throughout all this, the voices of black men are audible, as cars drive past, honking, as if this was some ordinary night on the busy main street of some small town in America. Who are the people in the cars? Are they rioters or gawkers?
At the 0:52 mark in the video, four white men wearing facial masks, dark caps, dark jackets with some insignia on the front and back. One man is carrying a rifle.

Who are these men?
At the 1:05 mark, a fire is burning inside TitleMax Title Loans.
Beg. at the 1:10 mark, we see an extraordinarily brave unarmed woman determined to protect a Papa Johns store. A man (#1) in a dark jacket and backpack, wearing a light-colored cap and face mask, is breaking the glass window of the store. A white woman with short dark blonde hair confronts the man. A black man (#2) joins man #1, shouting at and arguing with the woman. Man #1 defiantly throws another rock at the window. More shouting at the woman. Man #1 kicks the window and shoves the woman against the boarded-up door. She stands firm.

At the 2:13 mark, a group of five (including a couple holding hands!) stand in front of the Fashion R store. One of the group smashes a window with a garbage bin, as looters go in and out of the store’s broken door carrying armfuls of clothes.
At the 3:15 mark, things get really interesting.
A group of seven men in military-green jackets and pants, light-colored head gear and white face masks, carrying backpacks and assault rifles, stand around a car parked to the side of the Advance Auto Parts store. One of the men, dressed in black, throws something incendiary (a flashbang grenade?) into the car.

By the 3:24 mark, the video camera has moved away from the paramilitary men.
I cropped the second picture above to get a closer-up view of two of the men. Note the military field-green color of their uniforms, the big backpacks, white masks, and white shoes.

They look paramilitary. What were they doing, throwing a grenade into a car?
The video camera then pans across the Advance Auto Parts store, showing a fire inside.
At the 3:28 mark, three more paramilitary men (inside the yellow circle I painted) are walking on the sidewalk past a row of cars parked in front of the auto parts store.

At 3:37, the video camera comes in for a split-second close-up of three of the paramilitary men who had been standing around while the black-garbed man threw a grenade into the car.

At 4:47, another business completely engulfed in flames.

At 5:09, a man wearing a gas mask and dark clothes with the word “POLICE” in white on his back, walks past with a German Shepherd dog on a leash. Note that he looks nothing like the paramilitary men at Advance Auto Parts.

At the 5:27 mark, TitleMax Title Loans is now completely engulfed in flames. You can hear the crackling sound of the fire. Next door is Hunan Chop Suey Chinese Restaurant, which also was burned down.

At the 6:48 mark, a group of men in dark clothing and helmets are standing next to two black police cars with flashing lights at a Mobile gas station. You can hear a black man’s voice saying they are “SWAT team.” Note that the SWAT men look different from the paramilitary men at Advance Auto Parts.

At the 8:06 mark, a big store with the words “LOVE” on one of its windows looks ransacked and looted.

The video ends with the image of a white man dressed all in black with short dark hair, wearing dark glasses and a black mask over his mouth, carrying some sort of weapon. Is he one of the SWAT team? Note that he does not look at all like the paramilitary men.

Here’s a side by side comparison of paramilitary dudes vs. SWAT dude:

So what were those paramilitary men doing at Advance Auto Parts, throwing an incendiary bomb into a car? Had they set the store on fire earlier, out of the sight of the video camera? Did they set other cars on fire like these at the 7:18 mark in the video (below)? What about the businesses like TitleMax Title Loans and Hunan Chop Suey that were burned down? Did the paramilitary guys also set the stores on fire?

To add to the suspicion, in the video below, a man who identifies himself as a former fire chief, firefighter and a fire academy certified instructor, tells Alex Jones that in his expert judgment, the fires in Ferguson were the work of TRAINED arsonists.
[youtube=https://www.youtube.com/watch?v=TLz9qPJF3ec]
See also:

This whole mess was groomed from the start. To have the AG show up so quickly before the investigation is done reeks of plot. To know the thug’s older partner in crime has a long rap sheet and lied out his rear about everything and nothing was done nor was he called on the carpet was another signal. Then to send three reps from DC to a thugs funeral whole ignoring a fine honorable highest ranking member killed in action funeral was the final straw. This was the emergency they had all been waiting for, so it wouldn’t go to… Read more »

This is indeed the devil’s work.

Yes, and the devil’s name is Barack Hussein Obama.

Given the hidden agenda of this white house, it is highly likely we will see a race war in the next year, providing a pretext for martial law.

Reblogged this on Taking Back America and commented:
This is interesting…

What the heck they’re doing setting things on fire, while not letting the Ferguson PD or the Guard out there, is beyond me. 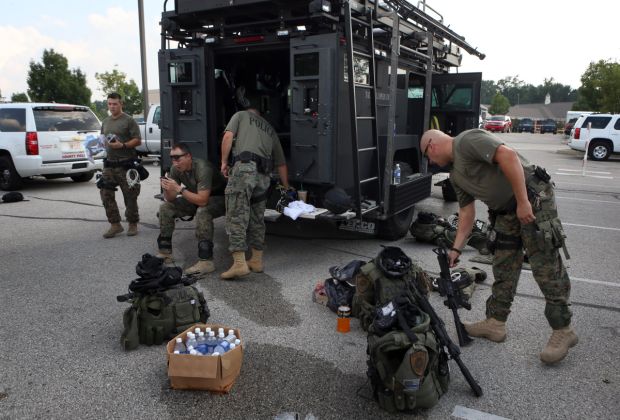 Dr Eowyn–most excellent question about the white face masks. This whole thing just stinks to high heaven. I have a very hard time accepting that anything like this could be so well orchestrated if it was not the White House that was doing the orchestration! As it has been said time and time again–elections have consequences! It’s just that no one could be brought to think that these things could possibly happen. Wonderful post.
P.S. I’m glad it’s time for “the snow” again–I just love it floating down across my screen! You are the best–thank you.

Not sure, I think they’re white surgical masks so they don’t inhale smoke particulates or pepper spray, which they probably added for the occasion. Wearing green/camo by cops is the “miltarized police” thing and/or a sign of watching too many war movies… since when do they need to operate blending in with foliage? Just like the dude with the Kaybar fighting knife above– when will he need that during crowd/riot control?

seems to be a concerted effort to get a race war started….result will be greater police powers

Out of chaos comes order– it’s an old ploy…

I keep mulling this over, something just doesn’t seem right. Are we seeing our police, are we seeing BO’s private army causing problems, or do we have some copy cats? I go with my gut, something is amiss. I keep waiting for the next emergency and the next shoe to fall. Ulsterman reported a few months ago, that Jarrett was overheard bragging they have so much more to do to us yet. Is this part of it, or the recent raised taxes that no one is talking about or another FF soon on the horizon. Are they itching to use… Read more »

valerie jarrett scales me almost as much as the black pansies and Louis farakhan. I was reading an article that claims Jarrett actually runs then white house and Obama is her bitch. I have watched a few videos of her speaking and to be honest it may as well have been the devil himself speaking I have talked to a few local town cops here and they concur that the leftist elites are pushing hard for total race war. I asked a cop who he thought they were planning on using all the hollow point rounds on and he said,… Read more »

What a coincidence! Ground Zero of Ferguson riots was slated for redevelopment 2 years ago -

REALPOLITIK: Ground Zero of Ferguson riots was slated for redevelopment 2 years ago | RIELPOLITIK

What a coincidence! Ground Zero of Ferguson riots was slated for redevelopment 2 years ago - Cronyism,Corruption and Lies in D.C.

[…] all the rioting and looting and burning in Ferguson, St. Louis, and across America protesting the grand jury’s decision to NOT charge white Ferguson police […]