Because corporate mergers are what Americans are truly worried about. Good luck with that platform demorats!
From MSN: Democrats rolled out a new economic platform Monday in hopes of winning over President Donald Trump‘s populist base with promises to take on big businesses, lower the cost of prescription drugs and create jobs.
The campaign — “A Better Deal” — is intended as a counterpunch to the president’s frequent criticism of the lackluster recovery and stagnant wages under President Barack Obama and Trump’s vow to restore the economy to 3 percent annual growth. Democrats are also searching for ways to reconnect with working-class voters whose deep frustration with their own economic prospects helped drive their support for Trump.
“It is an ambitious economic agenda that represents a renewed Democratic commitment to the hard-working men and women across the United States who have been left out and left behind for too long,” House Minority Leader Nancy Pelosi wrote in a Washington Post op-ed.
Among Democrats’ top agenda items is greater scrutiny of corporate mergers, including tougher standards that incorporate consumer privacy, product quality and the impact on wages and jobs. Democrats are also seeking post-merger reviews and greater enforcement authority.
Those responsibilities would be carried out by a new competition advocate that Democrats have nicknamed the “Trust Buster.” One of the deals that could be targeted is AT&T (T)’s $85 billion bid for Time Warner (TWX), which is awaiting regulatory approval. Other sectors that could wind up in the crosshairs include the beer industry, airlines and eyeglasses.
“We will revisit our antitrust laws to ensure that the economic freedom of all Americans — consumers, workers and small businesses — come before big corporations that are getting even bigger,” the document read.
Prescription Drug Prices: The plan would revamp Medicare by allowing the program known as “Part D” to negotiate prices directly with drugmakers.
“It is ridiculous that Big Pharma has controlled Washington for so long and has refused to even budge on the notion that we ought to negotiate for lower prices,” Sen. Claire McCaskill of Missouri said in a YouTube video outlining the platform.
The campaign would also expand apprenticeship and vocational programs, as well as establish a tax credit for companies that provide on-the-job training. Additional pieces of the broader proposal will be unveiled in the coming months, such as addressing the cost of higher education, infrastructure investment and creating a national family leave program.
In addition to Pelosi, top Democrats Sens. Chuck Schumer and Elizabeth Warren are slated to outline the campaign later Monday, laying the groundwork for the party’s message in the 2018 midterm elections and beyond. The rollout takes place in Clarke County, Virginia, part of a congressional district that Democrats have long fought to turn blue. It is represented in the House by Republican Barbara Comstock and won by Trump in November.
However, Democrats do not directly mention Trump in their strategy documents, though the campaign’s title clearly references the president’s signature book, “The Art of the Deal.” Resistance to the Trump administration has energized the party’s base, but Democrats are hoping to complement that with a more optimistic vision of the nation’s economic potential.
“In the last two elections, Democrats, including in the Senate, failed to articulate a strong, bold economic program for the middle class and those working hard to get there,” Schumer wrote in an op-ed in The New York Times. “We also failed to communicate our values to show that we were on the side of working people, not the special interests. We will not repeat the same mistake.”
DCG

I don’t care how much scrubbing, renewing and put on a new outfit -the [democratic] party is rapidly in decline; it has lost trust and credibility even amongst the loyals. It’s too late to roll out a new economic platform, why now? It is not going to happen, the party will remain stagnant unless young blood and NEW faces infuse trust, CREDIBILITY, and a move to the moderat center. Both parties are in need of a shake up to move forward.

When the dual allegiance/citizen traitor Schumer leaves this country for good, when the Congress isn’t asked to sign pledges of allegiance to Israel (aka Palestine), when we have Congressional term limits, when all of the dual Israeli citizens are no longer working and enriching themselves in government positions AND kicked out of the country, when ALL those working for the interests of Israel are listed AS FOREIGN AGENTS, when the Federal Reserve System is uprooted, and removed from our midst, when the income tax amendment to the Constitution is rescinded, THEN I’ll think about a “better deal”. THAT’S MY BETTER… Read more »

OMG, stlong….I guess you mean, when hell freezes over ??

Good. The more honest they are the more unelectable they become.

So, finally, they admit publicly and openly that the last 8 years of Obamanomics have been a disaster for our country? IMO, they are “advertising” for “BETTERING” what has been going on for the Obama years under their watch.

CalGirl . . . How could we possibly have faith in and believe whatever comes out of the mouths of the likes of Chuck Schumer? Obamacare was passed in the dead of night, with Ol’ Bag Palosi assuring us “we must pass the bill to find out what is in it.” When we found out that it was the transfer of wealth from middle class, hard working families, to MANY (not all) who have decided that their personal road to prosperity was to let John Q. Citizen pay his own way, and their way also. How could Schumer possibly think… Read more »

Any deals these pathetic slugs come up with will be a raw deal. What a pitiful, miserable campaign they have kicked off. ?
The good news is that, at this rate, there won’t be another Democrat president for a very long time. Hopefully, never!

Maryaha . . . I certainly do hope you are correct in thinking . . . “there won’t be another Democrat president for a very long time. Hopefully, never!” The big time screwing the American people took under Obummer should be enough to fill people’s memories for at least fifty years!

And we will have Trump for a second term, even better than the first!

Maryaha—IMO…maybe you are right (chances of another Dem POTUS) b/c I have observed that Obama not only “slew” his Republican and other opponents—-but he also disabled or “slew” even anyone from his OWN party (except HILLARY, whose main qualification was that she was the wife of a former POTUS—-who could compete with him as “head” of the Dems in his post POTUS years…..or Bernie—whom he discounted anyway) who had any ability whatsoever to succeed him. My husband and I have referred to this Obama Doctrine as “No one’s head could be higher than the KING’s……” We saw this bald spot… Read more »

Here’s the ugly truth. There is ONE party. They play at this “left/right”, Dem, Repug dialectic to preserve the impression that we live in a democracy. We don’t. Whether you have an (R) or a (D) after your name, you work for the same boss. All the rest is B.S.. Obongo was a sheep-dipped, homo, beach hustler. He was a Company product from the beginning. They taught him how to deliver talks that other people wrote and act like they were based on his ideas. They weren’t. He is so stupid that he actually grew narcissistic believing his own B.S..… Read more »

Trump has discovered that the swamp is actually a cesspool, where the Uniparty Congress is simply a collection of money-grubbing, self-serving figureheads. The clean-up must start with the Congress.
What’s clear is that all the battles we see are between various behemoth corporate/foreign interests, e.g. the military industrialists, financial giants, foreign national governments, pharmaceutical giants, unions, communists, NWO factions, etc. Regaining control starts with us, by firing the legislators who don’t represent our interests – which is just about all of them. Patriots have to stand up and be prepared to serve The Republic. Career politicians of all stripes stink.

filia.aurea . . . . . Excellently written, I could not agree more! Thank you.

filia.aurea, that’s why the republicans, starting with Paul Ryan (he isn’t genuine), don’t rally behind the president, they are cohooting with the demos because once the cleanup starts All inclusive will be marching out -their pockets no longer holding OUR MONEY and trying to find a real job, not the role of a lobbyist.

Too Little, Too Late, sucky Chuckie.
Time to order more hankies. You’ll be needing them. 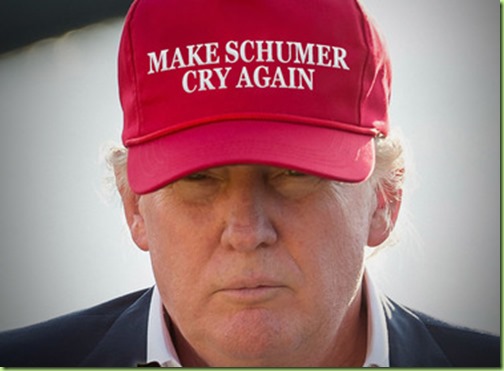 They expose their hypocrisy by creating a “new” plan, when they insisted on hanging on for dear life to their PRIOR one.

“…in hopes of winning over President Donald Trump‘s populist base with promises to take on big businesses, lower the cost of prescription drugs and create jobs.”
I guess since Trump is thwarting the influx of illegals & sending those already here back home, the Dems are loosing their voter base so they HAD to switch gears to focus on REAL Americans…
https://twitter.com/mitchellvii/status/889852241171099648

“Demonrats” on display! Could they be diverting attention away from their IT crook’s, Awan’s arrest while attempting to flee the country?

According to Newsbusters, the big networks didn’t even cover the IT crook story last night. The media working hard to prove why no one trusts them.