Citing an article in STAT (which requires a submission to read), Christina Prignano reports for the Boston Globe, Oct. 11, 2017, that Grubb’s Pharmacy in Washington, DC, said it has a cozy arrangement with members of Congress whereby it delivers drugs to their attending physicians so that the legislators can avoid making the trip themselves.
The drugs include prescriptions to treat the incurable Alzheimer’s disease, the most common form of senile dementia.
Grubb’s Pharmacy is located at 326 E Capitol St. NE, Washington, DC 20003, just a couple of blocks from Congress and the Supreme Court.

In an interview with STAT, Mike Kim, the owner of Grubb’s Pharmacy, said:

“At first it’s cool, and then you realize, I’m filling some drugs that are for some pretty serious health problems as well. And these are the people that are running the country. It makes you kind of sit back and say, ‘Wow, they’re making the highest laws of the land and they might not even remember what happened yesterday.’”

Under Congress’ health care plan, lawmakers pay just $600 a year for access to their attending physician, and by extension, the deliveries made by Kim’s pharmacy.
H/t FOTM‘s CP
There are three main phases of Alzheimer’s — mild, moderate, and severe. Each stage has its own set of symptoms (WebMD):
(1) Mild Alzheimer’s: This first stage usually lasts from 2 to 4 years. The symptoms include:

(2) Moderate Alzheimer’s: This stage can last from 2 to 10 years. The symptoms include:

(3) Severe Alzheimer’s: This last stage typically lasts 1 to 3 years. People in this phase may have some or all of these symptoms:

Below is a video of House Minority Leader Nancy Pelosi (D-CA) on June 25, 2017, which shows her looking gaunt and sunken-cheeked, struggling to communicate, gesticulating wildly and futilely with her hands, repeatedly stopping in mid-sentence and staring at the audience in brain freezes. (See “Does Nancy Pelosi have senile dementia?“)

Reblogged this on hocuspocus13 and commented:
jinxx?xoxo

I think as one ages there should be tests given to see the clarity of the persons mind. Not for everything but for things like holding a senate position, house position, drivers license or concealed carry permit. You know, things that would require a stable and clear state of mind.
How is it of no concern that we have people in office with potential serious brain diseases like dementia or Alzheimer’s. This should be mainstream news and anyone with a diagnosis of a brain debilitating disease should step down immediately.

I see. So this includes people who advise the Pres on when & what nation to bomb into oblivion, and draft new social policies to be enforced by the feral gubbmint on us all, equally under The Law, and so on, forever and a day. That’s a comfort, for sure!

While I don’t doubt that these types of meds are needed by the likes of Pelosi, I’m surprised the pharmacy owner would admit it. Sounds like that could be a violation of HIPPA, even though he didn’t give specific names. Not 100% sure…

“The HIPAA Privacy Rule regulates the use and disclosure of protected health information (PHI) held by ‘covered entities’ (generally, health care clearinghouses, employer sponsored health plans, health insurers, and medical service providers that engage in certain transactions)…. PHI is any information held by a covered entity that concerns health status, provision of health care, or payment for health care that can be linked to an individual.”
https://en.wikipedia.org/wiki/Health_Insurance_Portability_and_Accountability_Act#Privacy_Rule

Wow. Now we have proof that Congress is senile.

josephbc69
Reply to  MA in MO

I’m sorry, but did you write that you now had proof? I thought that the continual warfare state that came into existence from WW2 on to replace diplomacy was proof of that failed state of mind.

Reblogged this on kommonsentsjane and commented:
Reblogged on kommonsentsjane/blogkommonsents.
Heavens to Betsy – We require people in the military to be fit and pass a test to conduct our business – why doesn’t this same test apply to our officials in the government to pass a fitness test. If this pharmacy is supplying prescriptions to the Congress and Senate – I think an investigation is in order. No wonder our country is in a “mell of a hess.”
kommonsentsjane

Wow, the asylum really needs a cleanup. The swamp is stagnant, slowly but sure it is going through mass cleanup, old goat Conyers suddenly retiring, woohoo, Mcbrain getting ready to kick the bucket, fickle Nancy, latrine Waters, Ditch Mitch and Mexifornia Dianne are ready to vacate, they need to unglue from their seats and take care before Alzheimer gets a hold on them.

WAIT,wait!!!-Harry Reid’s not out of the line up yet,but he SHOULD be. We need to keep a close watch on whoever he chooses to carry on his Legacy of “Reverse Improvement Of America”.

Wow! This needs to go viral but of course it won’t.
Any 30 minute garbage show on TV has at least 6 drug commercials and the side effects alone are as bad as the condition itself. It kind of makes me smile that half of congress might be “suffering” from these side effects. Of course they should just RETIRE already and let someone who can actually function do the job! But that is a dream.

This is such a fabulous and timely article, Dr Eowyn, you have hit it out of the ballpark! I think there is no doubt that the majority of us, knew in our hearts and minds that any number of the sitting Senators and Congressmen and Congresswomen, do indeed suffer from the frailties that age wreaks upon the brain. There is no earthly reason why ANYONE with dementia, or other brain diseases should be making laws or judging the affairs of this nation. There should be a mandatory physical, along with physiological testing that should be done to qualify a person… Read more »

As you described with Drivers Licenses,don’t forget that the Gun-Grabber members of the Dumbocrats are STILL pushing for Dr’s to report any mental issues,however minor,to the Feds,which can result in The Government impounding a Legal,Lawful gun owner’s lifelong collection of guns just because he or she COMMENTED to their Doctor that they feel a little depressed since their Spouse died. That could happen even for TEMPORARY Depression! I think it’s being held off,but we all know it’ll just take ONE incident for them to force it into being LAW.

BTW-MY Doctor,God Bless her,refuses to ask any of her Clients if they own guns-she says,”That’s NOBODY’S business but THEIRS. If they wanna arrest me for that,I’ve had worse things than THAT happen to me.”

I despise Pelosi’s politics but I don’t see the pauses in her speech indicating one thing or another. I am concerned by her voting record and ill gotten financial gains while in office which are almost certainly criminal in nature.

I saw her making a speech a few nights ago trying to belittle President Trump,and she lost her train of thought three times and had to backtrack to find her place again. She also changed subject in mid-sentence. She’s definitely well into unravelling.

This is a very touchy subject;America has to respect THEIR rights as much as our own,yet since they’re writing the Laws and Policies that affect every American,we must hold them to a higher standard. And the higher that standard,the closer we run to the line where we infringe on THEIR rights. I think this would almost be a Supreme Court issue. Perhaps a petition signed by 2/3 of a person’s governing body (Senate,House,Committee…)could be used to have the person in question brought in to be interviewed and tested,and if found would be discreetly “Offered” the option of immediate retirement or… Read more »

Funny that most all of the dust-farting senile types in congress are mostly democrats – and I include John McCanus in that crowd. 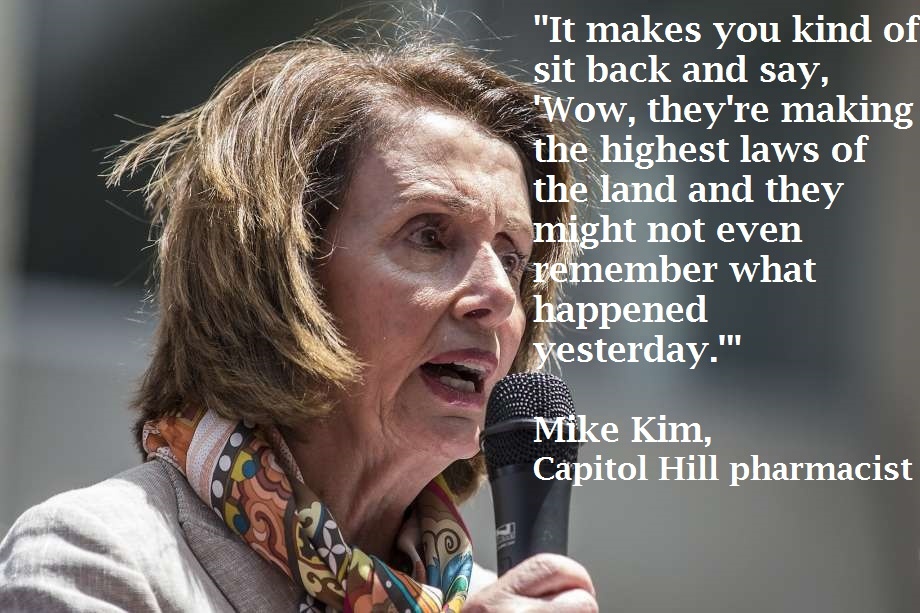 She can’t have dementia, her hair is the color of a teenager.

Well, with nearly the entire Democratic Party in office having been in their “dotage” for many election cycles….pretty sure Grubb’s Pharmacy is doing a booming business with not only dementia drugs…but every other thing they have to aid our aging population of Congressmen and Senators: ….viagra, anti-diharreals, digestion aids, thyroid replacements, dry-eye hydration drops, anything to do with cataracts or glaucoma, arthritis, bladder control….I’m exhausted just trying to remember what kind of list they might have to fill for these people. Grubb’s Pharmacy is sitting in the Cat Bird Seat, FOR SURE!

This means any addle brain can serve in Congress. Goes a long way in explaining some things.

Indeed, they have and are so doing as we speak, read, and write, even if they are increasingly unable to do so. Let’s face it: term limits are self-defeating in terms of someone doing good work. What we MUST do is to STOP RE-ELECTING these duds. However, even then we are saddled with a Constitution that tends to re-enforce the idea of two national parties, when the reality is that it is possible to have Constitutionally enabled proportional representation. The more points of view that are heard nationally, then the more likely major issues will not be ignored. But then,… Read more »

Reblogged this on disturbeddeputy and commented:
Certainly explains a lot

And of course the people pay for all this in more ways than one. It is a shame that when memory starts failing them and their functions are ebbing. They refuse to step down. We all suffer and bad decisions and votes happen.

Dr. Eowyn, What are they pumping into Joe Biden? His hand has a bruise from IV-drip - James Fetzer