Cop hater Kaepernick to grace GQ as "Citizen of the Year"

Well, guess he should be proud of this meaningless title. Yet I doubt it pays as well as a QB title.
From Sacramento Bee: Turlock son Colin Kaepernick — whose sitting (which quickly turned into kneeling) during the national anthem to protest police brutality sparked a movement — is one of the Men of the Year in the December issue of GQ magazine. His specific title is Citizen of the Year.
The article “Colin Kaepernick will not be silenced” notes that the former San Francisco 49ers quarterback’s determined stand puts him among athletes such as Jackie Robinson and Muhammad Ali who risked everything to make a difference.
Though the headline notes the Pitman High grad “will not be silenced,” Kaepernick is not interviewed for the article. “When we began discussing this GQ cover with Colin earlier this fall, he told us the reason he wanted to participate is that he wants to reclaim the narrative of his protest, which has been hijacked by a president eager to make this moment about himself,” the piece reads. “But Colin also made it clear to us that he intended to remain silent. As his public identity has begun to shift from football star to embattled activist, he has grown wise to the power of his silence.”
Kaepernick helped GQ assemble a 10-person team of his closest confidants, including filmmaker Ava DuVernay, rapper J. Crew, actor-activist Harry Belafonte and former 49ers teammate Eric Reid, who was the first NFL player to join him in kneeling.
Read the rest of the story here.
DCG

When I first saw this earlier today,I thought it must be a joke. How is he deserving? I see nothing positive he has accomplished except to divide this country and slowly dissolve the NFL. He must be proud.
Why not JJ Watt for surpassing the hurricane relief, over 36 million? Or the man walking across the country to raise funds or the Texan plumber that stopped a massacre from becoming even worse than it was. But, Kap, no way.
This is nothing but a political statement meant to divide. He is just another tool.

After I scheduled my post I found this: the editor of GQ, Jim Nelson, is a total proggie. He worked at CNN then in Hollyweird. Also from Wiki: Most recently Nelson launched ‘The Closer with Keith Olbermann,’ a twice-weekly web series offering political commentary on the 2016 election and other timely news topics. After garnering more than 75 million views[14] for ‘The Closer,’ Olbermann returned with a post-election series on GQ.com called ‘The Resistance’ where he continues the conversation about the President elect.
https://en.m.wikipedia.org/wiki/Jim_Nelson_(editor)

Well, that makes things a little clearer, doesn’t it?

The show should have been called “The Loser – Keith Olberman”.

What a travesty.
GQ, like Teen Vogue, is another Condé Nast publication. Wikipedia says “the magazine reported an average U.S. paid circulation of 824,334 issues per month, of which 609,238 were subscriptions. 73% of the readership are men, and 63% are single. 65% of readers had an annual income of $50,000 or greater; and 25% had an income greater than $75,000.”
A paid circulation of 824,334 issues per month is downright pathetic. FOTM has about half that number of unique pageviews a month, but FOTM has but a small team of writers — all unpaid volunteers.
#BoycottGQ !!!

They must be trying for the “Saul Alinsky” award.

May God Bless each and everyone of the UNPAID writers for FOTM. There is no great gift one can give than the gift of self! Each of those who write as an act of charity towards the rest of us, truly gives of themselves to us. “Thank You” doesn’t quite seem enough praise under these circumstances.

Most of GQ’s readers are girlie men like Keith Olbermann. Colin Kaepernick is their hero because he’s a cry baby just like them. Conde Nasty is just another America-hating corporation whose goal is to destroy this country from within and without. Boycott anything Conde-Nast!

I love your descriptions, “girly men”, ha, ha. Like that one on MSNBC that follows Ritchie Madcow. He alway sounds like he’s on the verge of tears. If this were the 19th century they’d have him strapped to a machine for “female problems”.

Heeeeeelp!!! I can use that Brillo to clean the bird caca on my porch floor! Hehehe…….

Yo, Colon, Angela Davis wants her look back…

MomOfIV . . . Amen to that sentiment! I wish Kap would get over his 15 minutes of fame, and drift off into the sunset . . . never to be heard from again.

It’s always disgusting to see how well manipulation works. They are working overtime to sew hatred and collapse the world. They have a retreaded ideology to replace it. It comes in a Little Red Book.

GQ’s definition of what it means to be a good citizen and a good man and a hero is a bit puzzling.
They seem to believe the epitome of manhood is taking a knee. But I say the true measure of a man is taking a stand. […]
GQ should’ve named Colin Kaepernick its ‘Coward of the Year’
https://www.foxnews.com/opinion/2017/11/13/gq-shouldve-named-colin-kapernick-its-coward-year.html

Praise the Lord and pass the ammo … 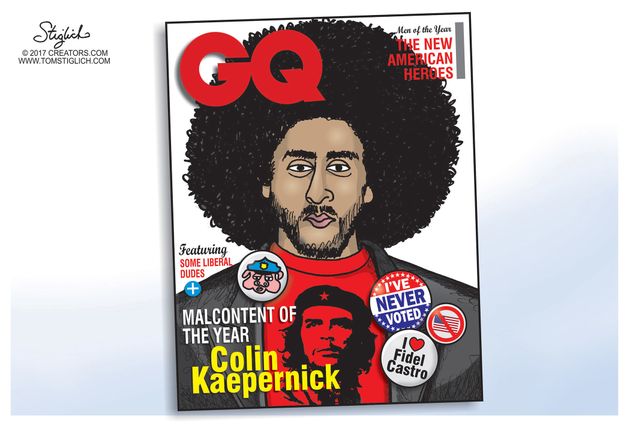 To my knowledge, he has never worn a Che shirt nor did he express his love for Castro.

Guess Kaepernick hates Castro so much he had to wear a t-shirt with Castro and Malcolm X on it. 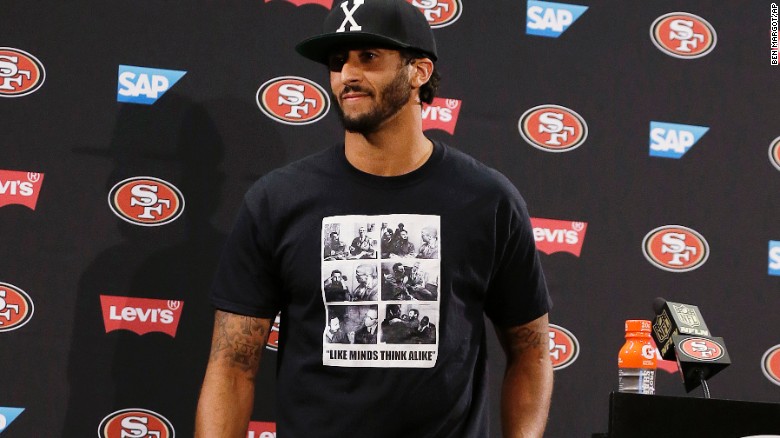 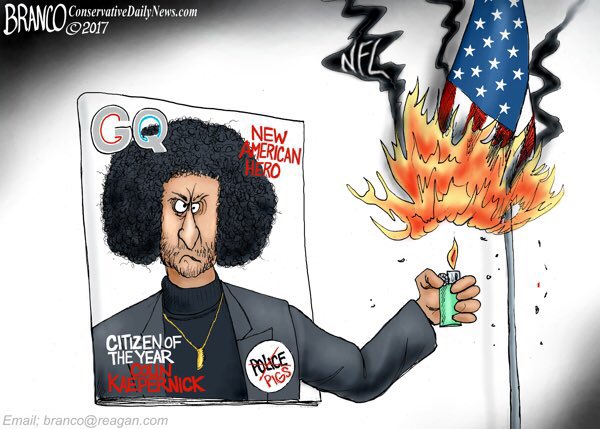 He never set fire to the flag. This cartoon is misleading.

The cartoon is satire. What’s not misleading is his disdain for cops.

He has a lot of courage and conviction. That is for sure.

Yep. Takes a lot of courage to turn down a contract then claim to be blacklisted.

If he turned down a contract then he claims to be blacklisted then that’s on him. 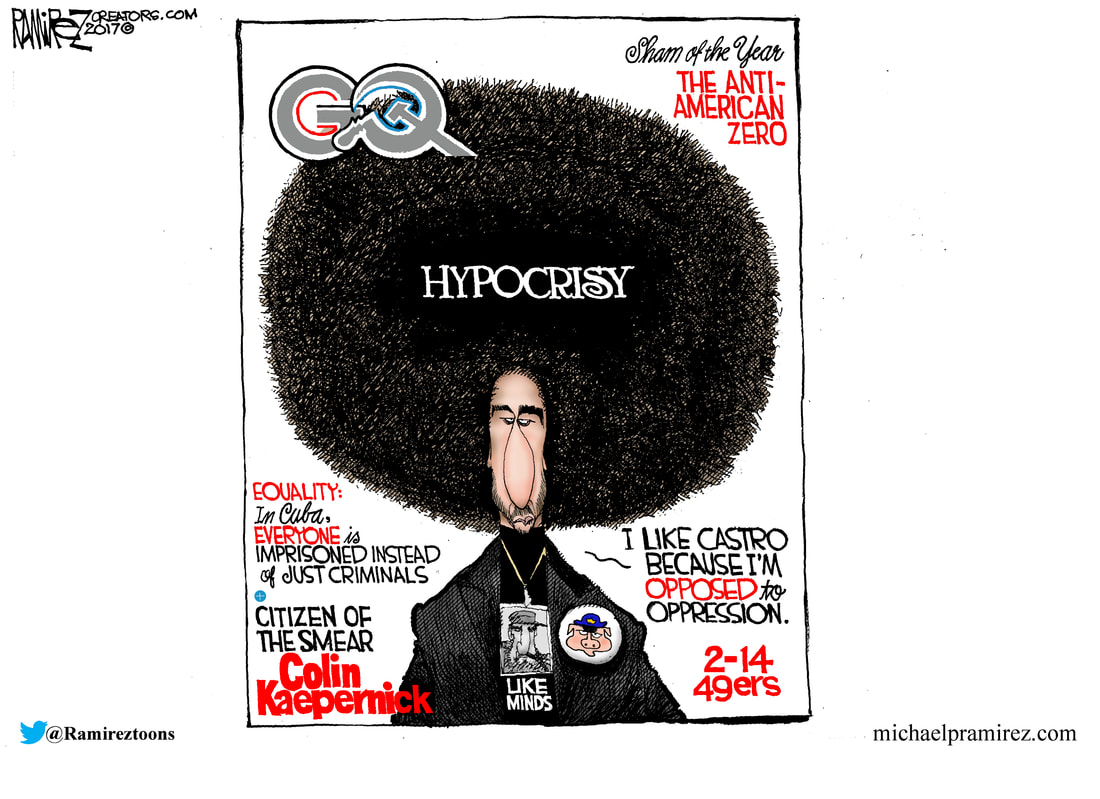 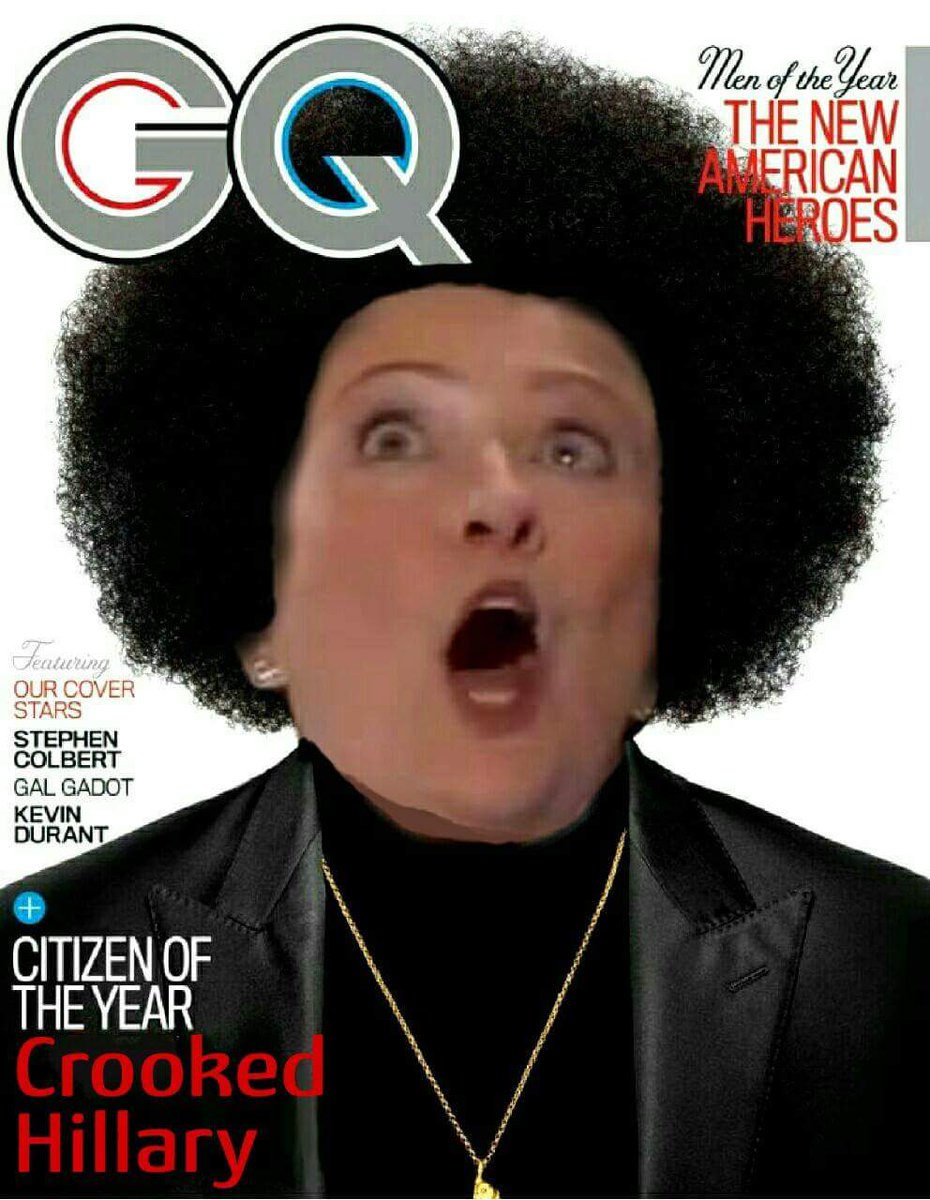 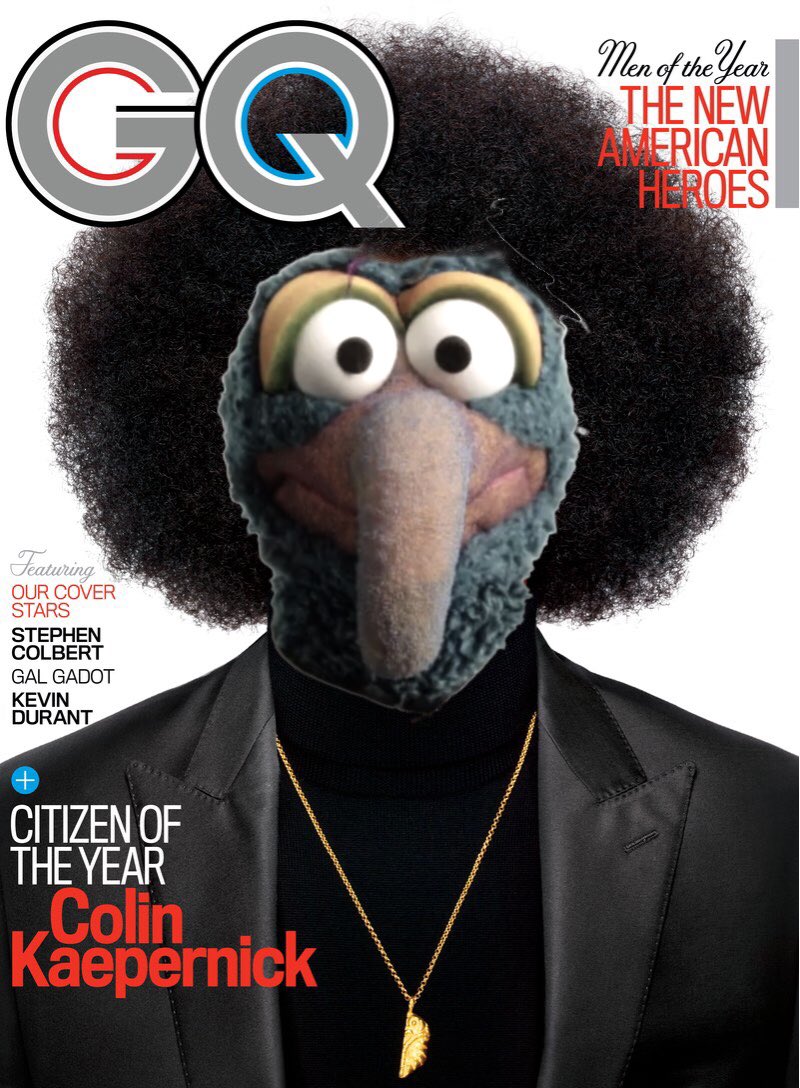 GQ “Jumped the Shark.” Must be desperate for patrons.

A year from now, when all this is ancient news, he’ll still be broke, bagging groceries at the Circle “K” and trying to get people to listen to his story about how he was run out of professional sports because he was black. What a loser.