I’m not trying to be funny.

A man claiming to be James Holmes created a profile on a popular sex website just days before “The Dark Knight Rises” massacre … in which he described his penis as “short/average” … and law enforcement sources tell TMZ investigators are now looking at the site to determine its authenticity.

“Holmes” created the profile on AdultFriendFinder.com July 5 — and included a picture of himself with reddish, orange hair … just as officials in Aurora, CO said he looked when he was apprehended Friday morning.
“Holmes” — who used the screen name classicjimbo — included a cryptic message on the top of the profile which reads, “Will you visit me in prison?”
In his profile, “Holmes” says he’s 6’0″ and single … with an athletic body.   Note — the FBI says Holmes is 6’3″.
“Holmes” describes himself as a “light/social drinker” … but in the section where he’s asked if he smokes or does drugs, he answered, “I’d prefer not to say.” 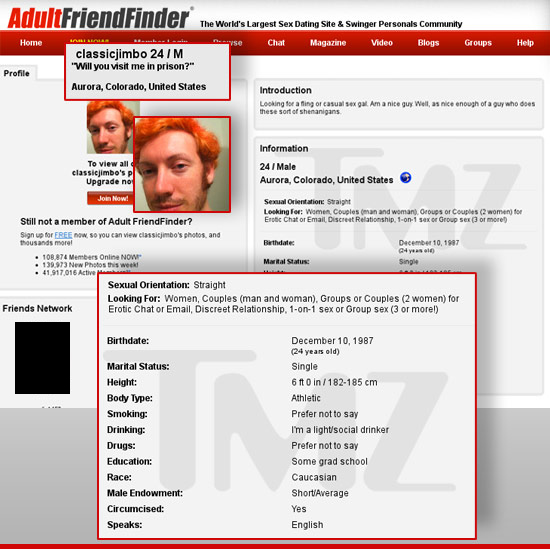 Photo on left is the one the media released of suspect James Holmes. Photo on right is the “James Holmes” on the sex website.

Meanwhile, New York Daily News reports, July 21, 2012, that a remorseless James Holmes is jailed in solitary confinement to prevent other inmates from attacking him.

A jail employee told the Daily News: “Let’s just say he hasn’t shown any remorse. He thinks he’s acting in a movie.”

Two just-released inmates said the concerns of Arapahoe Detention Center officials over Holmes’ life were well-founded.
Wayne Medley, 24, said as he left the facility, “All the inmates were talking about killing him. Everyone was looking for an opportunity. It’s all they could talk about.” Freed inmate Dima Danilov, 22, said that if Holmes was released into the general jail population, “he won’t live to see Monday’s court appearance.”
Another released inmate said Holmes’ behavior behind bars was increasingly irrational: “He was spitting at the door and spitting at the guards. He’s spitting at everything. Dude was acting crazy.”
Sure looks like demonic possession to me….
See also “Who is Colorado mass murderer James Holmes?”

With any luck, Holmes will suffer the same fate in prison as did Jeffrey Dahmer.
After all, I define “justice” as when people get what they deserve.
As such, whoever ultimately winds up administering same is totally irrelevant.
-Dave

Looking for group sex? Messed up…

Ok I must admit your headline caused me to do a double-take like in the cartoons. And until I learn more about the guy I’m still not ruling out Manchurian candidate-related stuff, just my suspicious nature I guess. Nothing but a traffic ticket until recently??

Reblogged this on News You May Have Missed and commented:
Colorado mass murderer James Holmes has a small penis

People should focus on using their God given ability to help other people, and not hurt them or put them down. If we could all do that, the world would be a better place and people would be less likely to misuse their abilities. An idealistic idea, yes. Pick something good to do. Do the best you can. Enjoy the process of trying. Something to be practiced if your going to make it a reality.
Hope

Preach that to the criminals Steve. And hope you don’t have to face the reality of dealing with evil people. Hope

Well those were the days when you just needed a big stick…now, unfortunately, it’s a knife or gun. Since all the criminals forfeited their weapons and all/ snark

Better yet Steve… Go to the sandbox and preach your message to the young Muslim boys that strap on bombs and cut the heads off of infidels. You know, the ones they then use as soccer balls? I’m sure your message of “hope” will be well received…

Too much fore-planning for an insanity defense. Holmes planned the massacre for weeks — buying guns from a local gun store; purchasing ammunition, explosives, and military gear by mail order; meticulously setting explosive booby traps in his apartment. Those are all marks of a rational sane man, albeit an evil psychopath.

Justice is not about getting what you deserve. Where I live, a doctor killed his 2 daughters. He is free in society. Justice has decided, since the doctor is a cardiologist, if we put him in prison, we could get 100 deaths of heart disease in the next 10 years. He killed 2, but justice says: stopping him could lead to more death. Fair and square, asshole.