The delusion is strong with this one.

With a smug look on his face, Lemon rhetorically asks:

“What is it about President Obama that really gets under your skin? Is it because he’s smarter than you, better educated, made it on his own — didn’t need daddy’s help — his wife is more accomplished, better looking? I don’t know? What is it about it? That he’s a black man and is accomplished and became president, and he punked you on the whole birth certificate thing. What is it about him? Just wonderin’.”

But then, this is the same Don Lemon who, last August in the Hamptons, stuck his hand down his shorts, “vigorously” rubbed his penis, then shoved his penis-smelling fingers under a bartender’s nose.

Actually, since Lemon is openly homosexual, we can hardly expect him to find any woman attractive. In saying that “Big Mike” Michelle is “better looking” than Melania, Lemon was merely recognizing a fellow LGBT, as in transvestite.

See “Michelle Obama is a man: See the junk moving in his pants”

Lemon is gay! Of course he thinks Mike is better looking than Melania! LOL! Duh!

Comparing Melania to Mooching Moochelle is like comparing a Ferrari to a dump truck.

Good analogy,but I would have used a Garbage Truck-more in keeping with “his” character

I think Don Lemon’s gerbil has messed up his optical nerves. Michelle Obama looks like something Frank Buck would have thrown a net over and offered to a carnival for their freak show!

Coming from Don Lemon, this lends credence to the theory that Michelle is indeed a man. After all, Barry calls her Michael. This may come as a surprise to Don, but men like various kinds of women and of course white men are more attracted to white women, black men to black women, and gay black men to gay black men like Don. I think Melania is very attractive. I think the fake bazongas are a little much, I think natural women are much more beautiful but she does come from an industry where plastic surgery is the norm. I… Read more »

We have to remember,this is DON LEMON we’re talking about-pretty far from ANYTHING resembling good taste….

👆👆 Big Mike towering over Sarah Jessica Parker in that get up..(where did she pick up those size 14 Stiletto whore boots is the real question ) this me laugh/cringe every time I see it🤣
Don Lemonhead is the dumbest man on television, Trump was right about that!

“Let me show ya baby. That ain’t no woman, it’s a man, man!”
https://m.youtube.com/watch?v=DofxovZWoqo

And this is the best they got;..a bastard born muslim faggot, obama, who ain’t a natural born citizen of any where, and his tranny.

Only the ignorant, traitorous liars, or cowards,….referred to obama as president.

Well, one thing is now for sure, Lemon is blind as well as stupid

Comparing Big Mike (Michelle Obama for those in Rio Linda) to Melania is like comparing a dump truck to a Ferrari! There’s no comparison at all in the looks department. As for intelligence, Melania is anything but dumb. One, she speaks FIVE languages-five! Secondly, Melania was slated to attend architecture school prior to being discovered. The rest, they say, is history. Now, even though Don Lemonhead is openly gay, why can’t he simply acknowledge that Melania is beautiful? Don’t people the world over think that the Mona Lisa is beautiful? Even though he may not be sexually attracted to Melania,… Read more »

Melania is beautiful, serene, radiant, poised, and highly intelligent. Long may she live (and happily)! Thank God for Melania….

Hey Lemon, it’s been said that (Michael ) has more balls than you!

In addition to being an idiot, lemon is blind.

Hmmmmm, Lemon is off of his rocker. Michael is ugly as a man and to ugly as a woman. He looks and dresses like a sewer rat.

I would have thought Ru Paul was more Lemon’s type of girl, but…

Typical of lemon finger. In his mind the tranny Big Mike is better looking, but then again he sux caulk.

Mike Robinson was recruited by CIA types from the Oregon U.

It’s just not fair. I think Africa needs its smarter, better-looking people back; let’s make that happen for justice!

I’ve run that thought through my head in several different ways, and it always comes out… CRAZY!!!

Not sure if this link will work: 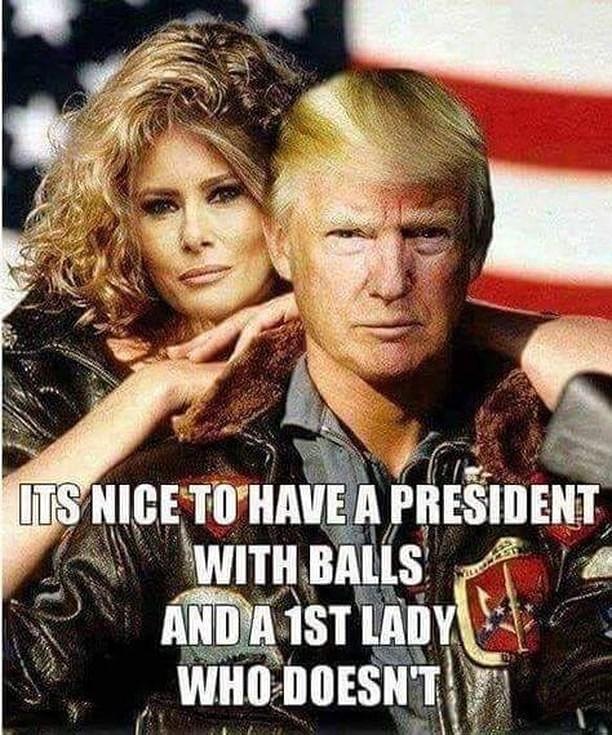 OK….I just want to respond to this post as I first felt instinctively upon seeing it: when I was a kid growing up with my ethnic (one historic side of family) Germanic night-time “bed-time stories” in Pennsylvania, had I seen this, I would not have slept a night for YEARS, thinking that the “Michelle Obama Giant Ogre under the bridge” was coming for me at night out of a Germanic fairytale—– Now, in all fairness, I understand this photo dredged up childhood memories by comparison of the giant and inelegant “Michelle” Obama to a much smaller person. However… psychically, you… Read more »