On Wednesday, Feb. 22, President Trump revoked Obama’s May 2016 decree ordering public schools to allow “transgenders” to use the bathrooms matching their imagined gender, which meant biological males could use girls’ bathrooms.
In so doing, Trump is honoring the Constitution’s 1oth Amendment on states’ rights by returning the matter of access to public bathrooms back to the jurisdiction of the states.

Responding to a tweet asking “What do you tell a 12 year old girl who doesn’t want to see a penis in the locker room?,” CNN anchorman/journalist Chris Cuomo @ChrisCuomo replied:

“I wonder if she is the problem or her overprotective and intolerant dad? teach tolerance.”

As you can imagine, Cuomo’s tweet generated a furor on Twitter, to which he responded by doubling down:

In response to twitterer Bonnie who raised the issue of predators taking advantage of transgenders having access to girls’ bathrooms, Cuomo wrote: “Because you keep being told to be afraid of a risk that is unsupported by fact”.
In response to Beks who tweeted that “All kids comfort needs to be considered,” Cuomo wrote: “Comfort is not the issue. Equal protection under law for accommodation is. ‘What you like’ is not a legal standard” .

So Cuomo thinks our concerns that perverts would exploit Obama’s tranny bathroom decree are “unsupported by fact”? And he calls himself a newsman/journalist? See:

I am in disbelief at Cuomo’s statement. He is paid $2.5M per annum to spout his drivel, – outrageous. Rumor has it that he and his wife of 14 years night be close to divorce. It is also rumored he may “come-out” as gay at the end of it. As a father of three children, he seems to have abandoned all sense of decency. There are already many cases of harm this idiotic rule has caused: Laws and policies allowing men open access to private spaces designed for women puts women at risk of attack. Increasing publicity will make women… Read more »

I don’t go to all day events any more due to the fact I would find some male in a restroom I would be using. This tranny everything is way out of control.

The transgender narrative is unnatural, It is simply a ploy in the cultural marxists’ handbook. Now parents who promote children as transgenders are going to find out that the medical profession has condemned the practice as child abuse. 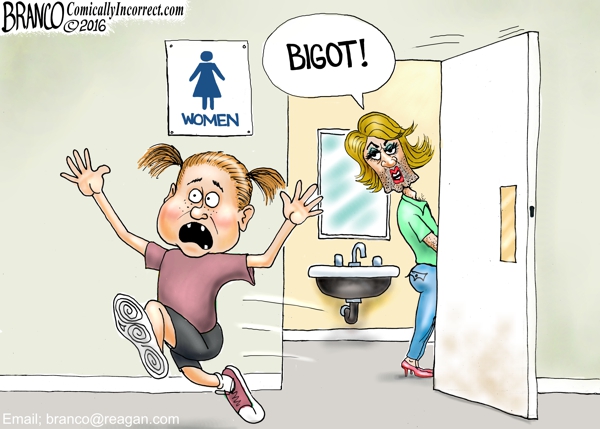 Plus a more recent cartoon in response to Cuomo: 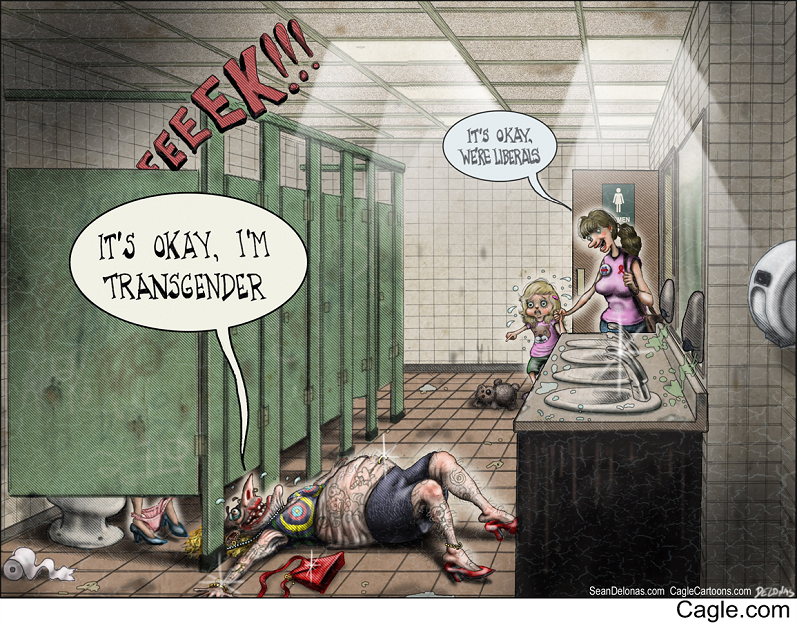 Apparently raised on pizza, and what ever bizarre condiments.

I have not heard any outrage about the possibility of females going into the men’s bathroom thinking they are male, does this mean it isn’t possible? I am serious, these crazy, satanic, psychopathic cultural Marxists sometimes do confuse me. Meanwhile I wait for Jesus.

I have read where females have gone into male restrooms. It seems men don’t mind the females in their private space. Go figure. Where are the morals?

Watch it,Bro-Pizza is GOOD FOOD. Just not THAT pizza…..

The Men’s Room isn’t considered as much a “social location” as the Women’s Room. Guys rarely even speak to one another in there,and there’s not likely to be any sort of eye to eye contact;in THAT respect,I think Women are much more civilized…

Cuomo obviously gets it naturally. A liberal progressive from a liberal progressive family. What would one expect?
And ‘come out as gay’? Gay is an aberration and softening for the term HOMOSEXUAL. Please call it what it is.
It is just one more manifestation of multiple mental problems.

I do not support violence against any group including LGBT. However, transgender person’s are apparently being told that they are the opposite sex by the MSM, their doctors, and everyone else in the establishment. Incidents like this one are shoving their reality defying “beliefs” down people’s throats. The article mentions state’s rights which is spot on. However, this “cognitive dissonance” between what the TG’s believe, and, how they are perceived can lead to dangerous results. The murder rate for TG’s is a pandemic. Perhaps, this is due to their psychiatrists, and other “professionals” insisting that they are, what others can… Read more »

https://www.youtube.com/watch?v=9bDCOSPMG1o&feature=youtu.be
Those Cuomos are really bad news. Here is Mario Cuomo spewing lies. This video was “truth-bombed”. Notice the thumbs up/down and the comments.

Maria Cuomo that is.

Who is Maria Cuomo?

https://www.courant.com/entertainment/movies/hc-newtown-movie-screening-0927-20160926-story.html
When I originally saw this, like the above article they claimed she was the sister of Chris Cuomo. If not, I guess she’s just a satanic minion.

Kim Snyder — tool of the intelligence services. Snyder stated there are “28,000 Newtown residents who were traumatized in one way or another by this.” NOooooo, the aim was to traumatize the American people with this. Newtown and their Potemkin Village lottery winners are doing ok. AND, the American people are to be reminded (again and again, as Snyder makes clear) that questioning the official and AUTHORIZED narrative is akin to that perennial and awful bugaboo, ‘holocaust denial’ and ‘9-11 conspiracy theorists’. And it denotes a ‘mental imbalance’. Oh NO!! Say it ain’t so Ms. Snyder! We look to you… Read more »

Any person, male or female, who defends any sort of pedophilia IS guilty of doing that very thing themselves. I, like God, have no mercy for this kind of thinking and behavior.

I wonder why all the femi-nazis are completely and utterly silent on this issue? Aren’t they supposed to represent the rights of women and girls to be safe from all those bigots/chauvinist pigs, also known as “men”? Oh wait, I forgot ….it’s about accepting perversion as normal, not protecting women’s “rights”. ? Silly me……

Maryaha . . . that is an excellent find. If I had children in any school system, I would put them on notice by providing a copy of this excellent letter. God Bless you for sharing this with others.

what a great find! I’ll be send this link to a lot of folks.

Keep it up demorats…they must want four more years of Trump.

Fake News peddler and nepotism poster boy Chris Cuomo apparently decided that the emotion of the transgender bathroom controversy was more important than common sense and the safety of little girls (his included)…
CNN Anchor Chris Cuomo Caught With His Pants Down on Transgender Bathroom Issue
https://www.americasfreedomfighters.com/2017/02/24/cnn-anchor-chris-cuomo/
Chris Cuomo received a lot of backlash for his tweet so he tried defending his position by saying that he has 2 daughters.
https://www.thegatewaypundit.com/2017/02/cnns-chris-cuomo-suggests-12-year-old-girls-problem-dont-want-see-males-genitals-locker-rooms/
And in case you missed it…
Cuomo absent from CNN after transgender comments
https://www.washingtonexaminer.com/cuomo-absent-from-cnn-after-transgender-comments/article/2615660

Recall the story of how Hillary (in ’75) defended the rapist of the 12-year old girl, saying the girl had led the man on and actually wanted him to have sex with her. Like minds… https://www.washingtonpost.com/news/fact-checker/wp/2016/10/11/the-facts-about-hillary-clinton-and-the-kathy-shelton-rape-case/
And if the left actually did come to the point of defending pedophiles, or necrophiliacs, or bestiality, and introducing laws to force it on all of us, aided by pressure from the media and sports-entertainment celebs, and activist judges, would it really surprise us anymore?

The Blowmo family….the family that blows together stays together, I guess.

Just saying…from the “front lines,” as a Middle School Teacher….when I question “my girls” who pester me to spend lunch and breaks in my classroom (which means I DON’T GET A BREAK or restful LUNCH b/c I “cave” in sympathy to them)…”Why are you here…why don’t you go to the bathroom, eat lunch with friends?, etc……” And the reply is invariable…”I don’t USE the school restrooms……..(& therefore, I don’t eat lunch outside either, b/c I just want to come to YOUR room & be “safe”). None of this came up PRIOR to the Obama bathroom rulling. But it is rampant… Read more »

Thighing: Pedophilia makes allies of Islam and the Left – pennine_rainbows

“Because you keep being told to be afraid of a risk that is unsupported by fact” – interestingly that is the very thing Libtards are doing in regards to Trump…. he MIGHT do something awful sometime in the future, therefore we will do whatever it take to get rid of him! Good job Libtards.

[…] Cuomo is truly a sick individual and an OBVIOUS globalist […]