From MSN: A new Massachusetts law that prohibits discrimination against transgender people in public restrooms is “punishing” the protected religious speech of churches and pastors, a conservative Christian organization claims in a federal lawsuit filed Tuesday.
Alliance Defending Freedom (ADF), based in Scottsdale, Arizona, said it sued on behalf of four Massachusetts churches to protect their right to operate their facilities “in a manner that doesn’t violate their core religious beliefs.” The lawsuit names Democratic state Attorney General Maura Healey and members of the Massachusetts Commission Against Discrimination as defendants.

The law, which was signed by the governor in July and went into effect in October, bars discrimination against transgender people in public accommodations. Among other things, it allows individuals to use the bathroom or locker room that corresponds with their gender identity.

Healey has found that churches are places of public accommodation.
The ADF contends in the lawsuit that churches would be forced to open changing rooms, shower facilities and restrooms based on perceived gender identity and not on biological sex. The groups says because the law also prohibits covered entities from making statements intended to discriminate or to incite others to do so, Healey and the commission “also intend to force churches and pastors to refrain from religious expression regarding sexuality that conflicts with the government’s views.”
“Neither the commission nor the attorney general has the constitutional authority to dictate how any church uses its facility or what public statements a church can make concerning a deeply held religious belief, such as human sexuality,” said attorney Steve O’Ban, senior counsel for ADF.
A spokeswoman for Healey said her office is reviewing the lawsuit.
“We are pleased that we finally have a law in place that protects transgender people from discrimination in public places. This law is about civil rights and is critical for people who were without full protection and equality under the law for too long,” said spokeswoman Jillian Fennimore.
An assistant to the commission did not immediately return a call seeking comment.
The lawsuit asks the court to suspend enforcement of the law against the churches while their lawsuit proceeds. The churches suing are Horizon Christian Fellowship, in Fitchburg: Abundant Life Church, in Swansea; House of Destiny Ministries, in Southbridge; and Faith Christian Fellowship in Haverhill.
DCG
Please follow and like us:

Please might someone tell me exactly what is transgender besides it being a social construct? Surely it is impossible to trans a persons brain gender simply by wishing a delusion become reality. I can understand that a post operative transsexual and/or an intersex might have a legitimate need to use the private facilities in tune with their acquired SEX but how does that relate to a man in full possession of his birth genitalia, cloaking himself in female garb, being allowed to INVADE areas thought to be safe from the prying eyes of a crossdresser, which is the overwhelming majority… Read more »

Lynn . . . you are right on the money! I never thought I would see the day that our government would force situations on us that could in reality be dangerous to members of our society. This may very well cause “bathroom brigades” wherein groups of women go into restroom facilities so that some can “keep watch” while other’s take care of their business, and then vice versa. If a female cannot be safe in a women’s restroom, locker room, shower room, changing room — then there is no safety.

Nope, it’s pretty much wishful thinking made into a right by progressive left/liberals in order to advance their way of things.

I suppose another way of keeping people safe . . . is the restroom, etc is kept locked, and one must apply to some authority to use the key to the restroom. This would/should keep the use of the restroom to one occupant, or group at a time.

Auntie, I really do not wish to be an antagonist but what you suggest would be more costly than creating a single use bathroom which is now provided in many businesses. A salaried employee over time would be more expensive than simply installing an inside lock for a bathroom. But then that asks the question? What about locker rooms or multiple use showers? How many keys would need to be provided to secure our safety?. I have used these single use bathrooms and find it disgusting that I have had to clean the toilet seat from urine deposited by a… Read more »

lynnmccrann . . . when I wrote the above, I was specifically thinking about the situation in churches, not necessarily business establishments. As far as I know churches on the whole do not have the excess of money, nor have they ever thought they had the need to install “single use restrooms.” I would suppose with the passage of time, some bonehead will start going into various churches to “test the waters” so to speak. How many people in this land who attend church (of any denomination) wants to feel that they are in a space that may not be… Read more »

It’s hard not to be discouraged by the bathroom insanity. I guess all the “normal” people will have to revert to what their mothers told them as kids, “Be sure to go to the bathroom before we leave the house.” :-/ I hope the churches win their lawsuit!
In other disgusting “Babylonian” news meant to usurp normalcy, Cover Girl has become Cover Boy, gahhhhh!
https://twitter.com/HenryMakow/status/786051624011567104
I suppose those “guys” will begin demanding bathrooms with lighted makeup mirrors!

I bet they won’t force ‘transgender bathroom law’ to any islamic facilities. But anything…anything that against Jesus and His Church is approved.

The people who said that gender is a social construct and unimportant are the same people that said anyone can be any gender they identifies with. Their way of thinking is very contradictory, no wonder they become nut.

I think, tukulusriantei, that such people were already mentally disturbed or unbalanced BEFORE declaring their sexual ideology.

Massachusetts attorney general wants this, but not AR-15s– funny, there’s a right to bear arms but not to unrestricted bathroom choice in the Constitution. 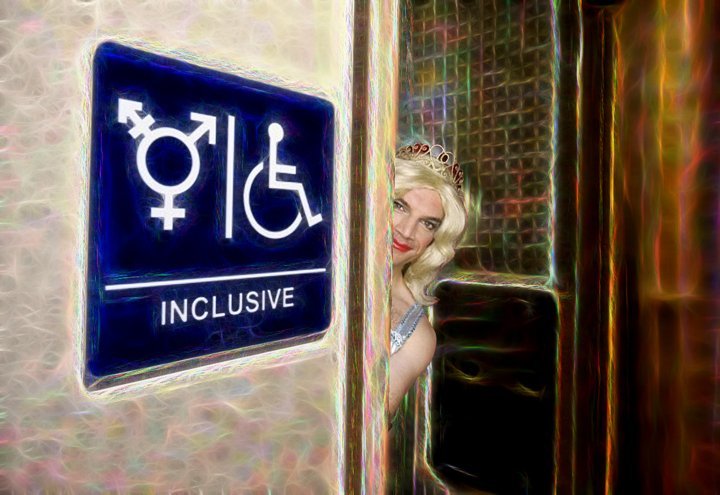 Pretty much if I were a public entity in these enlightened days, I’d demolish my restrooms (or remodel them into offices) and put up port-a-potties in the parking lot. This would avoid ALL STOOOPID lawsuits and whatever.

CalGirl . . . you have a very valid point there. Although, I supposed some bonehead would sue because “raindrops fell on their head” as they were on their way to the facilities, and after all the business establishment is responsible for keeping one dry during a shopping expedition! It truly is crazy with all the problems our nation faces that the bathroom issue has even crept up.

It isn’t ‘crazy’ Auntie. It’s planned.
The link below is the outline or the forerunner to a book titled:
“After the Ball — How America will conquer its fear and hatred of Gays in the 1990s”. (Plume, 1990), ISBN: 0452264987 – authored by Marshall Kirk and Hunter Madsen
The title of this article is “The Overhauling of Straight America”
https://library.gayhomeland.org/0018/EN/EN_Overhauling_Straight.htm
The agenda is not an accident.