Bound to happen when you allow “transgender” customers to freely use whichever bathroom suits them.
From Chicago Tribune: Chicago police issued a warning about a man who exposed himself in front of a child in a women’s restroom in a Target store in the South Loop neighborhood.
The incident happened around 4:05 p.m. March 25 in a Target store in the 1100 block of South Clark Street.
Police said a woman was watching her child in a restroom at Target when a man entered insisting that he needed to use the restroom. He pushed his way into a stall where the child was and exposed his genitals before fleeing the scene.
He was described as black with a dark complexion and between 30 to 40 years of age. He is between 5 feet, 10 inches to 6 feet tall and weighs between 170 to 190 pounds. He was last seen wearing a red jacket, a dark colored hat, gray pants and sunglasses, police said.
Anyone with information about the incident should contact detectives at 312-747-8380.
See also:

Don’t say we hadn’t warned ya.
That woman should be charged with child abuse for bringing her child to Target and using the store’s all-gender rest room.
#BoycottTarget

Amen Dr. Eowyn!
I have been boycotting ‘tarjay’ ever since they went PC

The best boycott is to not shop there at all, hurt them in the cash register.

It looks like their social experiment can now be deemed a failure. No one wants to put their child through such stress from going shopping. Heck we have stalkers working in pairs at these big stores, one to follow the child and then sending pictures to the grabbers outside. Going outside the home has turned into a battle ground on several levels.

“He pushed his way into a stall where the child was and exposed his genitals before fleeing the scene.”
if my child was using the bathroom and some perv walked in, he would not make it past my foot to get to my child….period.

MomOfIV, a good kick in tha balls (sorry) would be the perfect blow!

Alma, I suspect you would have collected a new “MoJo Bag”.

Too bad that mom didn’t have a Taser, she could have have had a barbequed hot dog.
Good thing at least the child had their mother with them, too many parents let their young children go into public bathrooms alone- where I grew up the library had a downstairs bathroom (and the police station was in the building too!) and a young boy about 10 or 12 years old got sodomized by a 19 year old kid that followed him in there.
You do have to watch your kids even more these days.

Hold the Target CEO responsible for incidents attributable to their bathroom policy.

Disgusted . . . I would say this is the very best kind of solution to this problem! Since this chain of stores decided to go PC because they were chasing all kinds of money that the LBQXYZ, who crowd would no doubt spend in their stores. It is more than fitting to tie Target up in our courts, expend the time and energy in having the little girl go into therapy to ensure that she does not bare the scares of trauma for the rest of her life . . . all these expenses should be paid for by… Read more »

White Gentiles have become too civilized, brainwashed by “guilt propaganda” against them by our predatory, genocidal rulers’ media. At the inner-city high school where I taught for decades I always marveled how little bumping and shoving occurred during passing between periods and how few girls were harassed sexually. Any violation of politeness and decency was immediately and violently punished by the brothers and cousins of the the victims. Black male students became impeccable gentlemen after such responses. Even female friends and relatives became involved. When one middle-aged Hispanic security guard made advances toward a thirteen-year-old coed. He was quickly surrounded… Read more »

Gary . . . . That was a great addition to this discussion. Thank you. There is little doubt that “society at large” should be the watch guard of inappropriate behavior. When I first read this article, the very first notion to pop into my head was . . . . some very concerned “Fathers” (which would include fathers, grandfathers, male cousins, brothers, sons) in this community should catch and beat this perpetrator to a bloody pulp, so that if he ever again in his lifetime thinks he would like to get his thrills from displaying his junk to a… Read more »

It’s going to have to come down to street just-us.

stlonginus . . . . In times of old, that was precisely the method used to keep weirdo’s in line. I believe that it was rather effective. Now a days, we arrest, perhaps give them a ticket to appear on some future date, pay for these cretins to have legal representation, perhaps if they are sentenced to jail time, the poor taxpayers have to pay to guard, food, medicate, and house them. The method you have proposed, by-passes all the nonsense, and expense which must be born by the taxpayers . . . it puts the responsibility upon the head(s)… Read more »

“What’s that screaming noise?” “Oh, just another pervert in the bathrooms I suspect”.

Who’s that? Who knows? 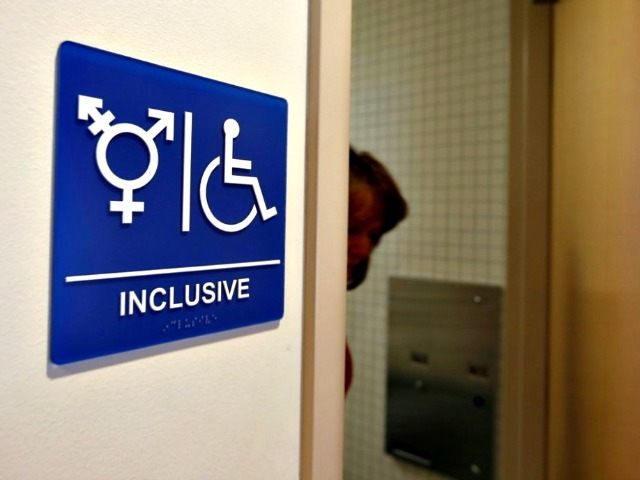 Don’t they sell scissors at Target?

Too bad this coward was so ‘fast on the draw’, when this stuff happens it’s so quick you barely have time to register it and then they’re gone. if he wasn’t so quick the mom could have gotten a good kick in at least! I guess the message is, for Target (does Walmart have this policy too?) is carry a can of EZ off oven cleaner if you’re forced to use the restroom. And, be very wary of anyone who seems to be ‘hanging around’ the outside of the restroom. People have to stop paying attention to their dumbphones and… Read more »

Stick to Internet shopping as much as possible – particularly if you have children.
It’s easier, usually less expensive, and always safer – even if you have to order from companies you don’t exactly like.

There’s a lot of wisdom to that. Besides the captive breeding program for weirdos, there are the fraudsters who are always looking for a new venue. I think it wise to avoid crowds at any event.

“I’d like a sharp pair of tin snips and a bag of rubber bands, please”.

Target, if they really want to be inclusive, should just get rid of the partitions – no privacy for anybody. Force their clientele, to experience cultural divershitty.
Wrigley Field, used to have troughs for men to urinate in in the bathrooms (I don’t know if they still do – I haven’t been there since I yelled at Barry Bonds when I was drunk, in 1987). Target should install them, and dehumanize further, its customers.

That would be France!

Catch him as soon as possible.