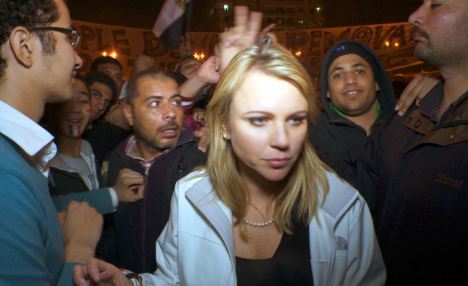 By Daily Mail Reporter – Feb 21, 2011
More details have emerged of Lara Logan’s terrifying ordeal at the hands of a frenzied mob.
The 39-year-old foreign correspondent for CBS News show 60 Minutes was separated from her film crew in Cairo on February 11 and surrounded by as many as 200 men in Tahrir Square at the height of the anti-Mubarak demonstrations. According to one source, reported in The Sunday Times newspaper, sensitive parts of her body were covered in red marks that were originally thought to have been bite marks. After further examination they were revealed to be from aggressive pinching.
It has also been revealed that she was stripped, punched and slapped by the crowd, which was labelling her a spy and chanting ‘Israeli’ and ‘Jew’ as they beat her.
And medical sources have revealed that marks on her body were consistent with being whipped and beaten with the makeshift poles that were used to fly flags during the demonstration.
An unnamed friend of the reporter told The Sunday Times: ‘Lara is getting better daily. The psychological trauma is as bad as, if not worse than, the physical injuries. She might talk about it at sometime in the future, but not now.’

Despite her ordeal, Miss Logan intends to return to work, as well as the Middle East. CBS News was not revealing any more information about the incident, except to say that she was the victim of a ‘brutal and sustained assault’ at the hands of around 200 men who had been ‘whipped into a frenzy’ on the night Hosni Mubarak resigned from power. Guards who had escorted her into the square were also badly beaten by the mob, with one suffering a broken hand, and it took women in the square and about 20 soldiers to finally rescue her from her attackers.

She was taken to the Four Seasons hotel, where she was treated and sedated by the hotel doctor. Within hours of the attack she was was flown out of the country and spent five days in a New York hospital.
Witnesses say the mainly peaceful protests to end Mubarak’s rule had taken a more violent turn after the Egyptian president announced his resignation. The military presence controlling the amount of people entering Tahrir Square seemed to evaporate, and an angrier element had flowed in. Miss Logan was attacked around 1am as she filmed in the square.
Egyptian state media had been publishing negative stories about foreign journalists, with many reports alleging that many Israeli spies were masquerading as news crews. Days before her attack, Miss Logan had been held in Alexandria on suspicion of being foreign spies.
~Posted by Eowyn

Democracy at work! (code for mob rule) Why oh why are we so busy spreading democracy around the world – we are supposed to have a Constitutional Republic.
Making the world “safe for democracy” is political lingo for NEW WORLD ORDER.

Unfreakin believable…hope she recovers ok.
I personally wouldn’t go back there if I was her. She may be brave yet things are getting very bad over there. No American reporter can be guaranteed safety.

I hope she heals,both mentally and physically,that was no place for a woman to be.

Wow, that was terrible. I cannot believe that men could do such a thing! >:/ They need to be considerite. I feel so bad for Lara Logan. :'( I hope she is well and okay. 🙂 Good luck Lara Logan!