The death of Kate Steinle meant nothing, ABSOLUTELY NOTHING, to demorats in California.
I cannot express here, within our guidelines, how outraged I am with the so-called lawmakers of that state.
From Fox News: Lawmakers in California on Saturday passed “sanctuary state” legislation even as President Trump and his administration have vowed to crack down on jurisdictions that do not cooperate with federal immigration agents.
The bill approved early Saturday limits police cooperation with federal immigration authorities and is intended to bolster protections for illegal immigrants in the state.
But the acting director of the U.S. Immigration and Customs Enforcement on Saturday warned of “tragic consequences,” saying the policy “will make California communities less safe.”
“By passing this bill, California politicians have chosen to prioritize politics over public safety,” Thomas Homan, the acting director of ICE, said in a statement. “Disturbingly, the legislation serves to codify a dangerous policy that deliberately obstructs our country’s immigration laws and shelters serious criminal alien offenders.”
Homan said ICE wants to work with local law enforcement to prevent “dangerous criminal aliens” from being released back onto the streets.
The legislation will now be considered by Democratic Gov. Jerry Brown, who announced his support after the top state Senate leader agreed to water down the bill and preserve authority for jail and prison officials to cooperate with immigration officers in many cases.
The bill that passed Saturday prohibits law enforcement officials from asking about a person’s immigration status or participating in immigration enforcement efforts. It also prohibits law enforcement officials from being deputized as immigration agents or arresting people on civil immigration warrants.
The legislation follows Trump’s vow to crack down on sanctuary cities. Such policies limit just how much local law enforcement officials cooperate with federal immigration authorities.
The debate about sanctuary cities intensified in July 2015 when Katie Steinle, 32, was killed as she strolled along the San Francisco waterfront with her father. Steinle was fatally shot by a illegal alien with a criminal record who had slipped into the U.S. multiple times illegally.
On Friday, a federal judge in Chicago has ruled Attorney General Jeff Sessions can’t withhold public grant money from so-called sanctuary cities for refusing to follow federal immigration policies.
U.S. District Judge Harry Leinenweber made the ruling Friday, in which he granted Chicago’s request for a temporary “nationwide” injunction.
The ruling means the Justice Department cannot deny grant money requests until Chicago’s lawsuit against the agency is concluded. Leinenweber wrote that Chicago has shown a “likelihood of success” in its arguments that Sessions overstepped his authority with the requirements.
The city of Chicago sued the Trump administration in August after it threatened to withhold funds from sanctuary cities, and refused to comply with the Justice Department’s demand that it allow immigration agents access to local jails and notify agents when someone in the U.S. is about to be released from custody.
At least seven cities and counties, including Seattle and San Francisco, have refused to cooperate with new federal rules regarding sanctuary cities.
DCG
Please follow and like us:

That’s fine. LEt them have their “sanctuary” crap. But this I’d tell them: should there be any natural disaster, you will receive food, medicine, and physical assistance but you will NOT receive ONE, SINGLE DIME of financial aid no matter the issue.
Your educational fundings are shut off. Your social programs are shut off. Your Law Enforcement assistance programs are shut off.
Effective this date, all these items are suspended until SANITY reigns again.
You chose to defy federal law – now live without federal assistance.

We have to treat these sanctuary cities like friends on drugs. Give them what they need when they ask for help without enabling them.
Buy them groceries, pay their bills and give them a ride but, under no circumstances, give them a tradable commodity, i.e., money.
It’s happened to me and it worked. They got the message.

One would think that any federal judge arrogant enough to rule against standing and especially well reasoned federal law would be instantly removed from his position.

One would think, indeed. But in this day, where political correctness over-rides truth, “emotion” guides jurisprudence and insanity governs personal responsibility, our courts are of no use.
I also believe that if a judge rules against the laws of the land, they should immediately be removed and, in some cases, where bodily harm or financial ruin result, prosecuted accordingly.

Do you know WHY a Judge will go against reasonable Federal Law like that? Because they’re AFRAID of the “repercussions” if they’re perceived of “wronging” a minority. If the Feds would “retire” a Judge for going against Fed. Law that blatantly,they might begin to weigh the balance between the LAW and staying PC. The ONLY reason they let emotion rule over law is because they get away with it,time after time,until they get their Pension.

Truth is the federal grants should not have been given in the first place. They are grossly unconstitutional. But, nowadays, who really cares about that outmoded, utterly irrelevant inconvenience known as the Constitution. Precious few, I dare say.
In meantime, all I can hope for now is that the pestilence known as California really does secede. It’s trying so hard to act the independent basket case it is, so why not get beyond your acting, California, and actually declare your independence. What a blessing that would be!

I think what needs to happen is that Governors who violate Federal Immigration policies with their declarations of (or EVIDENCE of) Sanctuary States need to be arrested and tried for their crimes against the People,and at the same time ALL and ANY Federal Funding to that State should be stopped. California is a creative universe unto itself,they’ll find a way to function without any Federal Funding-they could Tax all the ILLEGALS they’re inviting to share in their bounty,or pay them a lower wage ($10.00/hr.?) to do all the work TRUE Americans don’t WANT to do….

I’d hit the “Like” button a 100 times if I could. That’s precisely what needs to happen. Sure, cut their funds, but throw them in jail while you’re at it.

Hey-if any of US violated Federal Law on that great a scale,WE’D never see the outside world again…..

I can’t think of better proof of whose really is in charge. They have done this for a very long time. It has reached the point where it is impossible to ignore. The “parties” and “candidates” are just foils. They “use” these characters to move their agenda.
We don’t have a government. They DON’T WORK FOR US!

I’ve always wondered, for instance, truck—how is it that a lone illegal with “no economic advantages” in Mexico…can come up with anywhere between $2,000-$10,000 American dollars to pay for a “coyote” to bring them into the USA and dump them into the desert with MAYBE a gallon of water, and drive away to leave them to themselves to find the REST of the way into “safety” and “sanctuary?” That money is compounded if it is a mother with a kid….or a family…..IF they can pay that much to come here illegally, then why could they NOT get in line and… Read more »

I agree…we need to let California secede….they are so different from the real, true Americans. There are a bunch of idiots running that state, what will they do without taxpayers dollars from the feds? They will soon fail economically and there will be no one there to help as they have thoroughly alienated the rest of us!

As a native Easterner “trapped” in California by the last decade of economic malaise….house under water….etc……I agree Deleon—-hope California either secedes or is kicked OUT of the Union due to it’s anti-Federal, “state’s rights” stances (all the while sucking Federal funds through an IV continuously throught the years…..in support of their POOR decisions). I just hope there are “relocation and refugee fees” available to us who would leave everything we own behind…..refugee out……when it all happens.

I’d love to see this. Of course, if they won’t arrest them now, don’t you think they’ll bail them out with our money? I’d just erect the wall right along the California border and call it “Norte Tijuana.

Thank God there are 49 states that give sanctuary for people leaving California.
Christian Exodus from California
https://tim-shey.blogspot.com/2017/06/three-witnesses.html

It’s going to become easy to do a contractkill by using an illegal; they won’t be prosecuted when they do the contract, especially in Kalifornia, so whoever hires them will be safe from exposure 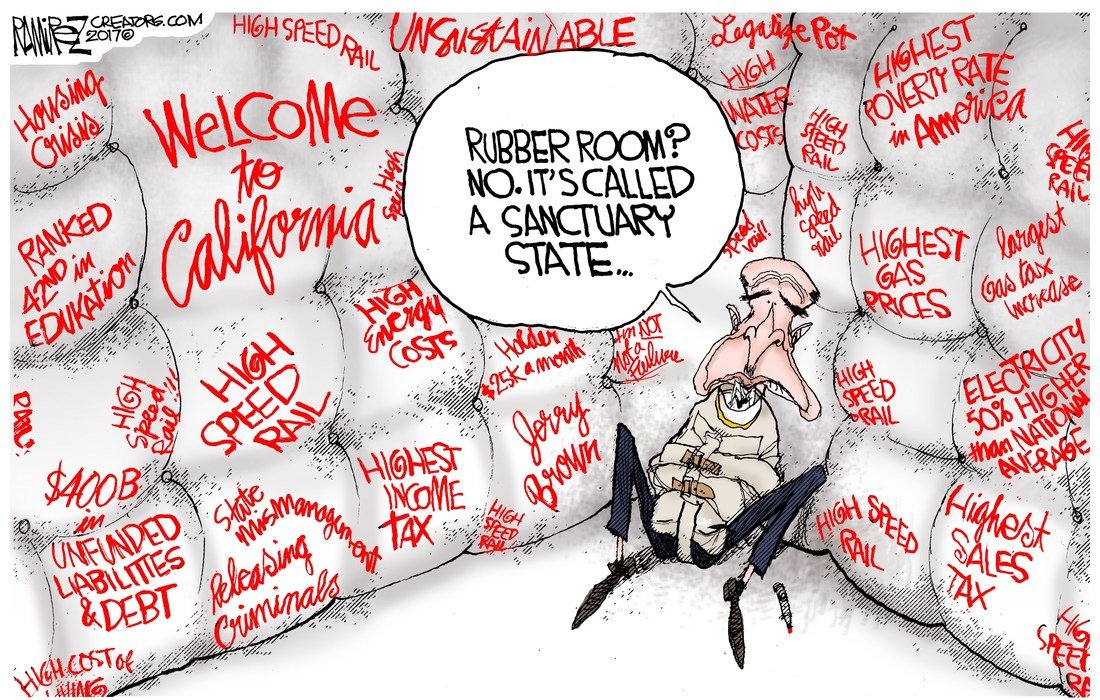 If they arrested the parasites that refused to honor their oathes of office and shut off all their federal funding, how will they run this little communist stronghold?
As I’ve said here many times, it was a great place to grow up. Not anymore. It seems to me that this one is more than easy. Let them go it alone. Where will they get help? North Korea?