Inspired in part by Watergate, in 1978 Congress passed the Ethics in Government Act, which among other things established formal rules for the appointment of a special prosecutor or counsel. With the expiration of the independent counsel authority in 1999, the Department of Justice under Attorney General Janet Reno promulgated regulations for the future appointment of special counsels. As of 2017, these regulations remain in effect as 28 CFR section 600. (Wikipedia)

The independent counsel law originally enacted in the Ethics in Government Act did not allow independent counsels appointed under the law to be removed except under specific circumstances such as wrongdoing or incapacitation. This law is no longer in effect.
The current special counsel regulations specify that:

The Attorney General works for the President of the United States, which means that the President can fire a special prosecutor, such as Robert Mueller who, in the nearly 11 months since he was appointed on May 17, 2017 to investigate Russian collusion with Trump in the 2016 election, has found no evidence of such a collusion.

“If the president does go ahead and fire Robert Mueller, we would have people take to the streets. I believe there would be widespread civil unrest because Americans believe the rule of law is paramount. I think you’re going have protests and marches and rallies and sit-ins. I believe Americans would not stand for the firing of Robert Mueller.”

Aren’t we all sick of these anti-Americans who want to destroy the laws of the country? Aren’t we just over it all? Really, this jerk thinks that Trump must be guilty of something and has no care for the taxpayer funds being spent by these Clinton loving and controlled slime. Gawd but I am just so danged sick of this crap. RULE OF LAW NEEDS A BIG COMEBACK

Yep. Maybe we could pick him up in the sweep for ignoring federal laws. It’s a perfect opportunity to purge California of communists.

I fully agree. Maybe ole Ted would be happier back in Taiwan, where was born.
If I remember correctly this isn’t the first time ole Ted has bucked the admin.

This just burns me to a bloody crisp! Here you have a self-righteous POS Demorat who is just aching to continue piddling the American taxpayers money down the drain. Eleven months and we have not one whiff of collusion on the part of Trump. But his horse’s _____, claims he will have the American people out in the streets over a lack of American justice. Mueller, who is a proven criminal, if you look at his past deeds while practicing law, brought together one of the most biased groups of people to ever convene in one place to consider one… Read more »

Amen, vent away. After all his time. We know if Mueller finds anything now, it will be manufactured. I think he has now gone the route of trying to finding any iota of evidence on anyone near Trump in order to threaten and coerce them into turning in Trump.
If I hear one more time what an upright and ethical guy this POS is, I may scream.

Dear Dr Eowyn .. . . Please have mercy on me and dig me out of the ditch. In the second paragraph, second line, the word “within” should read “without” catching . . . Thank you so much!

Says who? He doesn’t count. He’s on his way to jail – or did he weasel out of it?

Jail? I think you’re confusing Lieu with someone else.

Don’t get my hopes up. Do you know something I don’t?

We’ve all been pretty patient with Sessions. Horowitz’ IG report needs to come out ASAP, and once done, Sessions needs to do something with Mueller or move on. Sundance @ CTH (who is right more often than wrong) has been hinting that Sessions has been at work behind the scenes, as witnessed with the Utah prosecutor, but at some point there has to be an end to Mueller’s aimless witch hunt. It’s gathering information to be used against Trump in 2020. You know it, I know it, everybody on the planet knows it. They found NOTHING with the BS “Russians”… Read more »

Disgusted, I agree with you, we’ve been more than patient with Sessions, it’s time for him to go when he says we don’t need a 2nd special counsel…what? But I’ll tell you something about Sundance. I used to read them all the time at CTH, and then saw that even when Trump was wrong they covered for him, that’s not journalistic integrity. As well, anyone who disagrees with them or posts something from another article that adds to or disagrees with what they’ve posted, they cut you off from commenting. It’s happened to several people I know. You won’t see… Read more »

The only real criminals that Mueller has exposed are those of the Dem-wit persuasion, i.e. Peter Strozk, Lisa Page, and Andy McCabe. This piece of garbage, Ted Lieu, has made this same threat several times. That is a guarantee that he has much to hide. I look forward to seeing exactly what it is.

Yeah. I see that the nitwits actually about doubled McCabe’s target funding on the Go Fund Me site. How stupid. He’s getting his retirement plus a little 500K bonus. What a bunch of idiots. Who says crime doesn’t pay?

From Key Wiki, “According to the Communist Party USA’s Peoples World: ‘The heavily Jewish Los Angeles 33rd District that sent Henry Waxman to Congress for forty years until his recent retirement announcement has gone to the equally progressive Ted Lieu, who won with over 58 percent of the vote against a Jewish Republican with pronounced pro-Israel sympathies.’” Let’s hope Lieu and the Progressive Democrats of America (Bernie Sanders, pres) do foment insurrection in the streets to prove once and for all that Republicans in Congress are the best enemy big money Democrats can buy. The first words out of either… Read more »

Dan . . . . What an excellent comment! It really says something when the Jewish population refuses to vote in one of their own, who has sympathies to Israel . . . but instead goes for this Dumbo Ted Lieu. This really makes the rest of us stand around scratching our heads!

Reblogged this on kommonsentsjane and commented:
Reblogged on kommonsentsjane/blogkommonsents
Ted Lieu probably hasn’t read the Constitution and the oath he swore to uphold the laws of the country and protect the people
Sounds like Ted Lieu is planning to break the law when he calls for unrest. Lieu needs to read Article III – Section 3 which states treason against the U.S., shall consist only in levying war against them or in adhering to their enemies, giving them aid and comfort. Sounds like Lieu wants to start a war. This Lieu character needs to be kicked out of office.
kpmmonsentsjane

I’m pretty sure he sees himself as serving his masters. Those aren’t us.

Lieu stated: “I believe there would be widespread civil unrest because Americans believe the rule of law is paramount. I think you’re going have protests and marches and rallies and sit-ins. I believe Americans would not stand for the firing of Robert Mueller.”
Lieu is correct. Americans will sit and watch sports for it, unless they’re a rent-a-mob.

I say, let’s conduct an experiment. Fire Mueller and he can take Sessions with him. They can rant and rave all they like. Maybe we’ll get lucky and a few of them will blow a vein.

stlonginus . . . . Judging from how many ads go up on Craigslist for “Rent a Mob participants” . . . I think you really nailed it there.

Maryaha . . . . Wow! That statistic is just amazing. Thank you for providing us with that update. 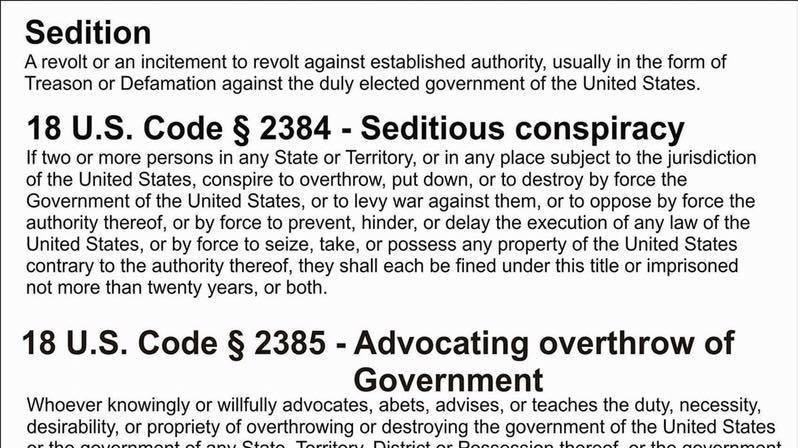 Cool. Now they need an AG to prosecute them.

Anonymous . . . . Bravo! That is just what we needed to see, the actual US Code wherein Seditious behavior is covered. We may need to built more Federal prison space if the US Courts go after all the culprits who have broken this law. Let the court proceedings begin !!!

Check this out. He bamboozled them on the way out: 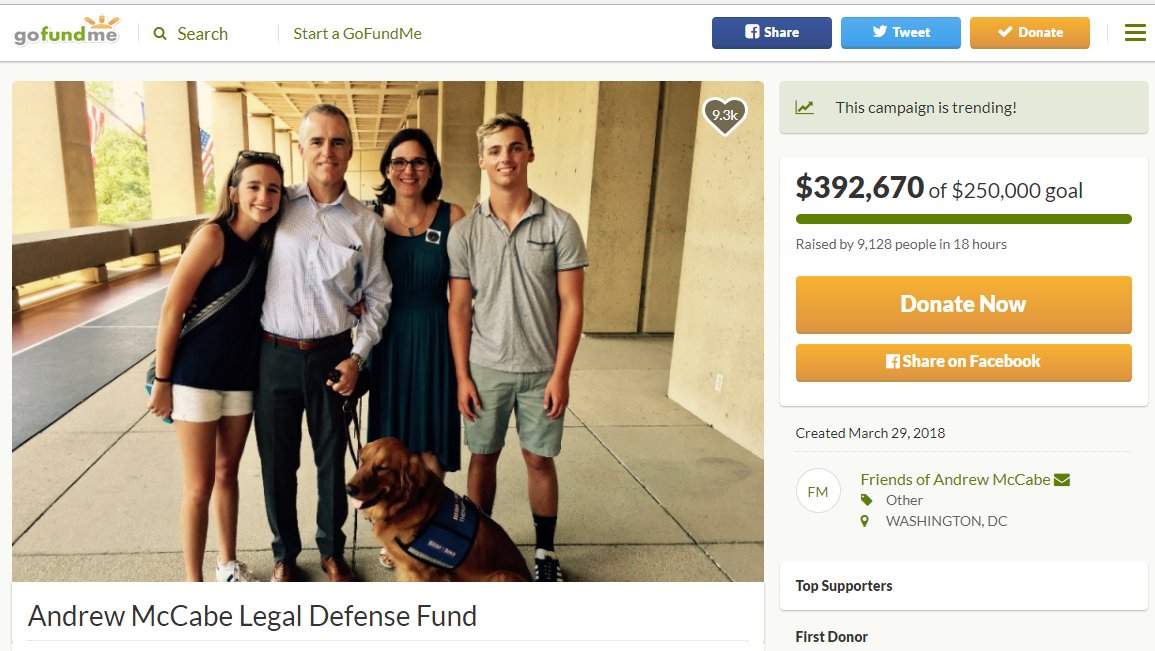 As someone that retired from federal service let me assure you that he was and is in no danger of losing his retirement. But, I guess lying pays.

Today I heard where his wife issued a statement about how her good reputation has been lied about…..cough cough.

There really is a sucker born every minute. The donors to the already multimillionaire McCabe give new meaning to the expression “useful idiots”.

….Can’t say as though it matters all that much to me…..since I am sick and tired of it all…..I’m just waiting for the revolution to start.

I certainly hope Mueller spends an equal amount of time investigating the left of all those that broke so many laws and put this country into danger. I won’t hold my breath.

Glenn47 . . . . With that many sealed indictments piling up… you would just imagine that they have to start unsealing and pulling these crooks, criminal, miscreants up by the scruff of their necks. I tend to be someone who is rather impatient . . . for me waiting for the indictments to be unsealed, and action to be initiated . . . has to be harder that waiting for Christmas morning to see what Santa brought for a five year old.

“If the president does go ahead and fire Robert Mueller, we would have people take to the streets. I believe there would be widespread civil unrest because Americans believe the rule of law is paramount. I think you’re going have protests and marches and rallies and sit-ins. I believe Americans would not stand for the firing of Robert Mueller.”
Followed, shortly there after, by the declaration of martial law and a calling up of the National Guard to quell such an insurrection. Rule of law being paramount and all…

its an insult to all of us ,to hear him saying ,,because americans believe the rule of law is paramount,, …well lemmi remind him that the democrat party is not America!! so gtf out of this awesome,great nation!!!! you moron!

Does anyone else recall a few years ago that Lieu? was confronted on video about pushing vaccine legislation and wouldn’t respond but ran down a hall like the coward he is? I checked online and it appears it may have been pulled by utube, so I can’t 100% confirm it was Lewd, I mean Lieu. Perhaps I am confusing him with someone else but his face looks like the one in the video I believe. If he’s not the one, then I apologize but this guy is no shining example of a legislator for the people by any means.

Go ahead you jerks in Calinsaneafornia, tear the place apart, = we may not see any difference in the way you presentlykeep the Place.

UPDATE – https://vimeo.com/166083184
Senator Richard Pan runs from Vaxxed producer’s questioning
This is the scumbag who ran from vaccine legislation questioning.