California governor Jerry Brown is in the midst of a 10-day tour in Europe to propagandize about anthropogenic (man-made) “climate change,” which will end with the United Nations conference on climate change.
Several days ago, at an event organized by the Vatican’s Pontifical Academy of Sciences, Brown bemoaned about humans’ “greed” and “inertia” and urged that a “transformation” is needed in our consciousness — that what is needed is mass “brain washing”. (See DCG’s post here.)
Yesterday, Brown was in Bonn, Germany, at the U.S. Climate Action Pavilion on behalf of “America’s Pledge,” which brings together leaders from both the private and public sectors to ensure the U.S. remains dedicated to the climate goals of the Paris Agreement that President Trump had nixed because the agreement would undermine the U.S. economy.
Mandy Mayfield reports for the Washington Examiner that what appears to be a handful of protesters disrupted Brown’s speech by yelling and chanting about fighting pollution and keeping oil in the ground.

“I wish we could have no pollution, but we have to have our automobiles. I agree with you, in the ground. Let’s put you in the ground so we can get on with the show here.“

Imagine what the MSM would do if President Trump had called for putting protesters “in the ground”.
Nor do I believe Jerry Brown was joking.
If the Left had their druthers, they would have all dissidents exterminated.
Do you remember that commercial for the 10:10 Campaign — a worldwide campaign to reduce carbon emissions by at least 10% by 2010? In the commercial, school children and adults who refuse to join 10:10 are blown up into bits, their blood and pieces of flesh spattering those nearby.

wow! I had forgotten about that video!
it amazes me that california (brown-stain) gets away with so much…when was the last time a federal judge stepped in to block ANYTHING california brown legislature wanted to do or refused to do?

Did Mr. Brown travel to Europe by ship or did he fly in one of those pollution-causing planes? He’s got a lot of nerve calling other people greedy.

The elites have no problem with their hypocrisy. THEY know better than us, THEY are better than us, and THEY have special exemptions because of their special knowledge and powers. NPD makes them a special legend in their own minds.
The media will not call any proggie out on their BS because the media is cut from the same special cloth.

You’re exactly right, the elites think their life is so much more valuable than us little people. They will be very surprised one day when they find out that Satan has greatly deceived them. They may gain the riches of this world, but they’ve sold their own souls for it. The parable of the rich man and Lazarus comes to mind.

Doesn’t matter how he got there. It required energy. How much do we allow to be used Jerry?

Knowing Jerry, he probably astral projected. His father, Edmund G (Pat) Brown was governor before him. As parasites go he wasn’t a bad sort. He was MUCH more rooted than Moonbeam. During Jerry’s first incarnation he was billed as a sort of aesthetic. He had a St. Francis vibe. He wasn’t married and the press struggled mightily to pump a relationship between him and Linda Ronstadt as romantic. I always (and still do) thought he was “gay”. Trust me, I couldn’t care less where, or with what, he mates. We would see him at Mass sometimes in the cathedral in… Read more »

He flew there under the power of his fairy wings and the unicorns met him when he landed.

Reblogged this on kommonsentsjane and commented:
Reblogged on kommonsentsjane/blogkommonsents.
Governor Brown’s threats need to be taken seriously. Remember when you hear a terrorist making threats you turn him in – well, the whole world heard it – who is going to turn him in?
When Governor Jerry Brown can prove his theory – then we will get serious about “climate change.” He knows nothing about this subject and until the scientists can prove it – then we will revisit it.
Again, his threats against the citizens need to be taken seriously – he has gone off his rocker.
kommonsentsjane

Killing, extermination, putting people in the ground, is this the new norm for fanatic democrats to vent their emotions? I remember, a long time ago, a person would be arrested and thrown in jail for the mere fact of threatening someone with bodily harm, what if these threats come into fruition. The list is long and non-stop, Jerry Brown, Madonna, Latrine Waters, Kathy Griffin -they have money to buy famous criminal attorneys to get their asses out of jail.

It seems a little “ironic” when someone sworn to uphold the law is assaulting the people who put him in office. I’m reasonably sure this is illegal.

My wife and I attend environmental/wildlife lectures in the LA area where
professors and other researchers discuss ecological degradation and
what to do about the dangers. Frequently the speakers now call for
totalitarian (aka communist) solutions of banning free speech and
imprisoning resisters to Cultural Marxist plans. Moonbeam Brown
who has destroyed the state his father help create is in the forefront
of this police state effort.

ADDENDUM: What is surprising most of these speakers seem to have
no concern about nuclear power and Monsanto. This is not the spirit
of the Save the Earth movement of the 1970s.

Good points, Monsanto is killing us much faster than any warming.

yep, brown, monsanto, and other govt corporations should be held accountable for the real evil that is going on….the real evil of profiting by affecting lives through illness, death, disease, and lies.
usa is a haven for corruption…all of the countries the usa has had it’s hand involved in with ‘regime change’ can’t hold a candle to the evil that our corporate govt puts on its own citizens and other countries.

Much prefer anthracite to nuke power anywhere, especially when so many plants are built over earthquake/ring of fire zones. And nuclear waste? And we then declare ourselves to be an intelligent species! Please, dear Lord, save us from ourselves!

Governor Brown is a Baal Worshiper/devil worshiper. If climate change is man-made, then it is because of sin. Sin defiles the earth. And when enough sin defiles the earth, the Lord will have to judge that part of the earth.
With people like Governor Brown in positions of power in the state of California, when will the Lord destroy California?
Today’s Baal Worshipers
https://hitchhikeamerica.wordpress.com/2012/11/28/guns-dont-kill-people-liberals-kill-people/

What a great example he projects, threatening lives. What a hypocrite. He is running around the world running up a heck of a tab in the debit card of California while adding to any pollution with his jets. Never liked that guy, but California seemed to have wanted him. Poor saps.

FREE STUFF,Let everyone do whatever they want within the Liberal Party’s (loose) confines. ALL sins are acceptable. That’s what attracts these people to Moonbeam.

That was my initial thought: Isn’t California broke financially? Who the heck paid for his 10-day, all-expenses paid trip to Europe, to conduct his own personal-ideological “business”? Who benefits?

What is he complaining about the population when he let huge herds of illegals in? Climate change is due to mostly Geoengineering.

Just another hitler going to put those he feels are beneath him in the ground. I take his threat to kill those opposed to him seriously. Wonder what would have happened if someone had assassinated hitler before the war?

Brown has gone from a mere curiosity to a guru and now, onto being a mental patient. But I get it: He’s precisely the kind of character the New World Order wants to deflect and distract we of the public who are awake. Climate change ideology, like its parent, British Eugenics, is a religion: It has its own cosmology, metaphysics and rituals. It has its own oeurve, its own milieu, and Jerry the Jerk Brown is merely its latest burnt offering. Jerry Brown has more than proved himself to be a politically and personally dangerous individual, and his neglect over… Read more »

The technologies for fossil free energy have been in the hands of some of the global elite for decades. Inventors have been silenced via money and murder. Dr. Steven Greer stated we should have had access to these technologies 100 years ago. It’s this lack, of course, that has resulted in the poisoning of our water, air and food supply. Some of the megalomaniacs who run the world are using some of the technologies for their own use to keep them healthy, extend life and produce energy to run their private compounds without sourcing fossil fuels. They don’t want to… Read more »

Why are we still calling it “fossil” fuel? Didn’t dinosaurs live ON the planet and die close to the surface and therefore weren’t their bones left near the surface upon death? Don’t we have to drill rather far down into the earth to get the oil out?

This is an absolute load of hooey. The audacity of this little putz to threaten citizens that won’t swear allegiance to their made up garbage is disgusting. He should be impeached.
He was a ditz the first time around, now he’s an asshole. Maybe he could speak to “Little Kim” about making his state a Maoist paradise. There must still be some of those Little Red Books around in Spanish.

Typical progressive liberal attitude (Google’s based in CA, isn’t it?)… 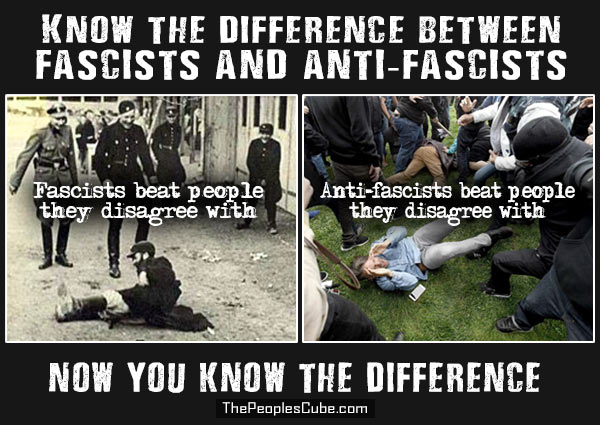 It is frustrating these climate changers refuse to admit the heat is coming from over 90 underground and underwater active volcanoes all over the world. We are still trying to recover from the last ice age.

And CA has it coming, the fault line and a big “shake” is going to swallow them.

especially since FEMA helped out the flood insurance industry by changing flood zones, I think in 2014….I’m suspicious “something” is coming sooner than later.

Go for it, komrade moonbeam. 🙂

Let’s put you in the ground, but first, for the sake of peace and to save lives, we will have to take your guns away. 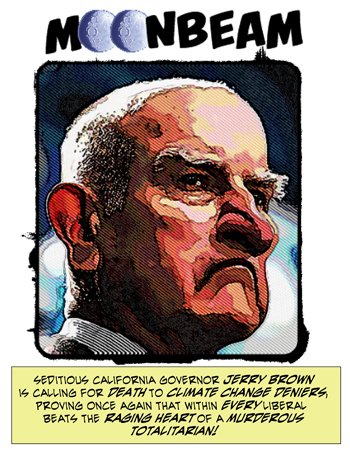 the ground will not have you cause you are full of a form of disease called liberalism. me thinks you burned out all your common sense smoking pcp in the 60’s.you will not be missed