No doubt this will surely enhance any one’s resume, particularly if you want to work at Vox.
The professor teaching the course, Ann M. Savage, has a 3.2 rating on RateMyProfessor.com. Her picture is not provided on the Butler University web site.
A description of the course (which is full):
“An in-depth study of a particular topic in the field of media, rhetoric and culture. This course offers a broad historical, political, and critical communication studies approach to understanding the rise of Donald Trump as a political and social phenomenon. The course draws from the widely circulated Trump Syllabi (per the Chronical of Higher Education and Public Books) crowd sourced by some of the nation’s leading scholars in American Political Science and history, demography, cultural studies, sociology, and more. The course will provide context and depth for student citizens as we look to historical and current texts by renowned authors as well as read excerpts from Trump’s own The Art of the Deal. Students will potentially attend, as participant observers, campus and community events to witness ongoing responses to Trump’s presidency and campaign. To instill disciplinary diversity, the course will invite faculty from across campus to guest lecture.”
The University has responded to the criticism of this course:
From MSN: Butler University, a private school in Indianapolis, has responded to criticism of a “Trumpism & U.S. Democracy” course that was offered to students in order to “potentially engage” in “strategies for resistance” to President Donald Trump.
“Just as I support this course, I would support a course that is complimentary of the President,” Butler provost and vice president for academic affairs Kathryn Morris said in a letter posted to the school’s website. “Butler offers a variety of courses that tackle controversial topics. Like any University, Butler should – and does – promote an environment of critical inquiry and engagement on controversial and unpopular topics.”
Outrage about the class began as a version of the course description circulated on Twitter describing the President as a perpetuator of “sexism, white supremacy, xenophobia, nationalism, nativism and imperialism” began to bubble on conservative news outlets. Shortly before, former Indiana state Sen. Carlin Yoder, a Republican, tweeted a photo of the course description on Tuesday.
Morris said in her letter that students are not required “to participate in activism” should they enroll in the class, which will still be taught in the upcoming fall semester, but with an edited description that features toned down language.
“The professor has been very transparent about the goals of the course and has provided additional context that clarifies students in the class will not be required to participate in a particular form of activism,” Morris wrote. “They will be asked to engage with classic and contemporary readings, including a text by President Trump, and evaluate the rise of the President as a political and social phenomenon.”
Indiana is the home state of Vice President and former governor Mike Pence. The White House did not immediately respond to a request for comment.
DCG

Who wouldn’t give a job to someone who demonstrated his intellect by acing a course like that. I wonder what sort of minor he’d have? Probably converting pressure cookers into bombs for an Albanian transsexual interpretive dance class.

Another waste of time and money at the indoctrination center.

Here’s a pic of Ann Savage!

Seriously, being a (full) Professor of Communications who was awarded a Distinguished Faculty $ Award in 2016, Ann Savage’s salary is probably in 6 figures. You’d think she could afford a decent hairdresser and wardrobe.

A decent hairdresser and wardrobe may not be of help to her.

Can anyone say “lesbian discourse analysis,” in this case arguing backwards from the conclusion that the President is a perpetuator of “sexism, white supremacy, xenophobia, nationalism, nativism and imperialism.” Academic VP Morris’s giveaway is that students will “engage with readings,” which is leftist lingo for “interrogating” those readings so that no matter what the text says, the students had darn well better reach that predetermined conclusion from their readings or they’ll get an F as big and fat as Ann Savage. As Roger Scruton points out, these courses aren’t about imparting Western culture, but inoculating students against it.

I wonder if Ann is a trans…. 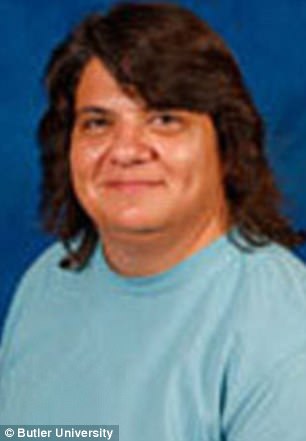 Your degree will read. “A Degree on how to waste time whining about why President Trump IS the President of the UNITED STATES.” Your class assignments will include, How to block traffic, How to start street fires,how to ransack innocent businesses. You will be paid out of the public tax coffers as long as you don’t get a real job or pay any taxes!!

I agree, Dave–all the butthurts will go to Butt-ler University and get degrees by perfecting their skills at behaving like real BUTTHEADS!

Ann Savage, or “Mack” to family and friends, is another libtard with bad hair, bad clothes, and ideas to match. You can’t fix ugly or stupid!

She looks more like the rest of the so called profs that teach sexual history to me.
Not required to participate in activism, my foot, you can bet it will be encouraged.
I read on the description of the course she will be pandering the same o same o as far as why Trump won, white supremacism, xenophobia, etc. I don’t know where she is from, but with Indiana being a basically conservative state, we will see how this goes over. Especially if she starts encouraging people to protest.

Then they should get their funding yanked!

Butler is a private university.

Seriously, read the info in the link Dr. Eowyn posted for Butler… for the distinguished professor award. It couldn’t describe the woman in the photo more perfectly. Just incredible the bovine excrement they allow to pass as higher learning these days. And the school awarded her a high commendation for her work.

Any time I hear a lefty perfesser refer to this country as a ‘democracy,’ know I’m dealing with an idiot.

According to the Webster Dictionary definition of sedition, this course fits those charges! IMHO, we need to stop any and all public funds (as in OUR tax money).to schools that are teaching ways to protest against a lawful government. What a shameful thing for the home state of our Vice President; a course that will even have students take part in “strategies for resistance”…IE: to plan and take part in resistance to the government.