There is hope for America’s young.
Despite the partisan political indoctrination students are subjected to in our public schools, students in one high school pushed back by posting in their classroom a Trump pic with the words “Obama, you’re fired”; Trump’s agenda; an Electoral College map of the 2016 presidential election; and a paper “wall” in support of President Trump’s proposed US-Mexico border wall.
All of that, of course, is called “racist” by the Math teacher who made the video.
https://www.youtube.com/watch?v=d0cHDLcKLu4
I scoured the comments on the video’s YouTube page, as well as blogs that posted the video, but no one knows which school it is or the name of the teacher.
A YouTube viewer Abc Abc describes the political indoctrination he experienced in school:

“I just graduated high school and the head of the English department is a radical feminist, and she teaches 6 different English classes, sophomores and seniors… and in AP Literature we have a feminism unit, a white privilege unit, and other crap, and she told her students to take BuzzFeed ‘how privileged are you’ test. We did a unit about gender roles and how they are bad and we need to break free of them…. In history class this past year, I had one semester with one teacher, and second semester with another. In first semester, we watched a pro Hillary documentary the day of the election (some students were 18 and could vote and that swayed their vote to Hillary). And in the same class we watched a pro-ILLEGAL immigration documentary. Yes, ILLEGAL immigration. It was all about how illegals are nice and changing some guy’s mind about it in the movie. In second semester with a different teacher, we watched an anti-gun documentary, a biased police brutality documentary that disrespected police officers a lot (police brutality is awful and never acceptable of course but they portrayed it so wrong and leftist), we watched youtube videos against the trump travel ban. And videos against the electoral college. It made all the students think Trump didn’t deserve to win even though he campaigned in a way catered to the electoral college. it’s not unfair, he played by the rule and won all the important swing states. The teacher also said that the United States taking in ‘only 50,000 refugees a year isn’t that many,’ and made the class feel like we should take in more. In government class we were discussing current events and remember that nonsense thing with Mike Pence and his AOL server? It wasn’t comparable at all to what Hillary did and Pence literally didn’t do anything wrong or illegal. He didn’t smash blackberries for fucks sake. It’s not comparable to Hillary at all. And the teacher said to the class, ‘So guys isn’t this a bit hypocritical? Is this a big deal?’ And the zombified class was like, ‘yeahhh…’ and I said out loud, ‘No, it’s not.’ And the teacher shushed me and waved her hand at me to dismiss my comment. When I was a junior (2015-2016), I had a really nice history teacher but when we got to the part in US history about Roe V Wade, she literally told us what opinion to have about abortion. Pro choice obviously. And she also told us that Trump is racist. And a bigot and whatever. I don’t mind political opinions from teachers personally but I think they have a responsibility not to say that to the class. My art teacher is my friend but … he wants socialism. ‘Democratic socialism,’ he says. I only got interested in politics once Trump started running, so I wasn’t even paying attention to bias in classrooms before that… but I’m sure there was so much liberal crap that me and other kids just absorbed without even noticing.”

Who gives a damn what an union slug guaranteed a job for life because of Affirmative Action thinks! Do well, succeed and leave her in the memory hole of your mind. I can’t remember 2/3s of my teachers so I don’t want a single one of them to show up taking some of the credit for making me the success I fought alone to achieve.

Bravo! I find that the only teacher’s I can remember from high school are Mrs Mushet, freshman home economics, and as a senior I had a teacher for “office machines” (10-key, mimeograph, prehistoric type stuff by today’s standards) by the name of Miss Richards. Everything else is a blur.

So, what ever happened to teaching reading, writing and arithmetic?
Since when is it mandatory and allowable for teachers to force their opinions and beliefs upon their students?

Since 2000. It began with BDS and it now certified A OK under TDS.

Add to the fact she is the perfect example of a person PO’d at the world because she was born black.

Those things are “racist” and against “social justice” now… gotta have Leftist brainwashing instead.

A math teacher? Of course, she teaches DIVISION and RACISM. What a sarcastic bitch instilling violence, of course not in the school as she is being filmed. I love the way she speaks, an educator allright but the lingo goes “you can get the ‘girl’ out of the ghetto but you cannot get the ghetto out’ o the girl”!

What a dumb ass, doesn’t she understand the meaning of the feeling is mutual? Girrrrrl, take a course in refinement, it’ll do you good.

In the instance of each of the teacher’s in this clip, the students picked out stuff that they knew would hit their “hot buttons.” This is the kind of stuff kids do at that age do . . . I do not believe that it is born of racism necessarily, they are just being smart asses. Let’s face it, harassment is something that kids that age do very well. Perhaps the kids felt pressure from each of these teachers to “conform to their leftist way of thinking” which would almost without reservation send them in a different direction. Talk about… Read more »

Alma . . . Thank you . . . secretly I do fear that one of these days my big mouth is going to get me into trouble!!! But until then . . . Truly, I do grieve for the fact that today’s school children have been sacrificed on the alter of the Leftists/Progressives/Teacher’s Unions, and that educating the next generations of our citizens merely comes in second to providing jobs, and brainwashing today’s youth into thinking the way this cabal wants them to. In 1970 I received graduated college with a teaching certificate, but at the time there was… Read more » 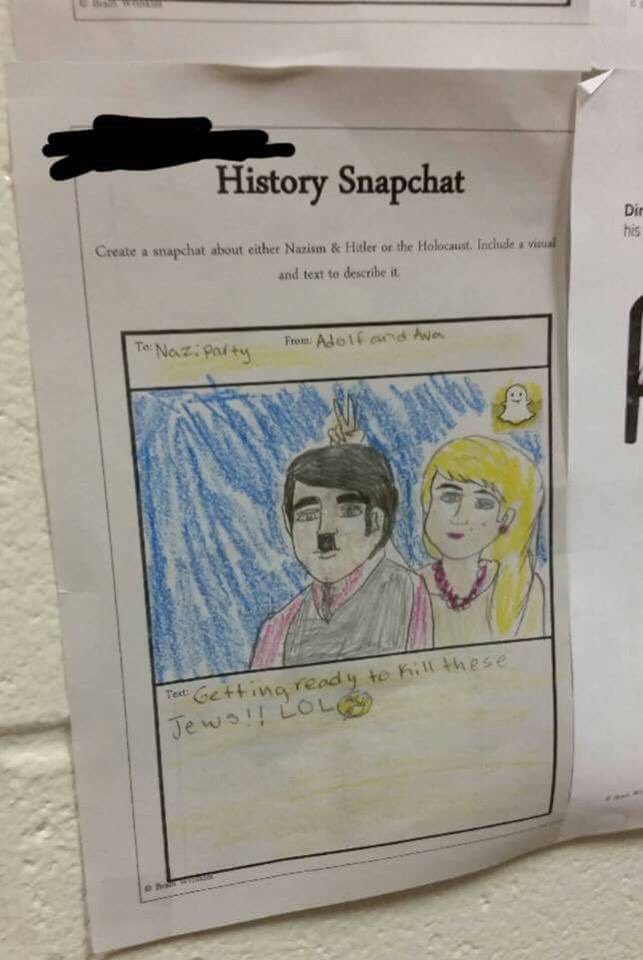 All of this is manipulation, knowing or otherwise. It is designed to sow division and chaos. All the better to control us. The schools should not be a bully pulpit for any teacher’s personal agenda. They should be aware of where they are, what they are being paid to do, and the limits of responsible action given their positions. It is true that the students will know their teacher’s hot buttons. We did, even in an era when this wouldn’t have been tolerated. I had some real loser high school teachers. Most were retired Air Force officers. They were doing… Read more »

Thank you Dr. Eowyn for this amazing post, and especially for your meticulous research. The attempt to indoctrinate people in this fashion is horrible, especially for children. That is why it is so important for parents to teach their children properly so that they can recognize such indoctrination and reject it.

joandarc . . . Amen! and Amen! Truly Dr Eowyn is a selfless person who works tirelessly on behalf of those around her. There will be a special place in Heaven for her.
I certainly do agree that parents should not leave it entirely to the school systems to “educate their children.” Parents need to know exactly what the schools are teaching their children, and if needed, they need to re-educate on any issues they feel are improper. There is nothing as important as teaching in the home.

It’s true that a lot of people won’t even remember their teachers’ names (though I can recall about 80% of them easily), but it’s not so much that they’re spewing their opinions & thoughts as fact, as it is the carpet-bombing approach to pounding it in the students’ brains constantly without letting up. My daughter went through Common Core (it would’ve been nice to stay home & school her, but not may can afford it), and it shows, especially in math. But at least she was smart enough to ask why I was voting for Trump last year. She could… Read more »

she said she teaches “kids” so I’m guessing HS students… I notice she’s tall and almost every poster of Trump was set at her height and ‘the writing on the wall’ was very evenly spaced and clear, as if done by someone who was used to writing on the board… everything seems to point to the teacher as the one who decorated her classroom with pro-Trump memes, the writing on the board, the gap-toothed masks, and the wall…her friend (who kept gasping in the background) probably helped as well. she wants to portray Trump supporters as “racist”, but instead this… Read more »

lophatt . . . You just hit that ball out of the stadium with the picture of those three scoundrals!!!! My congratulations to you.

Where’s Jesse Jackson?!? Isn’t he a member of this club.

Everything is racist, sexist, homophobic, Islamaphobic or environmentally hazardous. Must be tough going thru life with all that butthurt.

Yep, it’s gonna take more than “Preparation H” to clear that up.