Some are more equal than others.

Last week, like the state of California, health officials of Oregon’s Lincoln county issued a mandate requiring everyone to wear a face mask when out in public where individuals may come within six feet of someone outside their household. Exempted from that rule are those under 12 years of age, those with medical conditions who have difficulty breathing with a mask on, and those with disabilities that prevent the wearing of a face covering.

On Tuesday, June 23, however, the county added another exemption.

Katherine Fung reports for Newsweek that non-white people (“people of color”) are exempt from the mandatory face mask rule because, according to Lincoln county, “people of color…have heightened concerns about racial profiling and harassment due to wearing face coverings in public” — whatever that means.

County health officials said: “No person shall intimidate or harass people who do not comply. This Directive is intended to induce voluntary compliance and compliment education and encouragement of use of face coverings to protect ourselves and our community.”

Lincoln county, named after President Abraham Lincoln, is on the coast of Oregon, with a 2010 population of 46,034. The county seat is Newport.

The obvious questions that must be asked are:

That’s racist, they WANT black people to catch the flu!

My thought, too – let’s see how long it takes for minorities to figure it out.

Right…this entire thing is manufactured, from the very get go. Masks, distancing and everything else is a lie from the pit.

If the institutional hate and discrimination of Caucasian people isn’t obvious to all anyone at this point they might as well be pronounced brain dead.As with everything Satanic, reality is the opposite of the mainstream narrative. Last time I looked at the Constitution in so many words it said that all men are equal under the law. This is plain racial discrimination and anyone with two brain cells who lives in Lincoln country needs to defy or challenge this. We all knew it would come to this didn’t we? That lifting up of African Americans was never about equality, but… Read more »

Well said, and no apologies necessary for telling the truth!

Thanks Jackie. That’s the way I feel too- the truth is the truth, even when it’s brutal sometimes.

“people of color…have heightened concerns about racial profiling and harassment due to wearing face coverings in public” Lincoln County is 88% white. Sounds like they are calling the majority of their residents racist for making POC have heightened concerns (because white people assume a POC w/a mask on is a robber?). Or are the POC racist for assuming that white people think they will rob if wearing a mask? And what do you know: The county received unfavorable (racist, of course) feedback and now the county blames YOU: “Let us be very clear. The Directive and policy were meant to… Read more »

this what happens when liberals flee Calif. for greener grass to chew up and deposit on the people. same is going on here in Maine.trump was here a few weeks ago to honor a business that makes medical supplies. the radicals also were there

many many people in this nation will not face the fact that they are useful idiots for the globalist. where are the black leaders to show their people the truth?? all we get is the P.O.S. sharpton who should be in prison for tax evasion

That directive of mandatory face masks is statewide in NY. The question of where Fuhrer Cuomo derives this authority is blithely ignored. Is it not astonishing, the rapidity with which the American people laid down any hope of asserting civil rights under this withering tyranny? I suppose we are no longer worthy of liberty, since the majority are now cowards.

Same goes in Nevada-SO far,up here in the un-civilized end of the State,voluntary compliance appears to be VERY low,and our Sheriff says he won’t be enforcing ANY unconstitutional laws,which THIS IS. I’m doubtful the local cops will either,but I don’t have as much faith in THEM as in the Sheriff. We’ll see…..

I’m STILL convinced,as I have been since the first obviously stupid “requirement” was called for,that this really IS a TEST,to see just how much the people are willing to comply with just because “WESAYSO”.
Sadly,I think America has passed their test with flying communist colors. They are likely satisfied that making our Country a Communist Nation won’t be hard at all–except for those pesky GUNS. But I KNOW it won’t happen without a SERIOUS fight from the REAL Americans. 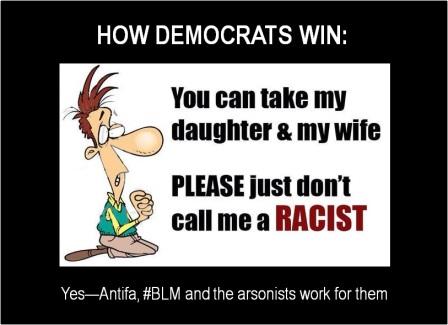 I’m trying to come up with a calm, measured response to this governmental overreach, but all I’m getting is expletives I can’t post. Wow!

OK by me. Let the virus rip. Let’s see if it ONLY attacks those who are “politically correct” or not. I’ll abide by the death statistics and get back to you on this..