Don’t expect the media to call Biden out on this. They will protect him, as usual.

From Fox News: Democratic presidential nominee Joe Biden alleged on the campaign trail last year that he had jumpstarted his academic career at Delaware State University.

However, according to a new report in The Washington Times, the historically Black college refutes Biden’s claims.

The director of news service for Delaware State, Carlos Holmes, said that the former vice president was never a student, though he has made appearances on campus twice before for commencement speeches at the university in Dover.

“Vice President Biden did not attend DSU,” Holmes said earlier last week. “However he was the Commencement keynote speaker in 2003 and [2016], and during the former he was awarded an honorary doctoral degree.”

Biden had made the claim during an October 2019 town hall event held at the historic Wilson High School in Florence, which was founded in 1866 by the Freedmen’s Bureau for Black children seeking an education. “I got started out of an HBCU, Delaware State — now, I don’t want to hear anything negative about Delaware State,” Biden told the crowd, as shown on video. “They’re my folks.”

Just one of Biden’s many, many lies.
Of course, this wouldn’t matter to Demonrats. They’ll vote for him even if he’s arrested and convicted for pedophilia.

the truth of god
Reply to  Dr. Eowyn

there ls the problem. he will never get convicted of pedophilia along with clinton for rape, murder, treason, drug dealing etc etc

I do believe many would vote for Biden even in the face of proof of crimes against humanity.

OBAMA is still the king of bullsh#t and lies. nothing new with these traitors, their whole rotten miserable life has been a lie.this is the only way they can get elected or promoted to sidewalk crap cleaner. the day he and his like leave this planet will be a joyous event for mankind

I’ve been amazed at Biden’s recent statements in his campaign ads. Lying is apparently his native language. 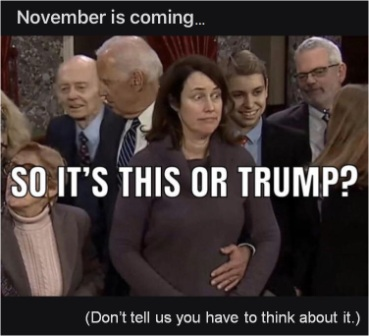