I’m republishing this post because Drudge Report today posted a link to a site called GrabienNews that only just discovered the video of Obama in 2008 sporting an erection on a campaign plane, with female reporters cheering their appreciation.

And yet the MSM are still in a lather over Donald Trump’s locker-room guy-talk from 11 years ago, while ignoring a man who became the President of the United States showing off his erection to a planeload of reporters.

Strike a blow for truth by making this post go viral via email and social media!

We really must be in the end days.

The President of the United States gives Americans the finger, and picks his nose in public.

The First Lady of the United States scratches her crotch (see “First Lady of Itchy Crotch“) and, while delivering a speech at the National Governors’ Conference in the White House, lets snot drip from her nose for a full 10+ minutes. (See “First Lady of Snot”)

Now, I discovered a video showing the President of the United States with a boner.

I kid you not.

The video clip begins with Obama inside a small commercial airplane. He’s dressed casually, in an open-collar white shirt, no tie, and dark trousers. Since it’s not Air Force One, my guess is the video was taken sometime during the 2008 presidential campaign season.

The video begins with Obama standing at the front of the cabin aisle in full view of the other passengers, talking on a mobile phone.

For some reason, he twirls around, first clockwise, then counter clockwise. At the 0:14 mark, a female voice (a reporter?) can be heard calling from among the passengers: ” . . . Check it out!”

The video next shows Barack Obama with what appears to be an erection (0:15 mark):

After which, instead of sitting down in a seat so as to conceal his erection, Obama puts his left foot on a passenger seat, his boner still plainly visible. (0:16 mark)

Sound of females laughing in the cabin, and Obama saying, “No flashing.”

Then Obama moves to his right so that his crotch is now blocked by the back of a front row seat. But the Caucasian man in that seat must have had an eyeful.
The video clip repeats itself beginning at 0:41. Pay particular attention at the 0:15 and 0:51 marks.

Of course he’s disgusting! He has approved of every low life act one can think of!

The obama’s are classless!!!!!!! They are crude, no manners, and they think they are better than anyone else.

If that really was a boner all the reporters would have been men.

You know how, when you hear a warning not to look at something due to it being way too disgusting, at first you wrinkle up your nose at just the thought of it, but next, you feel this overwhelming inner need to just take a brief look? Well, “eye bleach” is exactly what I need right now, because I did just that, and I should know better by this time in my life! I am both outraged and disgusted at both that idiot with the strange lump in his britches, as well as with that so-called woman who stood there… Read more »

Anonymous . . . you have brought up the very thing that is incredulous! How does “private” locker room talk of 11 years ago possibly equate to the on-going antics of the top Democratic leaders of this nation????? I for one cannot get a handle on this. They do not seem equal in any degree. Does this mean that any sin which has been committed by anyone of us can never be forgiven? If this is so, then all is lost!

But with Democrats (just like the Soviets) it’s all about “relationships” and corruption, so anyone unpopular gets grief…

stevor—I thought the SAME thing—-I immediately wondered ” WHO is on the other side of this camera—MALE or female???” Then, there was this OTHER thought: ” Are you kidding me—-what IS there to “erect” for FEMALE “reporters?” The 3rd possibility is the sexual HIGH he gets from successfully screwing the American Public……could bring on a big erection IMO…..IF, that is, it’s “your goal—your “high”…..”

Agreed, all this stuff is too crazy-making, best stay away from it.

The Obama’s once again have shown their true colors and it has nothing whatsoever to do with skin pigmentation. They are Rude,Crass, Crude, Disgusting,Socially Lacking, Reprehensible and Low Class beyond the imagination. I am embarrassed to admit that they are the First Family of our country. I feel like I need a shower after watching this, as my skin is crawling. What a PIG…

Presidential Class! (Not!) :-/
I’ve also been seeing comments re JFK’s dirty deeds, such as making reporters swim nude in his pool before allowing them to ask him questions, etc. True? I don’t know! But gross!

The Obamas are pigs. Problem is, so are the Bushes….

Then you must be blind. I’m embarrassed for you.

I think the locker room talk is disgusting because it could have been my mother, my sister, my daughter he was talking about. AND he still does the talk. Would you think it ok if it were your daughter, your sister, your mother?

So you find locker room talk disgusting but not Obama showing off his penile erection to a planeload of reporters? Your priorities sure are screwed (no pun intended).

I’d say screw it. Ever been in the men’s military barracks? You want to monitor/control/censor speech by men now?
Most people don’t hear about this unless it’s a republican candidate.

I have to totally agree. I’m a 59yr. Old woman that’s worked a combination of construction whirring and managing bars most of my life to support my children. The language and comment Trump used was not directed at me, my daughters or my granddaughters, nor y’alls. He was talking to another man thinking that it was just a couple of men talking to each other. After working on a crew of all MEN, that language is normal. In a lot of places it’s rough and crude but last time I checked there were no hidden mics. I know women get… Read more »

And please tell me where all the outrage was when Sarah Palin was called a cunt…Yeah, I didn’t think so. Hypocrites. 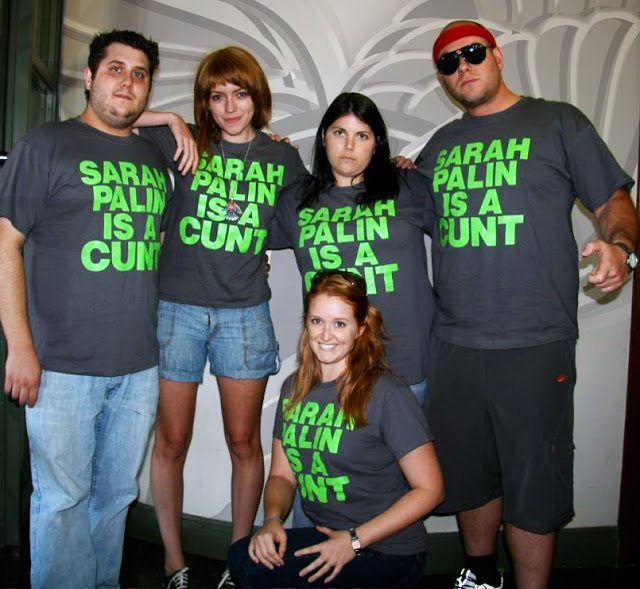 That’s the art of politics…they learn at an early age to talk outta both sides of their mouths and smile like a hyenna eating crap.

It’s the art of liberal politicians and their henchmen, the SRM. Declare a “republican war on women” yet call Sarah Palin a cunt and make fun of her disabled child. Never give credence to Bill Clinton’s accusers and call them tramps. Attack the pregnant child of a republican candidate yet leave the children of democrat candidates alone. Claim that Romney never paid his taxes and justify your lies because “we won.” Declare that Romney hates dogs and is unsympathetic to his employees and their family members who have cancer. No lie is too big for Harry Reid… Trot out women’s… Read more »

I don’t buy it.It has no facial hair or Adam’s apple whatsoever.This is the oddest piece of disinformation ever.I would call it a limited hangout but it’s not funny.This is a woman.I always sensed it and now that we know Michael is the First Lady it sealed it for me.Im in OZ and no one here wants to know because people see what they expect and want to see.The implications of these truths are far too disturbing for others to look at.These leaves Faul McCartney in its wake.