Know thy enemies of the Second Amendment.
From Yahoo (via Reuters): Bank of America Corp plans to stop lending to companies that make military-style firearms for civilians, Bloomberg reported on Tuesday, making it the second major U.S. lender to address gun sales after the Florida high school shooting that left 17 dead in February.
The company is in discussions with a few manufacturers who make military-style firearms for civilians, Bank of America’s vice chairman, Anne Finucane, told the news agency in an interview.
“It is not our intent to underwrite or finance military style firearms on a go-forward basis,” she said.
A spokesman for Bank of America declined to comment on the report.
Last month, Citigroup Inc added restrictions on firearm sales for new retail sector clients, requiring them to sell firearms only to customers who passed a background check, restricting sales for buyers under 21, and not sell so-called bump stocks or high-capacity magazines.
The second-deadliest shooting at a U.S. public school re-ignited the long-running national debate over gun rights, pitting many of the students who survived the Feb. 14 high school shooting in Parkland, Florida, against powerful gun rights groups like the National Rifle Association.
See also:

I have long since sold any BoA stock that I owned and have never been a customer because of their anti-2A stance.
“Speaking the truth in times of universal deceit is a revolutionary act.” Geo. Orwell

Is anyone going to connect, in that Ferrell video, the last stage, or red, alchemical transformation of that man, covered with dirt to represent a new soulless earth-bound man-kind fashioned by a Satanic priesthood, with the third red/dirt mural in B of A hdqtrs? It depicts a new man-kind, asleep in the earth, that scientists, here depicted as workers with idealized tools of light, will create and so forever end that idea that man was created by a God and with a supernatural soul. The middle B of A mural, for example, and years ago, depicts translucent male and female… Read more »

Dan . . . . You have brought out some excellent points. The one that really struck me was . . . “Or, is this mainly a spiritual war we can definitely win with prayer?” There is no doubt that the only way out of this conundrum is to enlist the powers of Heaven through fervent prayer.
God Bless America! God Bless Our Troops! God Bless Our President!

Seem every time the left hits an emotional high all the stupids jump on the ban wagon to strike back at gun owners. So again as I do in many cases BOYCOTT them if enough do it hurts there bottom line. So if your that stupid you don’t need our money.

We need a comprehensive list of businesses to boycott-I’ve completely lost track. Maybe post it once a week with the latest updates included,kinda like the Chicago Shootings posts. (Like Dr E. ,DCG and TD don’t have enough to do already.) Sorry-shutting up now.

“Like Dr E. ,DCG and TD don’t have enough to do already.”
How about if you help out by assembling the comprehensive list? 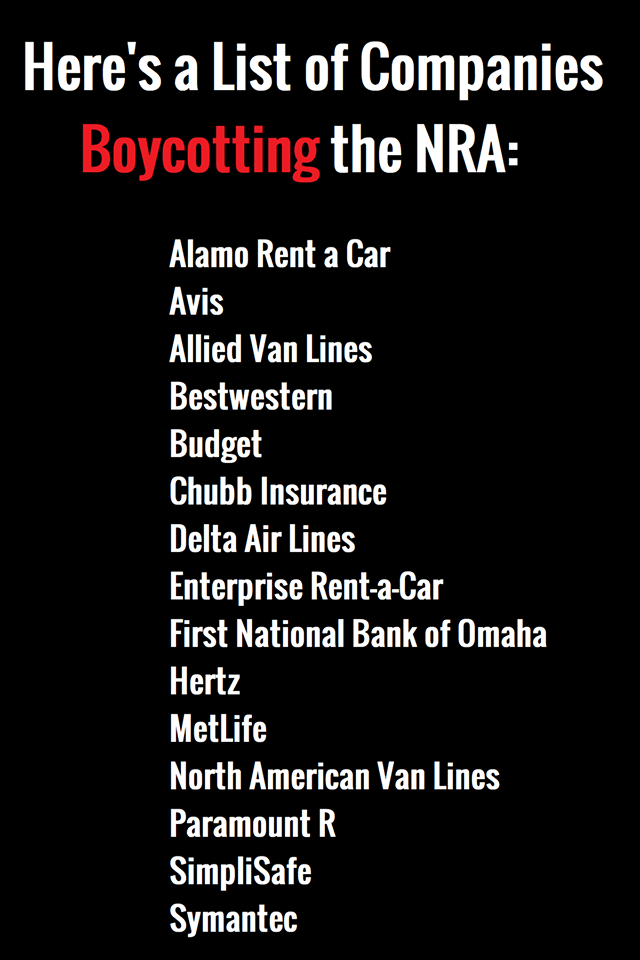 Does Bank of America or Citigroup lend money for any Planned Parenthood facilities? If so, they are accomplices of those who murder countless children in cold blood on a daily basis. Are they going to continue lending to them?

Maryaha . . . . That is an excellent point. I would rather imagine that if PP applied for a loan–these folks would be more than happy to aid them in their murderous endeavor.

My trustworthy bank is a bit faraway so I had to rely on Bank of America for a safe deposit box to keep documents at a moment’s ready. I opened an account. Overcrowded, two cashiers and two reps, half hour waiting for a simple transaction. Opened the account and had to close it, my account was used to pay a college dorm, it got corrected after a third try, money refunded. Another occasion money used for car repairs, I was reimbursed, it so happened that every time I made the deposit, the money was extracted. I was outraged, and told… Read more »

credit unions are the way to go…boa is a snake that strangles the financial life out of its victims (customers).

MomOfIV . . . . I certainly do agree with that. The Oregonians Credit Union (which used to be only for employees of The Oregonian Newspaper, but now anyone can use them) opened a branch about six blocks from me. When I decided to purchase a new car, I was able to get a loan at 2.25% which was much lower than any of the banks were offering. I love the convenience, and the fact that it is a conglomeration of folks helping each other.

On the other hand, Wells Fargo is doing something right — resisting union threats to drop gun manufacturer clients.
https://reason.com/volokh/2018/04/08/wells-fargo-resists-union-threats-aimed

Dr Eowyn . . . . I am very happy that Wells Fargo is not caving to public sentiment. Anything that any “teachers union” wants has to be bad for the citizens of this nation.

Stovepipe . . . . Your experience with BaA truly is gross. That you should have to pay to cash a check drawn on their flamin’ bank is just gross. How many remember back in the late 1960’s when banks were offering toasters, electric skillets, etc. in order to entice new customers to open an account with their bank. As far as I am concerned, banks put the “gangster” in “bankster.” I have been 100% against this bank ever since they came out against the Boy Scouts due to the Scouts stance, at that time, on not having leaders who… Read more »

Marxist politics must be profitable– did someone tell ol’ Karl?

Why would a bank (or any other business) want to join the political circus? This constitutes a coercive public action by an entity that has no authority to treat individuals or groups differently due to belief.

I told Bank of Amigo to go pound sand way back when I found out they were issuing credit cards to illegal invaders.
Haven’t missed them in the least.

I feel that any bank that took a bailout from the American people during the banking crisis should never be involved in politics, as that makes them picking winners and losers from the citizens who helped them. BOA got 20 billion in direct money and a guarantee of 118 billion in direct losses. So I have to say, Bank of America, goodnight and good luck. MomofIV, I have to agree, that credit unions are the only way to go. Saying that, we use a credit union, and a local bank and a national bank. We are not wealthy, by any… Read more »

We have some horror tales of using the big banks. Never went back. Switched to a large credit union years ago and have had nothing but excellent service. No complaints yet.
I wonder if Bof A has any armed guards or if any officers are gun owners?

Does Bank of America feel a little judgmental—which extends by this act to their patrons who support the second ammendment? They should remember this: People are free to withdraw their accounts from Bank of America and establish their banking business elswhere.

Easy have the gun businesses declare themselves to be queer, apply for a loan, and then sue their asses off.