Homosexuality is abjured and supposedly illegal in Muslim countries, but a form of homosexuality called bacha bazi is a common “cultural” practice, which, of course, points to their hypocrisy.
But bacha bazi isn’t just a homosexual practice, it is pederasty (sex between an adult male and an adolescent boy) and outright pedophilia, when the boys are prepubescent. Even worse, bacha bazi is really a form of boy-prostitution and often coerced.

Bacha bazi is a form of pederasty which has been prevalent in Central Asia since antiquity…. Visiting Turkestan in 1872 to 1873, Eugene Schuyler observed that, “here boys and youths specially trained take the place of the dancing-girls of other countries….” [T]he dances “were by no means indecent, though they were often very lascivious.” …
Bacha bāzī (…literally “boy play”…) is a slang term in Afghanistan for a wide variety of activities involving sexual relations between older men and younger adolescent men, or boys, that sometimes includes child sexual abuse. The practitioner is commonly called bacha Baz (meaning “pedophile” in Dari)…. It may include to some extent child pornography, sexual slavery, and child prostitution in which prepubescent boys are sold to wealthy or powerful men for entertainment and sexual activities. Bacha bazi…is currently reported in various parts of Afghanistan. Force and coercion are common, and security officials state they are unable to end such practices because many of the men involved in bacha bazi-related activities are powerful and well-armed warlords…
A controversy arose after allegations surfaced that US government forces in Afghanistan…deliberately ignored bacha bazi. The US military justified this by claiming the abuse was largely the responsibility of the “local Afghan government.”

Do you still wonder why the Left in America and the West have made a tacit alliance with Islam?

Bacha Bazi is another example of Muslim insanity and hypocrisy.
Ongoing sex between men and boys clashes with their tossing of gays from rooftops for “breaking the law”. How is Islam a religion of peace?

Of course, “prison gay” rules apply, so only the guy on the receiving end is “gay” and subject to being thrown off a roof (usually by folk on the non-“gay” end): 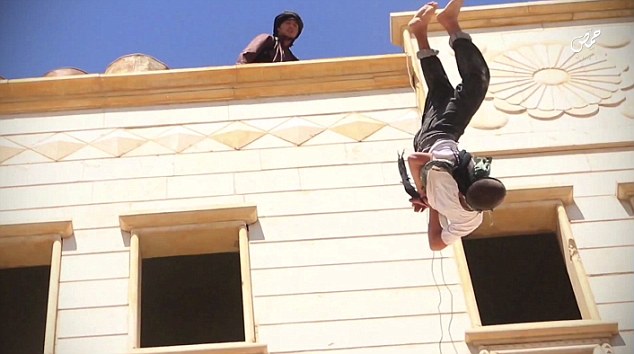 Watched a documentary on this years ago. They get around the homosexuality ban by saying that since they don’t love the boys, it’s not homosexual.
In other words, it’s pure child abuse.

Hey, it’s just Like Bill Clinton stating he didn’t have sex with Monica L. even though he was getting B.J.’s in the White House and he claimed it was not sex, Clinton must have had close connections to the islamic perverts on how to get around calling it not sexual. there all deserving of death including Clinton, even though he is not the topic of this article, but it goes to show the filth has no bounds.

Sinners are masters at justifying their sins

Further, the local government responsibility part is true. In the same documentary, a U.S. Army Major tasked with local relations went to the local honcho and told him that this child abuse needed to stop (especially as many of the local men doing it were on the U.S. Payroll. At first the Afgan just laughed it off, but when the Major insisted, the Afghan got visibly agitated and shouted, “What am I supposed to do? Tell them to go f**k their grandmothers?” You see the uselessness of religion without personal knowledge of God. Muslims aren’t allowed to touch a woman… Read more »

Yes, I forget the woman’s name who was here to speak and exposed this with photos. The Islamic “religion” is actually no religion at all, it’s a political ideology of total control and debauchery. These dummkopfs like former President Bush who stated, “Muslims worship the same God we worship,” are selling globalist destruction. If they believe that, they’re fools, but more than likely it’s part of their plans. Ugly for sure, disgusting filth.

The Pentagon went after our troops who’d try to stop the Muzzie pedophiles, too, under the last administration; I hope it doesn’t happen today, not with Trump & AG Sessions going after pedophiles here. I bet all of the GBTQL supporters that went to the pride parades, and those who have the “Hate Has No Home Here” or “Local Municipality Welcomes Everyone” signs on their lawns, have no idea what bacha bazi is. And if you explained it to them what it is, they still wouldn’t make the connection that it’s pedophilia gone a step worse cause they dress up… Read more »

This is truly disgusting! I’m still experiencing bouts of PTSD from reading John Podesta’s emails loaded with pedophilia terms and references to Spirit Cooking! But it’s not just Muslims, it’s also Jews and Christians. No religion or spiritual path is exempt from pederasty. Unfortunately, the higher you go up the food chain, the more prevalent it becomes. Just look at the British Royals! They’ve been well known for buggering children for centuries! Although I despise pederasty, it does not bring healing to the children of Abraham to point fingers at one another, as if one or another is exempt. We… Read more »

I’m beginning to think the Old Testament and the New Testament should never have belonged to the same book. They are diametrically opposed to one another.

When are the Dumbed Down American Public going to Wake Up to the Fact that there are no longer Two Parties (Left or Right) – but One War Party ever since they got their PNAC ‘New Pearl Harbor’ Coup on 911.
They have been using the Patriot Acts, NDAA, Etc, Etc, to get around our Constitution & Bill of Rights since 911 – Now Waging Wars against the American People & the Rest of the World.

And from ayatollah Khomeni:

Have they no goats? Remember, if you use a feather its kinky. If you use a chicken, it’s perverse!

We are in Afghanistan … why?

they should have their balls cut off and shoved down their throat, what filthy pedophiles they all are . our pedophile leaders which are many have most likely taken lessons from these evil Mohammad satanists.

How is it that members of one side of the matter—gay men and women in this case—will side with the enemy—Islam in this case—by crusading against “homophobia” and “Islamophobia?” (How is it that feminists WILL NOT defend a real woman victim from a real moral evil, or come out to come to her defense?) The answer is IDEOLOGY. Yes, Dr. Eowyn, it is fair and just to quote Orwell (whom I only recently discovered, thanks to Alex Jones, was a member of MI-6): “In a time of universal deceit, telling the truth is a revolutionary act.” St. Thomas Aquinas and… Read more »

let them all kill themselves off, it is there curse on them just as it was in Sodom and Gomorrah, and yes the children were destroyed also because of those sins. Gods sees into the future and he knows the minds of children also an what they will become, and its sad that not even one child was saved in Sodom , so it goes to prove God is no respecter of any person including children. When these filthy vile perverts meet God at judgement day they will howl and wail and beg God not to cast them into hell… Read more »

Not only do they keep tea boys, there’s a thing called mansex Thursdays in their culture, every Thursday they run around and sodomise each other. A friend who was a mp in Iraq in the first go around (1991) said one of the most common and hated duties was to go in the pow camps every night with nods (night observation devices) and beat the men back with a baton from whoever they’d ganged up on for butt sex, and drag the poor kid out. Every night. A crowd forms around the abuser and abusee, and after the abuser is… Read more »

[…] via Bacha Bazi: Muslim man-boy pedophilia — Fellowship of the Minds […]

These perverts need to learn how to self gratify themselves. At least they would leave the children and animals alone.
What a world of sickos. Gays support the enemy that wants them dead. Go figure.

“Gays support the enemy that wants them dead. Go figure.”
I know-that’s had me scratchin’ my head too. It’s like these idiots who keep supporting Obama in everything he does,despite being shown how he’s working to destroy the Country. WTF??? (Pardon the crude content.)

TJ, the whole world is so full of contradictions, it is hard to keep things straight. You have people supporting Hillary without doubt, cause she is for the little, poor people as she robs and pilfers from every source available and is now richer than most. We have up is down and in is out. Men can have sex with men without being gay considering their positions. And as you said the unrelenting supporting of Obama in spite of all the damage he was doing. I wish someone in the know would write a book explaining all the contradictions and… Read more »

I’d bet good money Barack Hussein Obama (Mother Jewish —father, unknown) is not only a homosexual but a pederast as well.

You don’t really expect anyone to take that bet, do you?

The Dancing Boys of Afghanistan on Vimeo
https://vimeo.com/11352212

Child marriage and pederasty are tolerated in Muslim societies where homosexuality is strictly condemned…
The hypocrisy of child abuse in many Muslim countries
https://www.theguardian.com/commentisfree/2010/apr/25/middle-east-child-abuse-pederasty

Nothing but a bunch of filthy pigs.

I clicked on this article right after reading the one by DCG about Muslims boycotting Starbucks, and I’m like…. Whaaat?!
These idiots are insane. Period.

It’s no secret that some of the Greek males, specially the Spartan males liked to bugger each other. It was considered “manly”. When Alexander the Great and his Greeks rolled into Afghanistan maybe the boy buggering was even to much to the Alex and his Greeks to take. Who knows what went on then. That was 8-9 hundred years before Islam was founded by Roman cleric Muhammad. One wonders if the little boy buggers of Rome and the Islamic buggers of Afghan are a mutual admiration society? One thing is for certain, the human? condition is extreme. Maybe there should… Read more »

Muhammad was a “Roman cleric”?! What are you smoking?

Hmmmm? Maybe he was the “Cleflo Dollar” of the Roman pantheon?

I’ve read that Mohammed was from a MERCHANT family.

Such things convince me that Mohammad is the “false prophet” and Allah is in fact Satan.

The Talmud teaches it is nothing (like a poke in the eye) if a man rapes anyone under the age of 3 (since they’re not fully human). He also has the right to kill that child since the child is guilty of “seducing” him.
I dare anyone to find such garbage in Christian teaching.
Are we beginning to see why Jews and Muslims are “natural allies”?

The Talmud was a direct response to Christianity. It is Satanic, through and through.